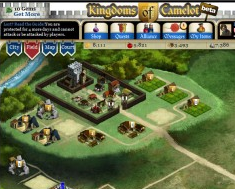 If 2009 was the year of farms and fish tanks on Facebook, then 2010 is the year that developers are remembering that the world of gaming has much more to offer. The strategy genre, in particular, is enjoying a renaissance on Facebook.

Strategy games seem like a bad fit for the average Facebook gamer, at least according to several commonly-held notions about who, exactly, a Facebook gamer is: someone who doesn’t enjoy conflict or competition, who only wants to play for a few minutes at a time, who has no desire to play games designed along traditional lines.

But that’s not stopping a string of successful strategy games, started earlier this year by Watercooler’s Kingdoms of Camelot. Although it was launched last November, Camelot took until January to start growing in earnest, reaching its peak in early June with over 3.7 million monthly active users. 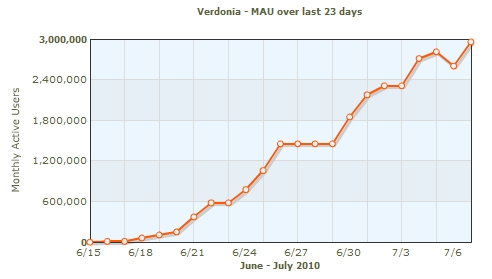 Camelot’s success seems doubly unusual, in that it’s an incredibly complex game — at least by the gold standard of dead-simple design favored on Facebook.

That game’s growth may have helped convince other developers to pay attention to strategy on Facebook. A short list of strategy releases this year would include Evony, PoxNora, Nanostar Castles, Age of Ocean, and most recently, Verdonia, The Settlers and Backyard Monsters.

As some commenters noted in our review of Verdonia, the game shares a number of mechanics with Evony. The latter game, owned by Regan Mercantile, licenses content from a Hong Kong company, so it’s possible that Verdonia uses the same source. Verdonia’s developer, Playdom, declined to comment on whether that was the case (as did Regan).

Whatever the case, either game serves as an example of how complex strategy can succeed on Facebook, so we spoke with both companies.

Playdom is best known as the publisher of games like Social City and Sorority Life, so Verdonia seems to stand out. But the company is looking to branch out and build a larger portfolio, according to chief financial officer Christa Quarles.

“I think what’s interesting there is that you have a lot of people trying it out,” Quarles said. “It’s at least demonstrative that there’s really a harder core audience out there. The initial art for the game, even, is not puppy dogs with big eyes. It’s medieval knights with swords. It validates our opinion, which is that there are harder core gamers on Facebook.”

Having a strategy game become successful is partially a function of Facebook’s size, which will give companies a lot of latitude to experiment in the future. “You’re going to see increasing production value, more niches being explored,” said Quarles. “At the end of the day when you’re talking about 450 million players on Facebook, 200 millionish users playing games, four games per month per user — there are a lot of game events on Facebook, and it’s not just going to be the softer, more casual end making hay.”

One problem for Verdonia may be a lack of continuing engagement from its new players. Although new monthly actives are streaming in, daily active users have been tough for the game to hold on to. Here’s a view of the game’s DAU as a percentage of MAU:

Verdonia could have various problems. It may be attracting some users who aren’t interested in strategy, or bugs could be driving some players away. Evony, on the other hand, has a solid DAU / MAU of 18 percent, along with its own web version that some players use without visiting Facebook.

Surprisingly, Evony also manages to attract a significant number of women, according to game producer Darold Higa — whereas an outside observer might assume it only caters to men, based on the geeky setting and art. “Thirty percent of our playerbase is female,” said Higa. “I think sometimes that’s missed, but there are actually whole alliances that are female.”

Evony is also a good example of how a game with fewer users than a more typical farming or sim game can be successful. Its users tend to have more discretionary income than other Facebook players, according to Higa, and they play a lot: three hours a day on average, to be specific.

That high level of engagement sounds more like a massively multi player game like World of Warcraft, but Higa thinks there’s potential for the two game categories to mix. “If you look at the Facebook audience, not everyone will want that complex gameplay,” he said. “But I think you will find a fairly large percentage will want more gameplay. I’ve played tons of strategy, usually on a dedicated client. The big hurdle is playing it in the first place.”

Mixing Facebook gaming with MMO-style play is certainly an attractive concept to other companies. What’s missing is the merger between typical MMO activities — like playing for a long time — and the quick-play style of Facebook that developers use to encourage players to pay for virtual goods. Evony, though, should offer some encouragement to others who want to make a more complex game.

“This may come from my gaming background, but I think that like movies, television and literature, if you create with the idea that you’ll only appeal to the lowest common denominator, you may be successful in the short run. But the entertainment that really appeals to people has a lot of depth,” said Higa. “People tend to dumb down content with the idea that it will reach that magical mass market. I think, if you have a really good game and you put it in front of the mass market, you may be surprised at how many people engage it.”