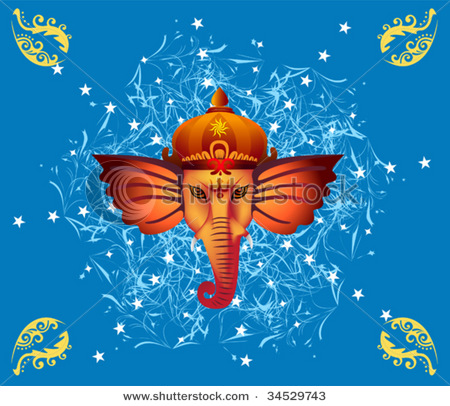 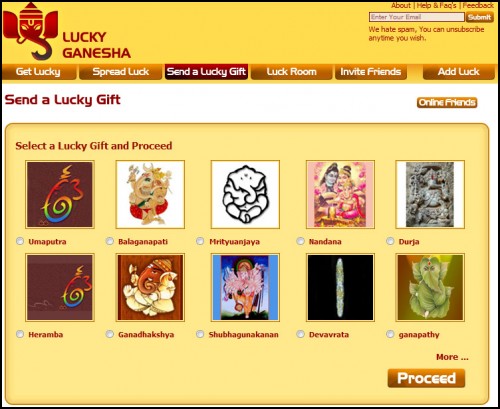 Having lagged behind much of the rest of the world, India is now among one of the fastest growing international regions for Facebook. Developers in the country are paying more attention, too, producing the sorts of apps that will be familiar to most users.

UTV Indiagames is one of those developers. Having made the experimental Cricket T20 World Championship sports app for Facebook, it now has another title out — a simple sharing app called Lucky Ganesha.

To provide a brief background on the concept, Ganesha is one of the deities in the Hindu religion. Easily recognizable due to the elephant visage, Ganesha extends into other religions, including Jainism and parts of Buddhism as well. Known as the Remover of Obstacles, Lord of Beginnings, and/or Lord of Obstacles, Ganesha is often associated with Lakshmi, the goddess of luck and prosperity, where the concept of this app likely took root.

So luck and prosperity is what the app wants to spread. Each day, when a user logs into Lucky Ganesha, they are greeted with a random proverb attributed to the deity, under various names. Examples:

Gaurisuta Says… “Do not mistake temptation for opportunity.”

Mundakarama Says… “May your thoughts be as glad as the shamrocks, may your heart be as light as a song, may each day bring you bright, happy hours that stay with you all the year long.”

Of course, these are only two examples, and there are dozens more to choose from. What is nice, however, is that there is more than just one’s daily “luck.” Users can spread the luck, as they see fit, in one of two ways. The first, and more general is simply receiving a random fortune or proverb and publishing it to all of one’s friends.

It’s basic, but if one is looking to be more personal, then they merely step on over to the apps’ simple gifting mechanic where they can pick and choose sayings to send to a friend directly. The only real downside, is that each “gift” can only be selected based on the character and not the saying. One doesn’t see the latter until after the pop-up to send it appears.

Beyond any of this, the only other element remaining within Lucky Ganesha is the “Luck Room.” It’s nothing terribly extravagant and merely acts as an archive of all the luck you have sent and/or received.

Considering that India is just now beginning to become heavily involved in Facebook (though mobile still appears stronger), it is expected that new games and applications would take a simpler route, as compared to some recent Facebook titles from older developers in places such as North America, China, and Japan. All the same, and as has been said a number of times before, simplicity means little so long as the package, in its entirety, is strong. While Lucky Ganesha is not an app that is going to appeal to everyone, for what it is, it works. As basic and dated as the concept of gifting anything is, each proverb and saying has enough depth to it to really make the reader stop and think and consider the going-ons in their own life. In the end, that’s probably the point of Lucky Ganesha, and in that, it does its job well.