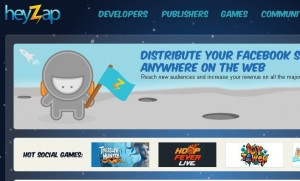 Heyzap has been building a portfolio of monetization features and other services that developers can integrate with their existing web-based games, and this week it launched a service that adds a new dimension — a way for social game developers to port their titles to the web, while maintaining existing Facebook communication channels.

The idea is to reach users who might enjoy playing social games but aren’t playing them on Facebook. While it uses Facebook Connect to let people send and receive information from games on Facebook, it uses its own payments system as a substitute for developers’ in-game virtual currencies on Facebook.

For those not familiar, the company already offers services like virtual currencies, (including a dual-currency option), analytics, and ways for users share activities within games back and forth with friends on Facebook and Twitter. Overall, it is already supplying 25,000 games to 150,000 website, and has 2700 developers signed up for its services.

Inside Social Games: What results have you seen with your virtual goods service so far, especially the dual-currency option you introduced last December? (Dual currencies may include both an earnable and for-fee currency, although many types exist — the intention is to allow both non-paying and paying users to advance in a game). 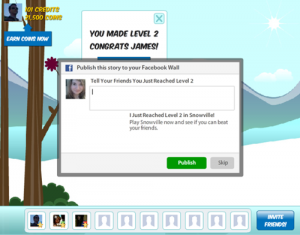 Jude Gomila: The model of applying dual currency to casual games is in interesting one. So far, the games that performed the best on our old system were MMOs and RPG based casual games. One of the downsides to applying dual currencies to casual games is the product life cycle – it’s too short to spend a lot of time iterating on the game. With social games the product life cycle is open ended and the developer is used to continuous iteration and tweaking, which is much more suited to refining monetization performance and viral loops. We found introducing the incentivization currency into the casual world made the games much more viral. Games with avatars or complex virtual goods monetized the best with casual games, goods like “level packs” don’t monetize that well. Moving on from casual, Heyzap has opened up new APIs to allow social games to work outside on the wider web. Our first games to go live are Hoop Fever Live by TheBroth and FishStory by RaccoonX. Since launching, we have had a ton of inbound requests from publishers to get the social games onto their sites and many more social games developers that have started integrating. We can take a Facebook game into a single SWF file if the game is primarily in flash or an Iframe solution for the non-flash games.

ISG: How does lifetime value, ARPU and ARPPU compare to social games, MMOs etc, as well as other competitors?

JG: The lifetime for casual games tends to peak in the first 1-3 months and then flatten out. Furthermore, there are usually no live updates coming in from the developer. With the social games, the developer is live updating the game, tracking and tweaking the variables, which really helps boost APRU. Because the life cycle and number of plays per game is so much shorter for casual games the model becomes more of an “eCPM” model rather than an ARPU model. We are seeing a 3-10x higher ARPU with the social games compared with the casual, however MMOs are performing comparably well with the social games on an ARPU level. The social games have the added benefit of being able to attract more users than the casual and MMO games so overall make more absolute profit.

ISG: How do you see social games coming to the web “doubling the market size?” What will online game users, especially the casual game users who parallel the market, find more interesting about Facebook games than the many download and Flash games available to them already?

JG: Taking a social games out to the wider web taps into completely unleveraged user bases. This is a completely new move for the market but early results from our testing show that the conversion rates for getting users and monetizing them are similar to Facebook for English speaking websites. If you take the example of Farmville.com it is seeing insane traffic and working very well using Facebook Connect on it own portal. Furthermore, the recent move by Zynga taking Farmville to MSN shows a clear trend in this direction. The Facebook games are more “interesting” because they are more viral and make better money, meaning the publishers will just start replacing the content focus with social games. Also Heyzap gives website publishers XML feeds of the social data, which can be used in the website’s own feed to build in retention that is publisher centric.

ISG: From that, can you explain how users can play on and off Facebook against each other in a way that people will find compelling? Which Facebook features appear to be the most viral so far:

“Heyzap works with Facebook Connect APIs and simulates all the classic viral loops that Facebook developers use inside of Facebook including stream posting, gifting and inviting friends.”

The classic viral loops work in and outside Facebook. Gifting, sharing, inviting, allowing users to interact with each others’  Aquarium/Farm, having a friend’s leaderboard etc all drive traffic to these games and our publishers. Also being outside Facebook opens up new avenues, such as messaging users on the website they are on, creating leaderboards for the publisher community or even twitter. It is still early days in our launch and we will be announcing more features in this space.

ISG: What other unique opportunities are becoming available by providing social games to the rest of the web?

IA: Getting your sci-fi social game game on scifi.com or getting your car Racing game on nascar.com has never been possible. Apart from content appropriate distribution we will also be allowing publishers to plug into game data, so that you can do notifications outside Facebook and better interact with publisher community. This is a unique opportunity to get in front of more of the right users and also get new forms of retention not possible in Facebook.

ISG: “Heyzap believes that Facebook Connect is the best platform to build on and has the biggest future potential.” What about Twitter, MySpace? Anything else?

IA: Facebook is the biggest, fastest growing, and most mature platform. It is still early days in the socially connected web and we will explore new opportunities as they become important. One of the key reasons to chose Facebook was to make the game developers transition as easy as possible. Right now if you have a Facebook game you don’t have to change any of your server side callbacks.