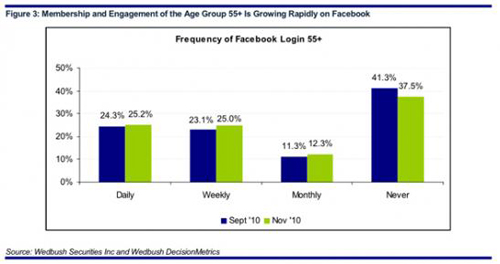 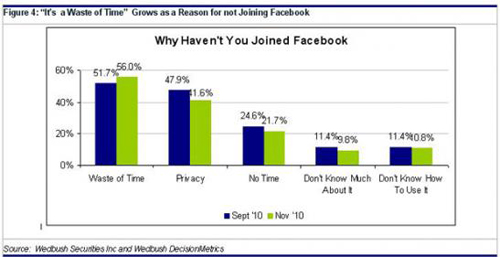 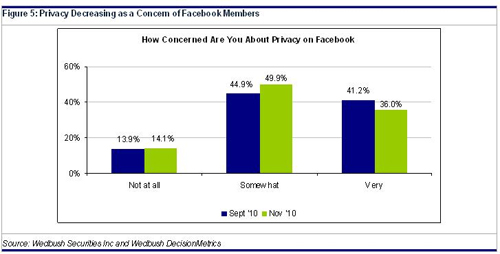 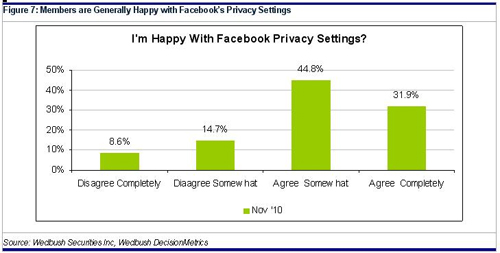 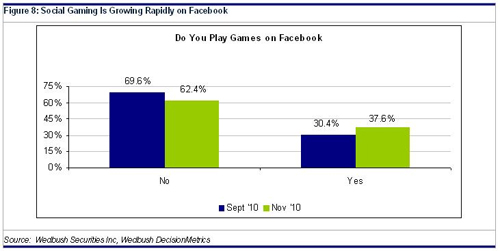 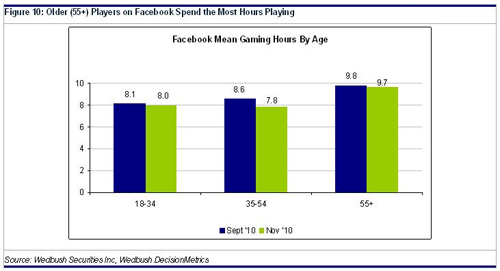 older players on facebook spend the most hours playing 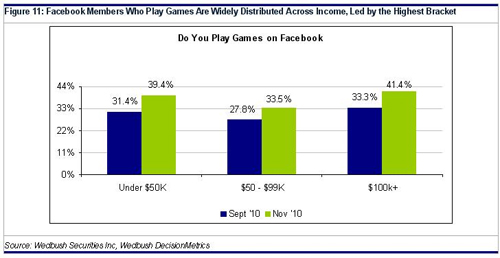 the number of facebook friends per member declined slightly 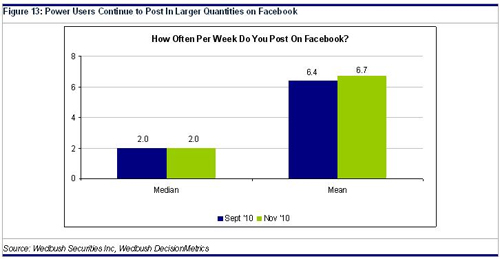 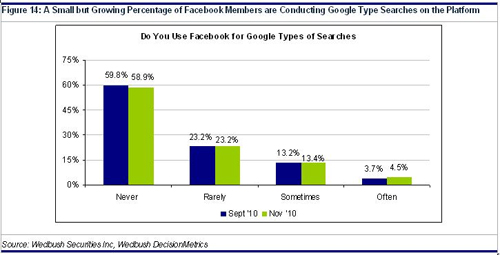 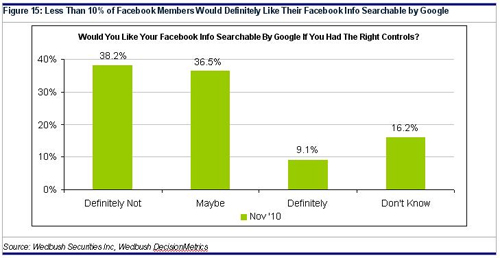 less members would like to be searchable by google 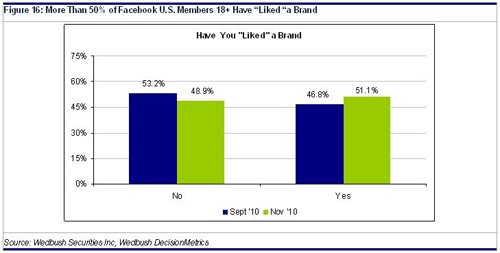 more US members liked a brand 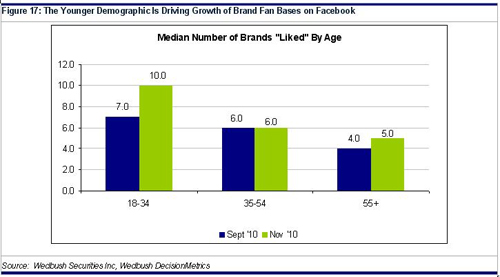 the younger members are driving growth of brand fans 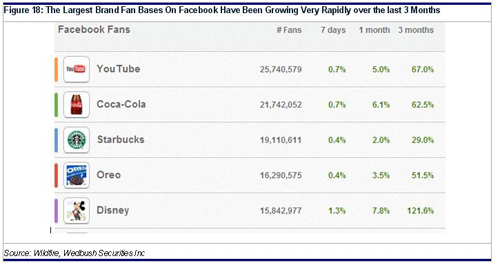 brand fan bases on facebook have been growing rapidly

In our second bi-monthly survey of 2,500 U.S. consumers 18 and older about their social media habits, we found that user behavior evolving rapidly, but most metrics continue to go up and to the right for the major social media platforms.

Facebook continued to grow its U.S. 18+ membership at a 22% CAGR over the past two months.  In addition, engagement continues to grow, with the percentage of Facebook’s membership becoming daily visitors increasing at an 11% CAGR.  LinkedIn also continued to grow membership (up 12.3%) and engagement, with the number of people visiting the site multiple times a month up 42%.  The Twitter audience dipped, but we note that given the sample size, the drop was not statistically significant.  In the following pages, we present the most relevant findings from the survey as they relate to Facebook.  We’ll review findings for the other social media platforms in future publications.

As discussed above, Facebook continues to grow its reach and engagement:

The fastest growing demographic on Facebook is the age 55+ group, which is growing its membership at a 44% CAGR, with the number of 55+ logging on daily growing by more than 24%:

With so many people using Facebook, we continue to be interested in understanding the reasons that people are not joining.  We find it interesting that “It’s a Waste of Time” was the only answer to increase over the previous two months, making us think that Facebook is such a phenomena, that people who aren’t members increasingly need to believe it is a waste of time, rather than other reasons, to justify their behavior.

In addition to non-members, as the graph above indicated, Facebook members also appear to be less concerned with privacy then they were just two months ago, with the percentage of members indicating they were “Very” concerned decreasing by more than 10%.

We think there are multiple reasons for the decreasing privacy concerns by Facebook members.  First, we note that Facebook privacy issues were in the media a lot during the earlier part of the year, and the media has moved on for the moment.  In addition, Facebook has continued to evolve its privacy settings, and more than 80% of users indicate they know how to use the settings, and more than 65% have actually changed the settings at least once.  (We didn’t ask the next two questions in our September survey, so we just have a snapshot/one survey worth of data to present):

Not only are members using the privacy settings, but, surprisingly, over 75% of Facebook members indicated that that are “somewhat happy” or “happy” with Facebook’s privacy settings

Social gaming continued to grow rapidly on Facebook, with the percentage of members stating that they play games on Facebook growing at over a 200% CAGR in the last two months—and this is before the recent record setting introduction of Zynga’s Cityville.

Gaming is growing among every demographic, with 18-34 year old members leading the way.

When looking at game playing by income, it’s apparent that gamers come from across the income spectrum, with social gaming having the highest penetration in the highest income bracket, a fact that portends well for companies helping brand advertisers leverage the massive social gaming audience.

We note a slight decline in both the median and mean number of friends members report having.  While we believe this to be largely a function of the rapidly growing user base, with newer members having fewer friends, we also believe there is a growing interest by some members in decreasing the number of Facebook friends in their increasingly cluttered newsfeed.  Noted VC Fred Wilson recently tweeted that he was instituting the “wedding/Bar Mitzvah rule” on Facebook.  If he wouldn’t invite a “friend” to one of those events, he won’t “friend” them on Facebook.  While we still believe a larger number of friends to be a status symbol for many members, the number of friends will be an interesting trend to follow.

Facebook continues to be more of a passive experience for the majority of members 18+, with half of the members reporting that they post less than twice a week.  The median posting rate has stayed consistent since the last survey.  However, driven by power posters, the mean/average number of posts continues to climb at a 32% CAGR, reaching 6.7 posts per week.

Many investors continue to see Facebook as a potential threat to Google, so we track member usage of Facebook to conduct “Google type” searches.  While more than 80% of Facebook members continue to indicate that they “rarely” or “never” use Facebook for “Google type” searches, the percentage of members who are grew at a 38% CAGR over the last two months, and Facebook is putting in minimal effort to make search on the platform comparable to what a user gets from Google.

While privacy remains an issue, there are those—including the father of the internet, Tim Berners-Lee—who believe that Facebook and other social networks are “closed silos of content” that may threaten the Internet’s status as a “single, universal information space.”   In this latest survey round, we asked Facebook members if they would like their Facebook information searchable by Google if they had the right controls.  Almost 40% said definitely not vs. 9% who answered definitely yes.

Facebook passed a milestone recently with more than 50% of U.S. members 18+ now reporting that they have “Liked” a brand.   While there are multiple reasons that people “Like” a brand (i.e. to highlight their affiliation, to get discounts/deals…), we believe the value of fans will increase over time, which will lead to an increase in the cost of acquiring fans.

Not only are more people “Liking” brands, but they are also “Liking” more brands, particularly in the younger demographic:

The growth in “Liking” brands found in our surveys is reflected in the accelerating growth in the number of members who have “”Liked” the top brands on Facebook.  As can be seen in the chart below, the average fan base for the largest five brands (in terms of fans) has grown more than 66% in just the last three months, a CAGR of over 600%!   The top brand, YouTube, has been “Liked” by more than 25 million Facebook members, or more than 4% of Facebook’s 600 million members. （source:secondshares）