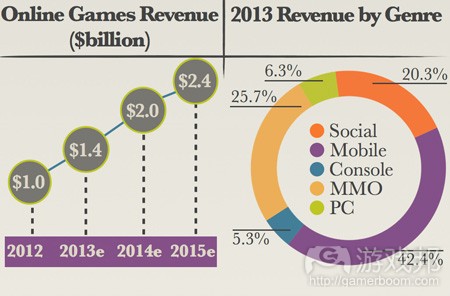 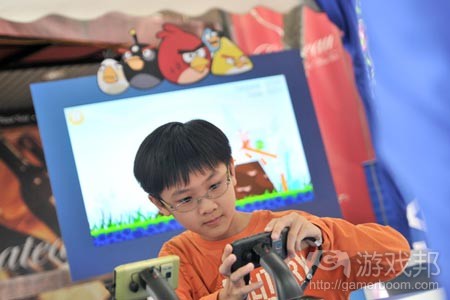 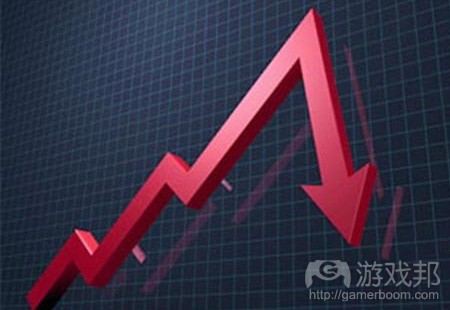 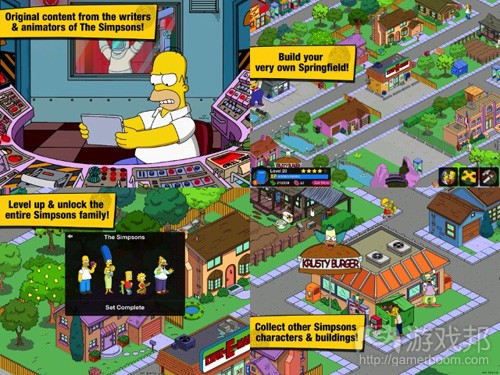 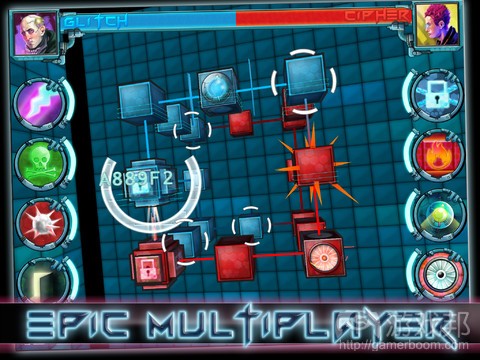 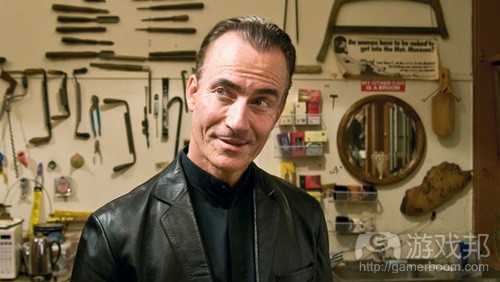 There’s no question that there are a lot of large, emerging markets for mobile games.

Recently, we considered China’s in a world context, and then we went on to ponder the potential of India, Indonesia and Thailand.

But what about the world’s fifth largest population, a founding member of the so-called BRICS – Brazil?

According to information from research company SuperData, the Brazilian games market in 2012 was worth $1 billion, which is estimated to rise to $1.4 billion in 2013.

Significantly, it reckons mobile gaming is the biggest sector; accounting for as much as 42 percent of revenue – $580 million in 2013.

SuperData also predicts there are around 115 million monthly active mobile gamers; that’s out of a population of 200 million.（source：pocketgamer）

Xbox, Playstation and WiiU should watch their backs as more gamers go mobile.

Mobile gaming is the fastest growing segment of the video game market, as revenues are expected to double from $13.2 billion this year to $22 billion in 2015, reports Gartner.

It is thought that this rapid growth has been driven by global mobile sales, which CCS Insights predicted to hit 1.86 billion this year.

Not only that, but these devices are becoming increasingly sophisticated, offering progressively higher quality gaming experiences that aren’t far off the quality of the high-end consoles.

These results have come as Sony, Microsoft and Nintendo release their next-generation consoles, to a market that is possibly moving in a new direction when it comes to gaming.

The NDP Group recently reported that 53 per cent of kids a gaming more on a mobile now compared to a year ago.

Brian Blau, research director at Gartner, said: “As mobile devices (smartphones and tablets) continue to grow, the mobile game category will show the biggest growth due to the entertainment value provided by games compared with other app categories.”

The result focus on video game consoles, handheld video games, mobile games, and PC games – with handhelds such as the PSP Vita and Nintendo 3DS and 2DS being the only sector predicted to decline from 18,064 this year to 12,399 in 2015.

A large portion of growth in mobile games has come from emerging markets, who are no longer replacing old PC’s with new ones, but with tablets, and have more access to smartphones than they do handheld games.

Not only that but mobile games are considerably cheaper than those in all other sectors of the market, making it more appealing.

As if to underline the challenges of the Chinese games market, the start of the week has seen strong falls on some company stocks.

Changyou shares were down 20 percent, losing around $380 million of market cap, while KongZhong dropped over 18 percent.

Meanwhile, China Mobile Games & Entertainment group [NASDAQ: CMGE] saw its shares down over 8 percent, Shanda Games [NASDAQ: GAME] was down 6.6 percent, and NetEase [NASDAQ: NTES] was down over 10 percent.

In total, around $2 billion was wiped off the value of Chinese gaming companies.

Significantly, this downward pressure was seen across the majority of Chinese technology stocks floated on the US NASDAQ and NYSE exchanges.

This included platform companies such as Baidu [NASDAQ: BIDU] and Qihoo 360 [NASDAQ: QIHU], both down over 3 percent.

It’s currently the season for companies to report their financials for the three months ending 30 September 2013. Consumer sentiment from China has been hit by weak sales of consumer goods such as cars and liquor; something that seems to have been passed onto gaming stock.

Another factor is that some stocks have been near their 52-week highs, suggesting some investors might be banking their gains.

Revenue was $695 million, down 2 percent year-on-year.

Breaking out EA Mobile’s performance, it generated sales of $75 million during the quarter.

This is despite the company announcing The Simpsons: Tapped Out has generated $100 million in lifetime sales, Plants vs. Zombies 2 has been downloaded 25 million times on iOS, and that Real Racing 3 has 18 million monthly active users.

As ever, EA pointed to its growing slice of digital games sales in order to demonstrate its ability to meet current and future market trends.

Across the board, net revenue from digital sales was $450 million, up 39 percent year-on-year.

“While we have made good progress in the first half of the year, we remain focused on executing our FY14 plan and delivering a full slate of amazing games and services to players on current and next-generation consoles, mobile, and PC.”

In terms of cashflow, over the past 12 months, EA generated $342 million, down 30 percent year-on-year.

The company ended the quarter with cash, equivalents and short-term investments worth $1.4 billion, up $7 million compared to the previous quarter.（source：pocketgamer）

In a postmortem of his game PWN: Combat Hacking printed on Pocket Tactics, mobile developer Erik Asmussen says the iOS market has become too crowded for even a successful title to pay dividends.

“Many things that used to work (press, Apple feature, free promotions) have lost effectiveness,” Asmussen writes. “Even when all these things fell miraculously into place, the revenues simply weren’t there.”

“This would be great if sustained, but hanging on to these spots is nearly impossible without an ongoing feature in the App Store or a huge install base,” he explains. “The scary thing is that these numbers are actually pretty good for an iOS title.”

While the game garnered better-than-typical press attention upon release, middling reviews and certain design quibbles caused PWN to drop off the radar shortly after launch, and no amount of updates and free promotions could regain that lost ground.

“The free app market is [arguably] even tougher to compete in, because all the big money players are now staked out there and it takes a massive ad spend to get anywhere close to the number of players you might need to get decent revenue,” says Asmussen. “While [PWN's performance is] not a disaster, it’s a pretty weak return given a year’s worth of time and my expectations for the game’s potential.”

As a result, Asmussen says he’s now focusing his efforts elsewhere than the app store. “iOS is just not a market that I think is viable for me to compete in any more, let alone depend on as a sole source of income. Instead, I am developing games using Unity and targeting several other platforms first.”

“The most important benefit of this shift is that it opens up a ton of new avenues for promotion and distribution that were unavailable to me as an iOS developer,” he adds. “I know these markets are still highly competitive and have their own problems and obstacles, but they don’t feel like the dead end that iOS appears to be now for someone in my position.”（source：gamasutra）

GamesBeat 2013 — our fifth annual event on disruption in the gaming industry — is underway! Check out the live video feed and full event coverage

Such advice may seem self-evident, but Mahoney feels too many mobile developers are eager to cash in on the latest App Store trend.

“Our message is: Don’t make junk. You got into the games business because you love games,” Mahoney said during a GamesBeat 2013 fireside chat covering the growing influence of Asian game developers on the U.S. industry. “A lot of what you see in the App Store is based on a fast-follower strategy. And fast follower is really a euphemism for copycat.”

In other words, while it’s tempting to prioritize a strong monetization strategy over good, solid gameplay, the truth is that the two feed into one another. The more immersive the game, Mahoney feels, the more likely players are to keep playing long-term. And the longer they play, the more likely they are to spend money.

As it continues to try to build on its presence in Western markets, Nexon hopes to apply some of those lessons to its own games. A large free-to-play developer originally founded in Korea, Nexon is eager to develop a truly international presence. Now that titles like the immensely successful free-to-play arena game League of Legends have broken out in the U.S., Nexon sees what Majoney calls a “massive opportunity” in the West.

Such in-depth free-to-play experiences have largely been confined to PC at this point, but that doesn’t need to be the case, said Mahoney. The technical gap between the PC and mobile devices is smaller than ever, giving rise to the potential for in-depth free-to-play games on phones and iPads.

With that, Majoney hopes the mindset among Western free-to-play and mobile developers will begin to shift: “When you think of mobile devices, you mostly think of casual games. But you can make a very immersive experience. When you do that, the metrics are as good as they are on PC.”

As for Nexon, Mahoney envisions his studio spearheading a future in which the Eastern free-to-play philosophy is matched with high-quality Western game design.

Whatever that ultimately entails, Mahoney hopes that Nexon isn’t alone in its aspirations: “I hope Western gamemakers continue to pursue free-to-play in a passionate way. And don’t copy stuff. Because copying stuff is the road to bad business.”（source：venturebeat）

7）Trip Hawkins: Women have taken over tech purchasing, and video games are next

GamesBeat 2013 — our fifth annual event on disruption in the gaming industry — is underway! Check out the live video feed and full event coverage.
REDWOOD CITY, Calif. — Serial video game executive Trip Hawkins has his eye on a new market: women.

“For the first time in history, women have taken over technology-buying for their families,” Hawkins said on a panel discussion about mobile advertising at GamesBeat 2013, VentureBeat’s annual game industry conference.

This development is only a couple of years old, said Hawkins, who founded gaming giant Electronic Arts and Digital Chocolate and who now runs London-based studio If You Can. Traditionally, manufacturers segmented home appliances into two categories: “white goods” for the kitchen and laundry room, such as dishwashers and blenders (bought by women) and “black goods” for the living room and den, such as video game consoles and TVs (bought by men). But that’s changed, starting with the advent of the iPhone and iPad, Hawkins said. Now moms are the primary purchasers of electronics for their families, and they’re also the ones who manage their families’ media. (Women also spend more than men on virtual goods in games.)

“This is a really big social-cultural change, and it’s going to open up dozens of new markets — both for the women and for their kids,” Hawkins said.

For instance, game publishers who want to reach underage users could advertise to their mothers via “mommy blogs,” Hawkins suggested.

Animoca chief executive David Kim, who was also on the panel, agreed with Hawkins.

“I’m surprised more game developers haven’t caught on to the whole ‘women’ genre and the strength of it,” Kim said. ”There’s definitely a more steady buying power [from female players] that we’re noticing in our own games.”

Kim also pointed out that brand advertisers haven’t yet exploited mobile-social games. Right now, most ads that appear in these games are for other mobile-social games. In the future, however, brands that want to reach specific demographics will be able to target these games — so the day may soon come when moms playing Candy Crush Saga will see ads for General Electric dishwashers.

As for the rest of the industry, Hawkins repeated the classic advertising advice: Get in front of your customers wherever they already are.

For instance, Hawkins said, ”What preteen kids are doing is looking at a lot of YouTube videos. They really get into it.” So if your game encourages kids to share YouTube videos or has created an ecosystem of related YouTube videos (like this hilarious Minecraft video), that’s a good thing.

Another place to find customers: mobile-messaging platforms like WeChat and Kik. These are already seeing heavy use from many consumers, so building games — and game advertising — on top of these platforms makes perfect sense.（source：venturebeat）