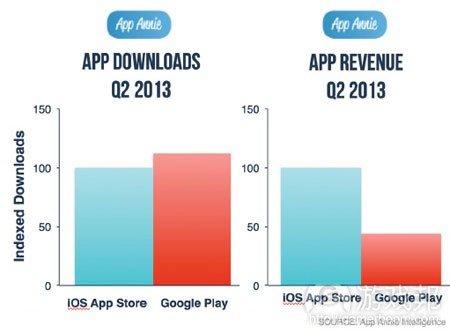 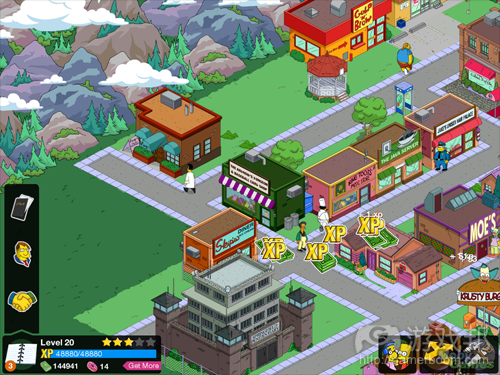 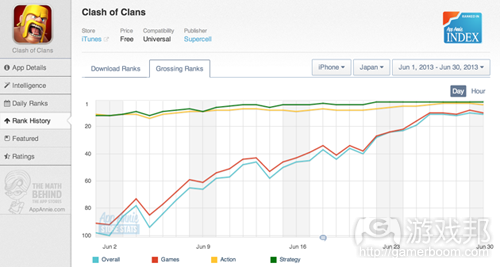 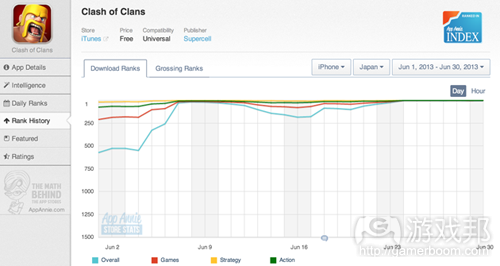 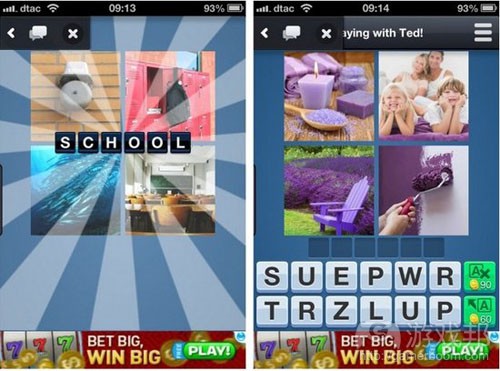 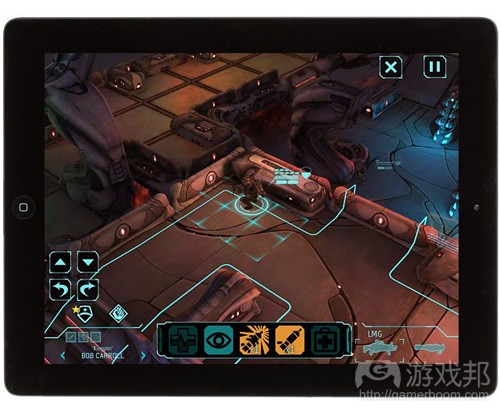 Another quarter passed. Another totting up from App Annie.

The app store intelligence outfit has been estimating the competition between the main two app stores during April and June 2013.

It reckons Google Play is now the leader in terms of downloads; 10 percent more than Apple’s App Store.

That’s not too surprising as the install base of Android devices continues to grow very quickly.

Of course, not all Android devices can access Google Play, notably those in China. The growth rate is also being driven by low-end devices in emerging countries.

And that’s why App Annie puts revenues from the App Store as still being significantly ahead – 2.3 times, in fact.

The places to be

In terms of what’s driving this activity, games remain the largest category.

App Annie reckons they account for 80 percent of revenue on Google Play and 75 percent on the App Store.

US (#1), China, Japan, the UK and Russia are respectively the top 5 countries in terms of download volume on iOS.

When it comes to iOS revenue, the order is US, Japan, UK, Australia and China.

Revenue-wise, however, it’s Japan, followed by South Korea, the US, Germany and the UK.（source：pocketgamer）

2）Value of quarterly activity in The Simpsons: Tapped Out estimated at $58 million

Revealing that The Simpsons: Tapped Out now has 5.4 million daily active players, Kim point out that was ‘more than EA Mobile had across all its games in 2012′.

Indeed, as EA’s Q1 financial filings reveal, the game generated more cash between April to June 2013 than at any time since it launched (technically relaunched) in October 2012.

Bucks are the in-game soft currency, which players earn.

Alternatively, they can buy the hard currency – called donuts – and convert them. This give us the opportunity to perform some real rough back-of-ticket math.

Obviously, we can’t say that the game is generating this amount of cash, merely that players’ activity (if purchased) would be ‘worth’ $58 million.

Interestingly, this value fits within the known revenue range, given that EA has said The Simpsons: Tapped Out generated $23 million during its first quarter (back in 2012), and now it’s making more money than ever.（source：pocketgamer）

For all its success in the West, Finland-based Clash of Clans developer Supercell didn’t really have its foot in the door of the massive Asian mobile games market. Likewise, Japanese Puzzles & Dragons developer GungHo has enormous success in its home region, and needed some traction in the West.

So the two teamed up to cross-promote each others’ free-to-play games last month, and now analytics firm App Annie has offered a bit of insight on how the cross promotion has helped Supercell in Japan. It’s data that other Western-based publishers and developers should pay attention to.

During June, Clash of Clans (available only on iOS) rose from the 98th overall iPhone app to the 11th by the end of the month on Japan’s top-grossing charts. Japan didn’t drive as much
growth as the U.S., China and Turkey, according to App Annie, but the June iPhone graph for the game’s Japanese revenue growth is telling, nonetheless (note that App Annie’s report doesn’t
include iPad figures):

There was also a dramatic rise in Clash of Clans’ download rankings on iPhone in Japan, following the promotional partnership with GungHo on June 6. The announcement plus an update for
Japanese language support later in the month boosted the game from below 500 on the all-apps download rankings, all the way to the top.

On the worldwide iOS charts from App Annie, Clash of Clans was number one, topping both King’s Candy Crush Saga and GungHo’s Puzzle & Dragons (which topped Google Play’s top-grossing charts for the month).

Supercell ended up holding the top spot on the monthly revenue charts for June on iOS, while GungHo dropped from first to third.（source：gamasutra）

Zynga is suing the makers of casual sex app Bang With Friends over claims that the app infringes upon its With Friends series of games.

Bang With Friends Inc – the company behind the app of the same name – registered its internet domain last year according to the complaint, filed in San Francisco.

While there’s little actual connection between Bang With Friends – which pairs up Facebook friends anonymously for casual sex – and Zynga’s library, the social giant alleges that the company chose the name with “Zynga’s game trademarks fully in mind.”

If successful, the court order will prevent the creators of Bang With Friends from using the name, with Zynga also receiving compensation for any damages. （source：pocketgamer）

Zynga has confirmed the launch of its newest game, 1 Word, on mobile social messaging app Kik. The Kik platform passed more than 50 million users earlier this year, and features a variety of applications (called Kik Cards) and in-house developed games. However, Zynga’s picture-based social game is the first game on the Kik messenger platform from a third party games developer.

Zynga is known for stating that it always wants to reach players wherever and whenever they want to play, and the launch of 1 Word on Kik is a reflection of that goal.

1 Word is similar to Lotum’s “4 Pics 1 Word” (our review), in that it contains sets of images and then asks players to find the word that connects them all.

Blank letter tiles represent the key word, and players must spell the correct word using only the letter tiles in the available letter bank at the bottom of the screen. However, where 1 Word differs from “4 Pics 1 Word” is in its multiplayer component.

Instead of a single-player experience, 1 Word allows players to guess a word and then wait for their friends to do the same, guessing the exact same word from the same set of pictures. If both players are successful, they receive coins and stars marking their current winning streak.

Coins are also available for purchase with real money, and they’re used back in the game to remove tiles in bulk from the letter bank or instantly reveal a letter in the final word.

Players can also purchase the VIP upgrade to remove ads for $1.99.

1 Word is now available to play for free on the Kik messenger app, which is also available to download for free on iOS, Android, and more. Once users have accessed the Kik app, they can
find 1 Word by opening the app menu and tapping on “More.” 1 Word is currently the top featured Kik Card in the app.（source：insidesocialgames）

The premium price tag for 2K Games and Firaxis’s XCOM: Enemy Unknown on iOS certainly caused a stir around these parts.

For Take-Two CEO Strauss Zelnick, however, the XCOM: Enemy Unknown launch was a “success” and “illustrates that consumers are willing to pay a premium price for a premium entertainment”.

The turn-based alien blaster, which was a port of an 8-month-old PC and console game, hit the App Store for £13.99 / $19.99 last month. It entered the Top 10 Grossing apps chart on iPad in
the first week.

“This bodes well for the opportunity to deliver profitably our most immersive triple-A titles to mobile platforms as they evolve,” Zelnick said.