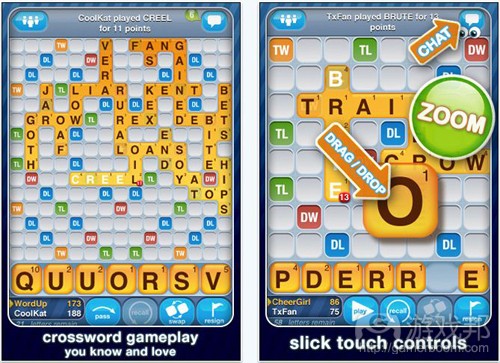 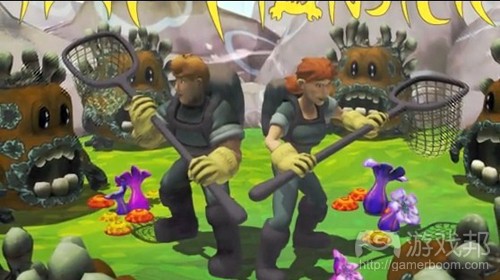 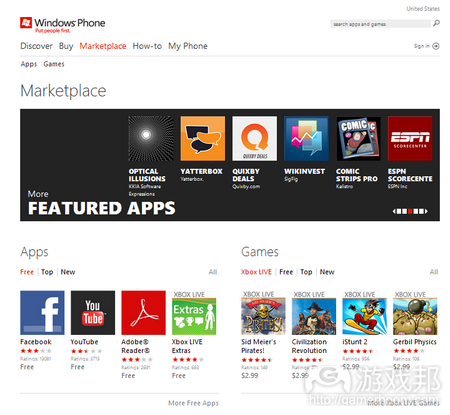 1）Zynga reports highest ever bookings for Q1 at $329M

Daily active users are up 6 percent year-on-year from 62 million to 65 million. Monthly unique users are up 25 percent to 182 million from 146 million in Q1 2011. Zynga also says its increased monthly unique paying users from 2.9 million in the fourth quarter of 2011 to 3.5 million. Zynga released six games during Q1 2012, four of them mobile: Hidden Chronicles, Zynga Slingo, Scramble with Friends, Dream PetHouse, Dream Heights and Draw Something (which Zynga acquired just before the end of the quarter). Last year, Zynga only had CityVille on its release calendar for Q1 — and that game is still top dog on Facebook at 41.6 million monthly active users and 6.6 million daily active users today.（source:insidemobileapps）

During today’s earnings call, Zynga revealed it had grown to 21 million mobile daily active users, compared to the 12 million DAU it had in Q4 2011.

COO John Schappert says that the bulk of the growth was organically generated by Words With Friends, Scramble With Friends and Zynga Poker. Draw Something, while boasting impressive numbers all on its own, didn’t become a part of Zynga until very late in the quarter — which is why it didn’t account for more of that growth. Mark Pincus explained that the game’s monthly unique users were factored into Zynga’s Q1 2012 earnings; it’s monthly unique paying players were not.

Schappert also pointed out on the call that Zynga Poker — a three-year-old mobile game — finally broke into the No. 1 spot on Android’s Top Grossing chart, having already achieved that distinction on iOS. Apple also recognized Words With Friends in March as the No. 1 free game app of all time.（source:insidesocialgames）

3）Draw Something acquisition was a ‘rare’ opportunity for Zynga, says CEO

While just last week Zynga CEO Mark Pincus mentioned that he wanted to “aggressively pursue” more companies like the recently acquired Omgpop, the executive took a more cautious stance during a recent earnings call, noting that purchasing the Draw Something studio was a “rare instance” for the social game giant.

During the company’s financial earnings call on Thursday, Pincus said that the $180 million acquisition of Omgpop only made sense because it fit in perfectly with the Zynga’s financial strategy and growing mobile business.

“[After Words With Friends,] Draw Something was the second major product line that we went out and acquired. It was a rare instance for us,” Pincus said. “We believed it was not just accretive financially, but we were excited about its growth and what this game meant for mobile and social gaming.”

Pincus added that the Omgpop’s Pictionary-inspired app offered a new take on social connectivity and viral growth, making it an unusual resource that offered something completely different than the rest of the Zynga catalog.

Going forward, Pincus said Zynga still plans to take a cautious approach to acquiring other companies, and will only go after new deals if they make sense and augment the company’s bottom line.

“It does not represent a change in our strategy or our approach to large investments in our data, analytics and hosting infrastructure. At every point, we have been very careful, prudent, and bottom-line oriented to make investments where we could connect the dots to an accretive return,” he said.（source:gamasutra）

He joins a growing list of notable game designers who have turned to crowdfunding platform Kickstarter and fans to front the bill for their new projects — recent success stories include campaigns from Tim Schafer (Psychonauts), Jordan Weisman (Shadowrun), and Brian Fargo (Wasteland).

Garfield hopes to raise $40,000 in pledges by May 5 to fund a free-to-play location-based adventure title called Map Monsters. In the game, players capture monsters that they can find in different physical areas. It will release for iPhone and iPad initially, and will eventually receive an Android port.

The designer has teamed up with BodSix, a Seattle-based independent studio that specializes in location-based mobile and social games, to create Map Monsters. The team is made up of veterans from companies like Amazon, Apple, Pixar, and Wizards of the Coast.

The Kickstarter campaign is offering credits for virtual goods, signed posters, Map Monsters shirts, a “game night” with Garfield, and other incentives to donators. So far, Garfield and BodSix have received around $10,000 in pledges, a fourth of their goal.

5）ComScore: Amazon’s Kindle Fire Now Has Over Half The U.S. Android Tablet Market (And All The Mindshare?)

On the same day that Amazon will be releasing its quarterly earnings, some research from comScore underscores just how far the company has come since launching its Kindle Fire tablet in November 2011.

The researchers say that as of February 2012, Amazon’s Kindle Fire now accounts for 54.4 percent of all Android tablets in the U.S. Given how many different models of Android tablets there are out in the market at the moment, that gives it a strong lead over the rest of the field: the whole range of Samsung Galaxy Tab tablets, added together, only accounted for 15.4 percent of the market, with the Xoom following at seven percent, comScore said.

That’s an embarrassing state of affairs for a company like Samsung, which has not only flooded the market with different-sized devices but was an early mover in the Android tablet space. And these figures also emphasize just how much work Sony has ahead of it in its battle to try to get more traction in tablets and mobile in general.

On the other hand, the small shares for so many manufacturers also, inadvertently, gives a good opening for Microsoft to entice OEMs to build on its platform to try to wrest share from Amazon and Apple and its iPad, which is still the most popular tablet of all — although its share of sales has decreased over time. Apart from Amazon, which is using a forked version of Android, no one has really made headway among consumers using Android to date.

It also points to the possibility that if Amazon can create a successful forked Android product, will we see others trying their luck using this route soon?

Of course, there’s more to making a successful product in the tablet market, and what Amazon has managed to do is create a price-busting ($199), content-rich product that not only has the benefit of Amazon’s own content relationships, but by getting a critical mass of tablet users it is also attracting third-party developers to make apps specifically for its platform.

Beyond that, Asus with its Transformer has made an almost equal impact as Motorola, with a 6.3 percent share of the market and Toshiba’s AT100 has a 5.7 percent share.

With some expecting Amazon to release a second model of the Fire with a bigger screen — and others speculating that Apple will do the same by releasing a smaller-screened iPad — the industry hasn’t really settled on which size tablet might be optimal. Some figures out from comScore give some insight at least into how different sizes get used.

Basically, when it comes to browsing, the bigger the better: a tablet with a 10-inch screen generates 39 percent more browsing than a tablet with a seven-inch screen, and a 58 percent higher consumption rate than five-inch tablets.  (That’s not too much of a surprise, really, since it’s much easier to browse the Internet on a bigger screen, but it does also point to the fact that over time we may see more content created to capitalize on this trend.)

ComScore’s numbers come from a new research division called Device Essentials, which tracks Internet traffic on a device-specific basis. Other types of data it collects are around smartphone and feature phone usage on an OS-level; how much smartphone traffic is carried by different operators; and traffic for specific content categories based on operating systems and devices; and whether people are using cellular network or Wi-Fi to browse.（source:techcrunch）

Owners of Windows Phone handsets who have yet to upgrade to version 7.5 of the firmware will soon find themselves locked out of the platform’s app store.

According to a post on the official Windows Phone blog, those running older versions of the OS will soon receive an error message when trying to download Marketplace content – whether new apps, or updates to those already on their device.

Moving with the market

“Starting in the next few weeks anybody who wants to buy or download a new app, update an existing app, or submit app reviews to Marketplace will need Windows Phone 7.5 on their phone,” detailed director of program management Mazhar Mohammed.

“Requiring Windows Phone 7.5 is part of a larger effort aimed at improving Marketplace performance and security, and paving the way for even faster growth and more new features.”

Microsoft has also removed the option to shop for Windows Phone apps from its Zune PC software, responding to stats that show Windows Phone users favour the on-device store or the recently launched web-based Marketplace

Said developments follow rumours yet to be denied by Microsoft that existing Windows Phone owners will not be able to upgrade to Windows Phone 8 – better known as Apollo – when it launches later in 2012.（source:pocketgamer）

One in our iPad owners have never purchased an Apple product before according to a new NPD report, with the device serving as an “introductory Apple device” for many customers.

The report, which surveyed more than 3,000 consumers across the US, suggests iPad is performing a function previously fulfilled by the iPod: serving as a ‘gateway’ product to the Apple brand.

“iPad sales are growing much faster than any other Apple product has this soon after launch,” explained Ben Arnold, NPD’s director of industry analysis.

“In fact, one in five Apple owner households has one – nearly equivalent to the number that own an Apple computer. This demonstrates the appeal of both the new form factor and Apple’s app ecosystem.”

While 70 percent of ‘long standing Apple owners’ say iPod was their first Apple purchase, that figure falls to 57 percent in the case of consumers who have joined the Apple train within the last two years.

NPD claims the fact MP3 playback is now incorporated into other portable devices means newcomers are increasingly being drawn towards non iPod devices, like iPhone and iPad.

Together, bith account for one third of all first-time Apple purchases since 2010.（source:pocketgamer）