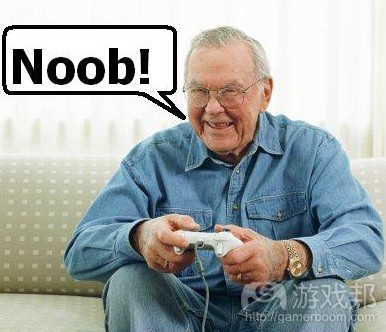 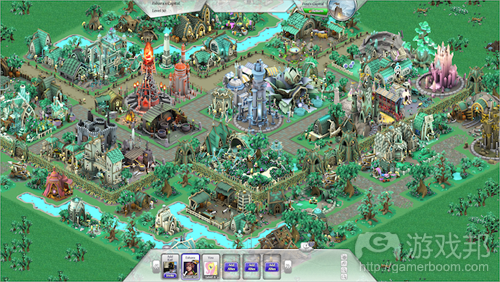 Facebook gamers: You can make your profile public again. Granma and granpa have a place to play without blowing up your News Feed now that Arkadium has inked a deal with Grandparents.com.

The New York-based social game creator has pushed 25 of its most popular games to the senior-focused website for visitors to play for absolutely free.

While Arkadium’s list features casino-style games, like Spider Solitaire and Blackjack, the majority of games includes Arkadium hits, including Mahjongg Dimensions and Eggz.

Unfortunately, folks with grandparents or parents wielding social network savvy are in trouble. Grandparents.com games will let players tweet links to their favorite games, “Like” their favorite games on Facebook and even share their high scores in the News Feed. Hey, at least grandmom and grandpop won’t be able to message you for in-game gifts.

“We are excited to be adding so many of Arkadium’s games to our site,” Grandparents.com Director of Social Media and Benefits Club Jennifer Fragale said in a release. “Arkadium will provide a robust entertainment experience that grandparents and grandkids alike will find amusing.”

On second thought, we’re sorry mommom and poppop, please don’t stop playing with us. We would miss your accidentally-public-but-clearly-private messages on Facebook.（source:games）

2）THQ sells off casual publisher to focus on core franchises

THQ has sold off ValuSoft, its Minnesota-based publishing/distribution division for budget and casual PC games, to value-priced software company Cosmi for an undisclosed sum.

This sale is part of the publisher’s strategy to become “a more streamlined organization focused only on [its] strongest franchises,” like Saints Row. In January, THQ began to distance itself from titles that target casual audiences, after announcing its exit from the licensed games business.

THQ has struggled in recent months to recover from its weak holiday quarter, numerous layoffs, and other recent setbacks. It has seen higher-than-expected sales for Saints Row: The Third and UFC Undisputed 3 recently, but others have still predicted that the company’s days are numbered.

Carson, California-based Cosmi has sold budget-priced software and games for the last 30 years across more than 25,000 retail outlets. With this acquisition, the company claims to now be the second largest U.S. retail publisher of PC games and the #1 retail publisher in the value software category (both according to units sold).

“With the transition of the ‘Value’ PC business to Cosmi, our internal resources are now focused on our core video game portfolio where we can drive the highest quality performance and execution for our games,” says THQ president and CEO Brian Farrell.（source:gamasutra）

3）Build a fantasy alliance in Playdom’s Armies of Magic

Armies of Magic, Playdom’s new Facebook game, is a combination of fantasy role-playing, citybuilding and real-time strategy. It casts players in the role of a human, elven or dwarven army commander and tasks them with following an episodic storyline while bolstering their own offensive and defensive capabilities.

Players begin the game by choosing which of the three fantasy races they would like to represent. This choice affects the aesthetics of the player’s city, the units they will have available in combat and the storyline that the game’s main PvE component will follow. Players can choose between being male or female in their selected race, and may then choose between three different appearances for their character, with the differences being mostly in skin color. After an initial tutorial, players may then name their avatar whatever they please — though this name must be unique among the game’s worldwide player community.

There are three main components to gameplay in Armies of Magic: citybuilding, exploration and combat. In the citybuilding phase, players construct buildings for their race’s capital which then produce income, combat units and research. Players must balance their amount of production buildings with their “culture” value, which is an abstract representation of how happy the populace is. If the culture value drops into the negative, no new units or research may be constructed, and the player must build decorative items to build it back up again. All buildings take time to construct and may be hurried along by the expenditure of hard currency.

The citybuilding section is competent with a few minor interface flaws marring the experience. While in “Build” mode, for example, it is impossible to see the time remaining for other structures to be completed. Also, some popup windows feature a prominent “close” button while others do not, making it appear as if it is compulsory to press the “Share” button. It usually isn’t, but the inconsistency in the interface is a little frustrating at times.

Exploration occurs on a node-based world map, and this is where the majority of the game’s PvE story takes place. Players move from node to node (at an excruciatingly slow pace) by clicking on them, and are then presented with a dialog scene between the story’s characters. Depending on the situation, they are often then thrown into combat.

Combat itself takes the form of a strategic defense game. The player’s avatar and the opposing “hero” square off against each other from opposite sides of a side-scrolling battlefield. Both sides then expend “crystals” — a temporary currency only available in battle and not carried over between encounters — to summon various units, which continuously walk forwards until they reach an enemy unit. They will then attack the enemy unit until either they or the enemy lies dead. The exception to this rule is the “miner” unit, which is very weak defensively but is also the only means of acquiring additional crystals during combat. Combat continues until either the player or the enemy hero has been downed, at which point the player receives a score rating based on their performance in battle. They also have the opportunity to revive fallen units by expending a special currency expressly for this purpose. Alternatively, players may simply produce new units back at their capital, which takes time and costs soft currency.

Battles are simple to understand but fun to take part in, with the only niggle in the formula being the player’s inability to order their units to attack a specific enemy. This often leads to the computer-controlled opponent making rather “cheap” attacks by placing a ranged unit behind the powerful enemy “hero” character. It’s a relatively small issue, but it is frustrating when it happens — particularly as there is nothing that can be done about it.

Upon completing a story mission, the player unlocks “challenge mode” for that particular battle, allowing them to take it on again in an attempt to achieve a higher score. Players may challenge three difficulty levels of the battle and compare their performance against friends, with rewards on offer for beating difficult score milestones.

After reaching experience level 8, the player gains the ability to attack other players or defend their friends’ cities from attack. These battles unfold in a similar manner to the PvE battles, with the difference being that the armies involved are those built up by other players. This feature is asynchronous at this time, but a live combat arena, where players can compete directly against each other in real-time, is coming soon.

Players also have the facility to join guilds and chat in real-time with up to 39 other members at once. There is a guild leaderboard that ranks these groups by their player vs player battle victory rate, and guild leaders have the facility to either make their group open for anyone to join, or require players to submit an “application letter” first. Players may not create their own guild until they have reached experience level 10.

Armies of Magic is a deep game aimed at the more “hardcore” end of the social gaming spectrum, though it remains easy to pick up for more casual players. It features good production values in its audio, visuals and writing and provides strong social features with which players may enjoy the game together. The game’s few minor flaws, discussed above, aren’t enough to spoil what is a good-quality role-playing/strategy experience that has the potential to appeal to a wide audience.

Armies of Magic currently has 480,000 monthly active users and 170,000 daily active users. Follow its progress with AppData, our traffic tracking service for social games and developers.（source:insidesocialgames）

King.com’s Candy Crush Saga is continuing to leave other Facebook games in its confectionary dust, taking the top spot on this week’s list of fastest-growing Facebook games by daily active users thanks to a 53 percent gain of 380,000 DAU.

Electronic Arts had three games close behind Candy Crush Saga. Lucky Gem Casino took the No. 2 spot courtesy of its 320,000 DAU increase, a 320 percent gain. Lucky Gem Casino has been holding steady at around a million DAU for the past month but it’s seen a major traffic boost over the past few days, probably due to the new Monopoly-themed minigame that was added last week. Solitaire Blitz was up by 42 percent with a 260,000 DAU increase. Zuma Blitz jumped 48 percent with 240,000 DAU.

Disney Playdom’s Marvel: Avengers Alliance continues to benefit from the ongoing marketing campaign that surrounds the upcoming Avengers film, up by 100,000 DAU for a 5 percent gain. With five major hits (Iron Man, The Incredible Hulk, Iron Man 2, Thor and Captain America) leading up to this movie, polls are showing The Avengers as one of the most anticipated movies of the summer. With less than two weeks before the movie comes out, publicity for The Avengers is at an all-time high, and Marvel: Avengers Alliance is reaping the benefit.

The only other game on the list with a gain greater than 20 percent was 50 Cubes’s Fashion Designer, which gained 40,000 DAU for an increase of 40 percent.（source:insidesocialgames）