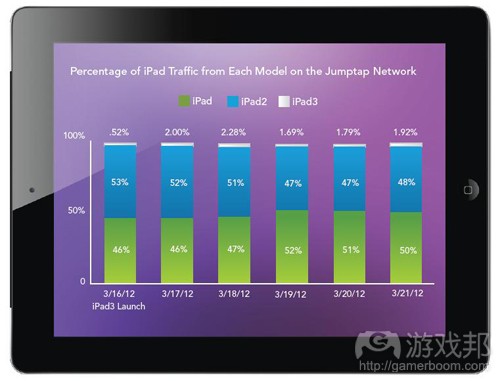 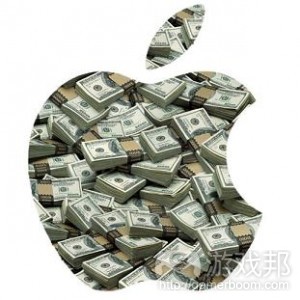 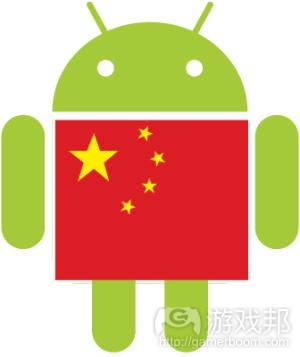 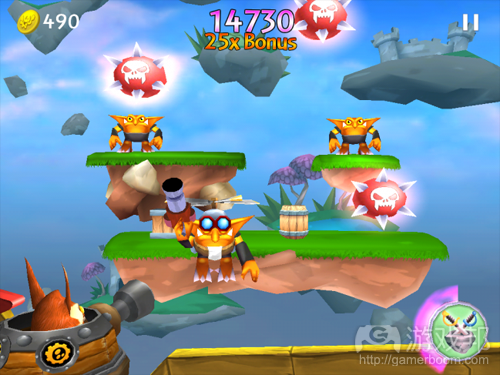 Apple’s latest iPad may have shot out of the blocks at launch, but numbers published by mobile ad network Jumptap suggest the tablet only generated a fraction of iPad traffic during its first week on sale.

According to the company’s monthly MobileSTAT report, third-generation iPad traffic represented around 0.5 percent of iPad’s total during its first 24 hours, peaking at 2.3 percent by its third day.

Commentators would suggest such a small level of penetration is to be expected and, indeed, arguably more interesting is CMO Paran Johar’s assessment of just who is buying the tablet in the first place.

In his view, iPad 2 owners are more likely than original iPad owners to pick up Apple’s latest tablet, which he understandably dubs iPad 3.

“A very early read of the data would suggest that iPad 3 is stealing traffic from the iPad 2,” he said.

“This trend suggests that iPad 2 users may be more inclined to switch to the iPad 3 than original iPad users.”

It’s an interesting assessment, if only because the technical leap instigated by Apple’s latest tablet is likely to make running a number of graphically rich games a rather jerky experience on the original iPad.

That’s a factor many believed would result in many owners upgrading.（source:pocketgamer）

Gartner is the latest market analyst to chip in its estimates for the tablet market. And guess what? It’s all about Apple.

The firm reckons overall tablet sales this year will hit 118.9 million units. Within this total, 62 per cent will be iPads. It’s a hugely impressive performance and shows that there’s little sign of other tablets threatening Apple’s dominance.

“Despite PC vendors and phone manufacturers wanting a piece of the pie and launching themselves into the media tablet market, so far, we have seen very limited success outside of Apple with its iPad,” said Gartner research VP Carolina Milanesi.

Will the Kindle Fire or the Galaxy Tab ever make a dent? Will the expected WinPho tablets threaten the Cupertino hegemony? Time will tell.

But Gartner’s numbers suggest only a slight Apple decline in share.

Although Instagram has proved that you don’t need anything as vulgar as revenue to make a ton of money, Apple has achieved its valuation the old way: by selling stuff.

Indeed, Apple has sold more than 315m iOS devices to date, and 172m of them in 2011 alone. The awesome popularity of its products has means it has more money than it knows what to do with – $98 billion to be exact.

And the death of Steve Jobs doesn’t seem to have had the negative effect some feared. The success of iPhone 4S, iPad3 and the expected moves into TV and mobile payments are prompting some market watchers to predict a 50 per cent rise in quarterly profits to $9.2bn when it announces its results later this month.

It now cost around $620 to buy one share in the company.（source:mobile-ent）

Researcher Analysys International claims Google’s Android OS more than doubled its smartphone market share in China from one-third at the end of Q1 2011 to 68.4 per cent by the year’s end.

Android’s rise to glory came while Nokia lost shares of its Symbian OS, which halved to just 18.7 per cent. This reflects the Finnish firm’s switch of focus at the top end to Windows Phones.

Additionally, China-based firms ZTE and Huawei would have made a significant contribution by providing Android devices to locals.

This rise is unsurprising given the general clamour – including some store egging and rioting – for the iPhone 4S from Chinese citizens.（source:mobile-ent）

Activision’s popular collectible toy-and-video game combo series Skylanders has made the jump to iOS devices in the form of Skylanders: Cloud Patrol. The new game is a touch-based shoot ‘em up for iPhone and iPad developed by Activision subsidiary Vicarious Visions, the team responsible for the Nintendo 3DS version of Skylanders: Spyro’s Adventure.

Skylanders: Cloud Patrol’s story surrounds the escape of some ill-mannered trolls from the prison in which they were incarcerated. It’s up to the Skylanders to defeat them using their airship, which is equipped with a large gun.

Gameplay unfolds as a form of “shooting gallery.” Players move from area to area, trolls pop up and must be shot with the airship’s cannon. This is accomplished either by tapping on an enemy or drawing lines to link them and form combo attacks. Combo attacks are worth significantly more points but put the player at greater risk of accidentally clipping a bomb with their finger — if one of these explodes, the game is immediately over. The game also ends if weapon-equipped trolls manage to fire a projectile at the player and it is not shot out of the air in time.

Progression uses a similar objective-based system to popular titles such as Halfbrick’s Jetpack Joyride. The player has three objectives on the go at any one time, and completing these rewards the player with stars at the end of a play session. Collecting enough stars causes the player to level up and earn five “gems” — the game’s hard currency which may also be acquired via in-app purchase.

Gems are used to purchase additional soft currency, unlock magic items that provide various bonuses and acquire other playable Skylanders. Each Skylander has an associated “element,” and the game provides bonuses to the player if they start a game using a Skylander matching the “Element of the Day.” This encourages players to collect more Skylanders in order to make quicker progress and earn more soft currency, which may be used to upgrade the effectiveness of items found during play.

Gems are not the only means through which players can collect Skylanders, however. If the player owns the physical Skylanders toys, they can enter the “Web Code” from their toy to unlock the equivalent character in Cloud Patrol. This is a sensible move that helps those who are avid collectors of the figures feel like they are getting additional value from their purchases — and from Activision’s perspective, it helps to strengthen the Skylanders brand across several different interactive offerings.

It’s also worth noting that it’s not necessary for the player to know anything about the Skylanders franchise to enjoy Cloud Patrol. It’s a simple, effective  iOS game that is a lot of fun to play and has been received well by App Store reviewers. It features strong social play via Game Center leaderboards and achievements, and monetizes in a non-obtrusive manner. Players can earn hard currency at a good rate through gameplay alone, but those who wish to make quicker progress have the option of purchasing it. Crucially, since this is already paid app, it never feels necessary to purchase gems to have a satisfying experience. In short, it’s an excellent addition to the iOS library of “easy to pick up, hard to put down” quick-hit experiences and deserves to enjoy some success.