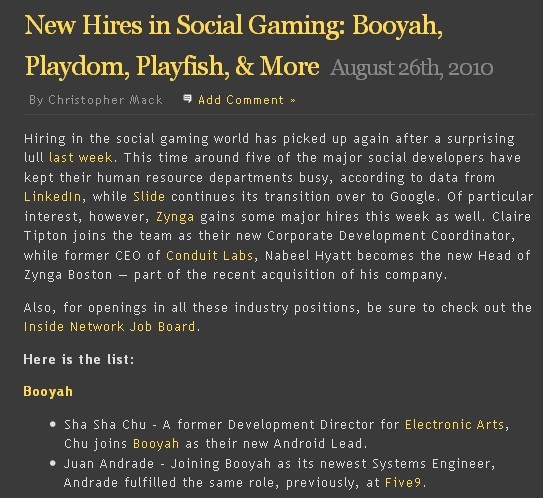 Hiring in the social gaming world has picked up again after a surprising lull last week. This time around five of the major social developers have kept their human resource departments busy, according to data from LinkedIn, while Slide continues its transition over to Google. Of particular interest, however, Zynga gains some major hires this week as well. Claire Tipton joins the team as their new Corporate Development Coordinator, while former CEO of Conduit Labs, Nabeel Hyatt becomes the new Head of Zynga Boston — part of the recent acquisition of his company.

Also, for openings in all these industry positions, be sure to check out the Inside Network Job Board.

* Jake Neri – Coming from LucasArts, Neri brings his experience as a Sr. Producer over to Playdom, where he will fill the same role.

* Akiko Abe – Prior to joining Playfish as part of their Public Relations, Abe was a Senior Account Executive at Cohn & Wolfe.

* Phillip Mauracher – Joining RockYou! as its newest Product Manager is Mauracher, who previously worked as a Product Ad Management Consultant at Google.

* Dan Kirk – Kirk moves from a Quality Assurance Manager at Slide to a Test Engineering Manager at Google.

* Kevin Ho – Now a Senior Designer under the Google tag, Ho was previously Director of Design under Slide.

* Travis Parker – Parker, on the other hand, was a Software Engineer under Slide, but keeps the same role under Google.

* Claire Tipton – As noted prior, Claire Tipton joins Zynga as the new Corporate Development Coordinator. Previously, she was the Merchandising Operations Coordinator at Williams-Sonoma, Inc.

* Nabeel Hyatt – Also part of the acquisition, is founder and CEO of Conduit Labs, Nabeel Hyatt, who is now Head of Zynga Boston.

* Michelle Koh Potts – Potts joins Zynga as a new Lead Project Manager. Previously, she was a Consultant for McKinsey & Company.

* Paul Austria – Formerly a Student at DigiPen Institute of Technology, Austria is now a Software Engineer for Zynga.

* Troy Sandal – Formerly a Development Lead for Zynga, Sandal moves up and changes roles as a Development Director.（source：inside social games）