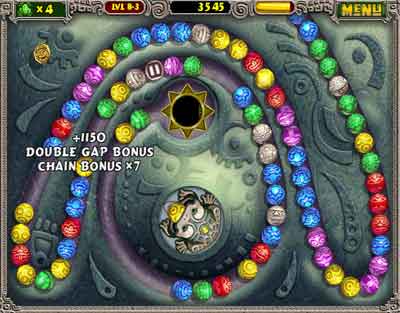 PopCap, creators of one of the most popular casual games of all time with Bejeweled, have announced they are bringing their secondmost popular game, Zuma, to Facebook.  The game has sold 20 million units worldwide in its iPhone, casual and downloadable forms.  The Mayan-themed game revolves around blasting small balls from the center pedestal at orbs that snake around the outside of the screen.  The Facebook version will have leaderboards and other social features.  Read more below.

It looks like the game will be launched into Beta in about 3 weeks, so early August.

“We’ve received a ton of feedback regarding how players consume Bejeweled Blitz and other leading social games, and incorporated a number of those insights into this initial phase of Zuma Blitz, with more to come,” said Jason Kapalka, co-founder and Chief Creative Officer at PopCap. “Zuma is a very different game than Bejeweled, so the social adaptation has gone in different directions. Zuma is already a fast-paced arcade game, so the challenge was to make it feel approachable to players of all skill levels, even with just sixty seconds to play.”

You can expect the game to include features similar to Bejeweled Blitz:

* An “experience points” system to unlock additional features and capabilities