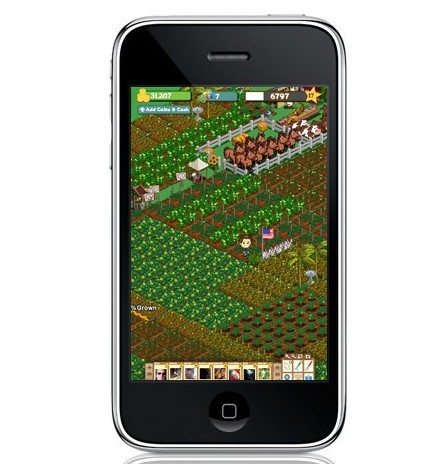 Earlier this month at Apple WWDC keynote, Steve Jobs invited Zynga CEO Mark Pincus to show off a new iPhone application: FarmVille.  The smash hit, which until now has been available exclusively on the web (mostly Facebook) is finally coming to the iPhone, and it going to make a killing. As MacStories first, the game is now available in the New Zealand App Store, and appears to be propagating to other countries worldwide — expect it to go live in the US later this evening.

Upon launching the game, users are asked to enter their email address to join FarmVille Mobile. You then asked to log in via Facebook Connect (so you can access your existing farm and friends), and whether or not you want to enable push notifications so you can get immediate alerts whenever you have crops ready to harvest (addicts will love this). The game seems to have made the transition to the iPhone pretty seamlessly — navigating your farm using the iPhone app is easy, and you can use pinch-to-zoom to hone in on a particular area. Executing an action usually just involves tapping on a patch of land.

The game is free, and will probably make a killing on in-app purchases. I give it 24, tops, until its the number one app on the App Store.