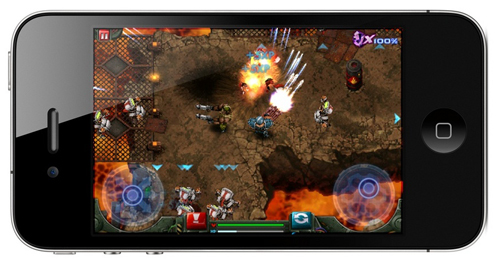 The rule of thumb is things change very quickly when it comes to the download total of free games.

Back in November, Glu Mobile announced its first two freemium games Gun Bros. and Toyshop Adventures had both done a million downloads.

A month on and it’s announced Gun Bros. now has over 2.8 million downloads, and the game is hosting 175,000 daily active users.

A topdown shooter, the key social aspect of the game is you can play with your friends’ characters once per day, giving you and them rewards, as well as encouraging daily play so your character is as strong as possible.

Glu continues to support the game, giving players three of the in-game War Bucks currency for upgrading to the new 1.2 release.

Holiday themed items such as Santa, elf and Frosty the Snowman hats and suits, as well as new armour and guns have also be included.

Finally, a third planet Haven has been unlocked. Playing here enables you to earn War Bucks. Previously these were only available if you bought them as in-app purchases.（source:pocketgamer）