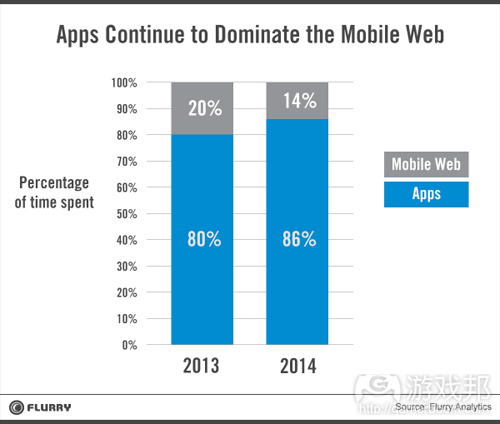 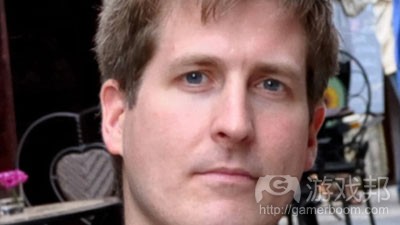 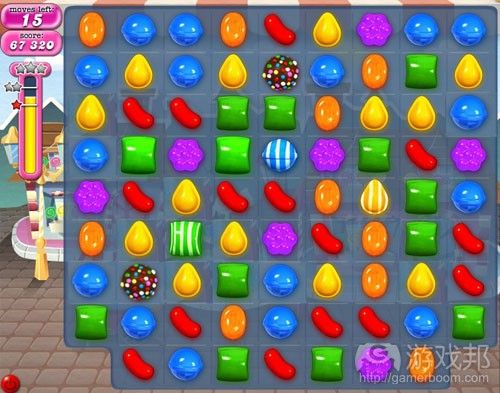 1）The mobile web is still losing out to native apps, by more than 6 to 1

Connect with leaders from the companies in this story, in real life: Come to the fourth annual VentureBeat Mobile Summit April 14-15 in Sausalito, Calif. Request an invitation.

Native apps command about 86 percent of U.S. consumers’ mobile time, or about six times more than the mobile web does, according to a mobile analytics report by Flurry.

Flurry said that apps were considered a fad a few years ago, but they are still completely dominating mobile usage. The browser is just one more app in a sea of apps on mobile.

“It is still too early to predict the trajectory apps will take in 2014,” Flurry said. “But one thing is clear — apps have won and the mobile browser is taking a back seat. Now every company in the world, including Google, is adjusting to that reality.”

This means that web technologies like HTML5, the lingua franca for the web, aren’t keeping up with the native app’s performance on mobile devices.（source：venturebeat）

Sony announced today that it has opened a new China Strategy Department in the Sony Computer Entertainment Japan Asia division.

According to the press release, which was published in Japanese on the website of SCE Japan Asia, the new department will be led by Sony executive Takehito Soeda. Soeda has previously served as Sony’s corporate communications manager in China, and his appointment to lead the newly-opened department suggests that Sony is interested in putting some official muscle behind pushing the PlayStation brand in China.

While game consoles have been available for purchase on the Chinese gray market for years, they were officially banned from being sold in the country until this year, when China’s State Council formally lifted the ban.

China’s Ministry of Culture is currently in the process of figuring out how — or if — it will allow consoles manufactured in the Shanghai free-trade zone to be sold in the country, and it appears that Sony is devoting resources to figuring out how to take advantage of that allowance.

Gamasutra has reached out to Sony representatives for further comment on the news.（source：gamasutra）

3）Oculus swipes yet another VR expert from Valve

Newsbrief: Oculus VR already snapped up a couple of Valve veterans last month — and today the company said that it has hired yet another Valve developer to help steer its virtual reality business in the right direction.

The company has announced the addition of Aaron Nicholls to its team. Nicholls has previously worked as a developer at Valve for the last four years, and in particular is known for his research into virtual reality tech.

This follows the news that Oculus has hired both Atman Binstock, Valve’s lead VR engineer, and Michael Abrash, another big name in VR at Valve. Nicholls took to Twitter to say that he “can’t wait to continue working on the future with Atman, Michael, and the Oculus crew tomorrow.”（source：gamasutra）

In a surprising move, Apple announced that it is removing its Top Grossing Chart from the App Store.  From now on, there will only be two top ranking charts – free and paid.   In typical Apple fashion, the company made this move at midnight last night, on the first day of April, without giving anyone any notice.
Apple released the following statement:  “We’ve noticed, as many of you have, that the games in the Top Ranking Lists have not changed in the past year.  We suspect it’s because the game companies in the Top 10 are spending millions of dollars a day to keep their position, but it could just be coincidence.  So, we decided to take the high road and give game companies the opportunity to compete on merit than money.”

It’s unclear what impact this will have on the success of games in the Top Lists like Candy Crush Saga or Clash of Clans, the future of free-to-play games, or the cost per install ad model.  In their S1 released anticipation of going public, King disclosed that they spent $377 million last year on marketing.

“Surely, we’re disappointed,” a King spokesperson admitted on the condition of anonymity, “but we’re highly confident that Candy Crush Saga will retain its top position because it’s an addictively awesome game.  Though, we do wish Apple made this move a week ago before we went public.”
In other news, Google made an announcement, that it is considering removing its top grossing chart, since the Top 10 games, who also happen to be the top advertisers, have been entrenched in the same position even longer than on the Apple charts.  Google is also considering creating a more rigorous approval process where they take into a consideration whether a game is a clone.

“It’ll require hiring more staff, but heck, we spent $3 billion earlier this year to buy a company that sells a smart thermostat for $250 that no one outside Silicon Valley has ever used,” said a Google spokesperson.  “Besides, 2048 derivatives of 2048 are being released on Google Play every 2048 minutes.  This is getting ridiculous.”（source：gamezebo）

[If you were wondering, yes this is an April Fool story...]

In a surprise move initiated by Michelle Obama, the US Congress has voted to crack down on Candy Crush Saga.

Calling King’s match-3 game a “danger to our children’s waistlines and its wallets”, the First Lady gained bipartisan support across both the Senate and House of Representatives for the deal under her Let’s Move program.

This is designed to solve the US epidemic of childhood obesity.

Out with candies, in with kale

The new legislation demands that King changes the game’s art style to include more fruit and vegetables.

Candies will now only become available after what Mrs Obama labelled at least five ‘healthy portion-sized matches’ of non-sugary foodstuffs.

“We want to set an example to our kids. A 3-way match of tomatoes or peas is okay, but we want them to do better,” said Mrs Obama.

“Can we inspire the next generation to make a 5-way match of superfoods like pomegranates or kale? Yes we can.”

The most controversial part of the new legislation involves the game’s in-app purchase system, however.

With many governments considering the issue of virtual purchases, particularly those targeted at children, there was widespread support for an additional clause forcing King to rethink its portion sizes when it comes to IAPs.

In an unprecedented move, the oversized governor of New Jersey, Chris Christie, demanded more extra moves for his dollar.

“Three Lollipop Hammers for a buck is unAmerican,” he fumed, while chewing on a rack of honey-glazed pork ribs.

“That sort of thing may cut the mustard in the socialist republic of Swedenland, but here in the good ol’ US of A, one greenback is worth nothing less than ten lollipops with chocolate sprinkles on, and as many Coke refills as I want.”

Rumours that the new law comes with President Obama stuck on Level 147 of Candy Crush Saga for over five weeks remain, as yet, unconfirmed.（source：pocketgamer）