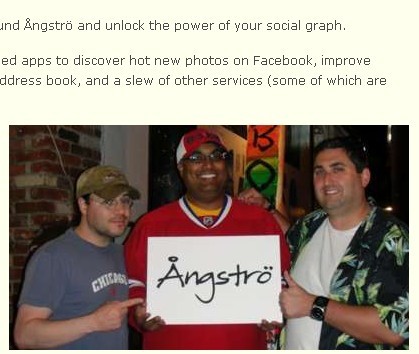 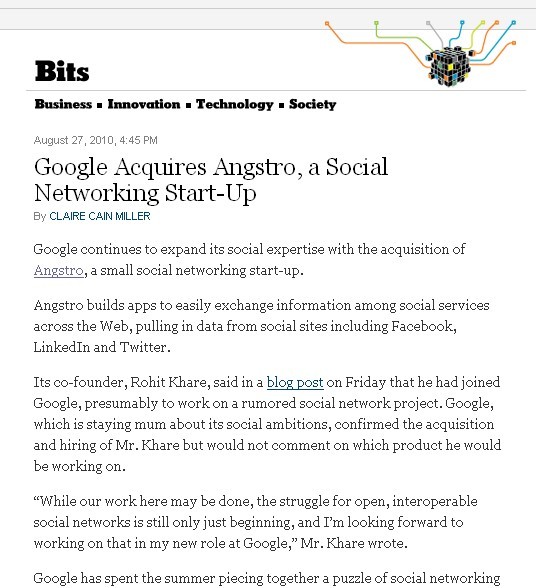 Google continues to expand its social expertise with the acquisition of Angstro, a small social networking start-up.

Angstro builds apps to easily exchange information among social services across the Web, pulling in data from social sites including Facebook, LinkedIn and Twitter.

Its co-founder, Rohit Khare, said in a blog post on Friday that he had joined Google, presumably to work on a rumored social network project. Google, which is staying mum about its social ambitions, confirmed the acquisition and hiring of Mr. Khare but would not comment on which product he would be working on.

“While our work here may be done, the struggle for open, interoperable social networks is still only just beginning, and I’m looking forward to working on that in my new role at Google,” Mr. Khare wrote.

Google has spent the summer piecing together a puzzle of social networking companies, technologies and engineers.

Over the past few months, it has invested in Zynga, which makes online games that people play on social networks, and acquired Jambool, which builds apps, virtual goods and virtual currency for social networks.

Google also acquired Slide, which makes apps for social networks, and Max Levchin, a Slide and PayPal co-founder, now works at Google. Earlier this year, it bought Aardvark, for getting questions answered by people in your social network.（source：nytimes/sohu）

Almost four years ago I set out to solve a deceptively simple problem: 95% of the Google Alerts I received about the entrepreneur Adam Rifkin were about the Hollywood movie director instead.

I worked with Salim Ismail, another “pub/sub” pioneer with a disturbing doppelgänger to co-found Ångströ and unlock the power of your social graph.

With the help of investors like CommerceNet and advisors such as Avery Lyford, our team shipped apps to discover hot new photos on Facebook, improve Caller ID by using LinkedIn profiles, adding style and links to Twitter, create a real-time social address book, and a slew of other services (some of which are open source).

On the warm summer evening of August 20th in West Hollywood on the world-famous Sunset Strip, however, our original quest to disambiguate Rifkins came to a head. As anyone can tell from our incontrovertible photographic evidence, Ångströ is clearly separating the director of LOOK from the director of 106 Miles!

Salim and I would like to thank everyone who was part of the adventure — not least, the thousands of users and beta testers who helped define our products and inspired our whole team.

While our work here may be done, the struggle for open, interoperable social networks is still only just beginning, and I’m looking forward to working on that in my new role at Google.