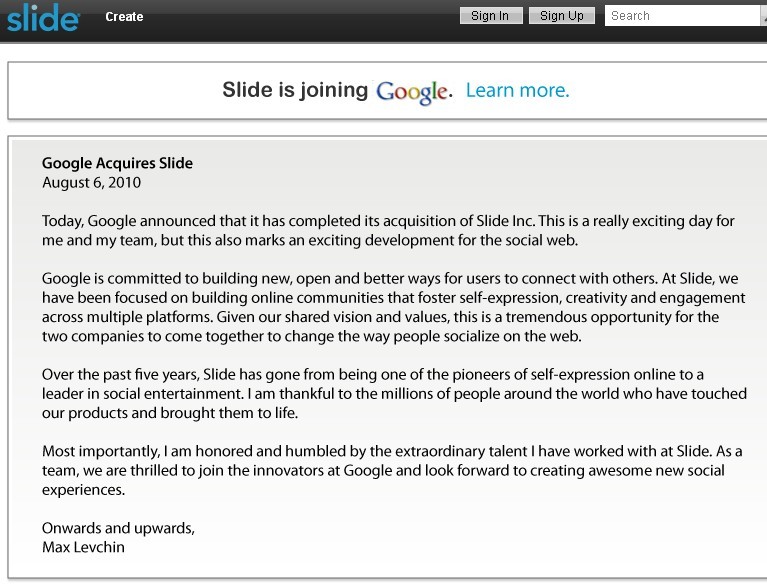 Why did Google buy social application developer Slide? A main line of speculation has been that the company wants to build a social gaming platform, and there are many reasons to assume that.

But we’re hearing that the search leader is focusing on creating general social products first, and it is still just at the start of doing that. Specifically, Slide founder Max Levchin will be personally responsible for leading the design and launch of a new social product, including some form of third-party platform around it.

Social games could become part of the plan later, and it’s easy to see why people are assuming that. They generate a substantial minority of Facebook’s site traffic and create substantial revenue in the form of virtual goods sales. Gaming companies, other social networks, widget developers and everyone else has been trying to get in on this action already, as scarcely a day seems to pass without another self-described “social gaming platform” launching.

For its part, Google has shown many signs that it wants to get in, too. Within the last several months it has reportedly bought a stake in social gaming market leader Zynga, acquired virtual goods payments service Jambool and small widget and game developer LabPixies, and has been hiring product managers to focus explicitly on games.

The problem, as many other would-be platforms have already been discovering, is that the “social” part of social gaming has to come first. Then, games can be developed on top that use people’s social identities and the communication channels around them. Facebook has been able to create a social gaming ecosystem because it already convinced users to establish real-world identities and make online connections representing real-world relationships, all based around easy-to-use sharing features.

Google, we’re told, understands what the order of operations needs to be here. It is trying to fill the “social” product hole that it has until now either ignored or deprioritized. Past efforts, from somewhat-popular social network Orkut to somewhat-used platform standard OpenSocial, have not contributed significantly to Google’s revenue, nor created disruptive alternatives to Facebook.

So what will this new social network thing look like? Google has not yet decided, and in fact the company has been busy sorting out the organizational structure around it. This was part of the reason that Google’s top executives decided to purchase Slide. But it was not just a talent acquisition.

Look more closely at Slide, along with the other social companies that Google has been buying, and you can see pieces of its plans coming together.
Slide’s History of Self-ExpressionSlide has not been the most successful social game developer; Zynga, along with Playfish, Playdom, CrowdStar, and others, all have much larger and more engaging games on Facebook. Instead, its first big success was with photo-editing slideshow widgets on MySpace, in the earlier part of the decade — before the social network had a developer platform. Even though MySpace didn’t want third parties using its service at the time, users wanted to decorate their photo albums with sparkles, neon colors, cute icons, and the other self-expression options that Slide offered. And Slide, in turn, developed its expertise in this area, figuring how to get viral growth from the widgets, and hosting millions of photos and other media. The company still makes 40% of its revenue on its MySpace widgets, from things like branded virtual goods in slideshows and other types of ads, we’ve heard from industry sources.

Following the launch of Facebook’s platform in May of 2007, Slide quickly used its expertise to amass millions of new users. At the time, Facebook’s interface was a natural fit. Third parties could let users install application boxes on their profiles. Slide, along with long-time widget competitor RockYou, basically ported over many of their leading MySpace widgets, and not just slideshows but other self-expression winners like Top Friends.

But Facebook founder Mark Zuckerberg and his product team decided that they wanted information-sharing, not so much self-expression. The company had already been going this direction with the launch of the news feed in late 2006, but in a series of platform policy changes over the course of 2007 and 2008, it went further. The biggest was that it hid then ultimately removed third-party boxes from user profiles.

It also refused to introduce a key component of MySpace widgets: the option to auto-play Flash. On MySpace, Slide and RockYou were able to have their highly visual, audio-powered content playing as soon as users load a page. Facebook understandably didn’t like this user experience, even though it had proven an effective way for developers to get users engaged. Here’s how RockYou chief executive Lance Tokuda described the issue to us, back in June of 2007.

The lack of auto-play with Flash almost kills the viral loop around friends visiting your profile. We’ve received a number of requests for this feature and we’re still hoping that Facebook will find an auto-play solution at some point. They are considering an opt-in solution. Without opt-in, I’m sure they would meet strong resistance from their loyal users. With opt-in, I think the experience might be positive by adding more engagement to their site.

Yet Facebook’s sharing focus has proved massively successful in the last few years, making the service becoming the default way for millions of people to consume information from around the web.

The news feed has also proven to work great for social game developers, who relentlessly have users sharing gaming activity to their friends.

Slide, RockYou, and other companies that had built their businesses around self-expression, struggled to adapt to the changing ecosystem. They developed social games, often via expanding on themes from their earlier successes and cross-promoting the new titles to their existing users. Some titles, like SuperPoke Pets, have gained decent traction. But not nearly as much as Zynga, Playfish, Playdom and the other social gaming market leaders of today — these companies made gaming the focus from the start, and grew significantly over the course of 2008 and 2009 as the platform shifted.

What Will Slide Do Now?

Many developers we know in the industry have considered Facebook’s platform changes and policy enforcement to be purely subjective, if not mercurial. That view is perhaps inevitable, considering that Facebook has constantly been redefining its core features, and figuring out how to deal with the ruthlessly self-absorbed developer community (these app developers have often been described as spammy, and in some cases scammy). Facebook itself has been working hard to move past the conflicts of the past, redoubling its efforts to provide developers with clarity around products and policies, as company chief technology officer Bret Taylor recently highlighted to us.

We believe that Levchin and his team will craft the rules of the platform to be extremely clear, in some places copying the best practices that Facebook’s platform has evolved to, and in other places making the platform work differently. Google has the incentive to play up any contrast it can to what Facebook has done — expect lots of spin around how it is more open and friendly to third parties than Facebook has been.

In sum, Slide has been through nearly a decade’s worth of social development, across a variety of platforms, and has dealt with severe platform changes. Now, Levchin and his team are getting the chance to pull all their lessons together and create what they believe to be the right platform. The terms of the Slide deal are instructive here as well. Dozens of employees got large retention bonuses, ranging from six to seven figures, specifically to retain their skills in building massive non-gaming social applications.

We would not be surprised to see Google Me (or whatever it is called) making self-expression a priority, complete with ways for users to do things like customize and auto-play slideshows on their profiles. And we also expect to see Levchin and his team to integrate the most social, self-expression focused parts of Google, like YouTube, Picasa (sort of), Blogger, Orkut and whatever else it can.

Slide is charged with going beyond the engineering and productivity-focused mindset of Google, creating a meaningful social alternative to Facebook — that does things users want, that Facebook can’t or won’t do. It might not work, but the combination of a veteran team and high-level prioritization means Google has the best shot yet at creating a meaningful alternative for users and developers.（source：inside social games）