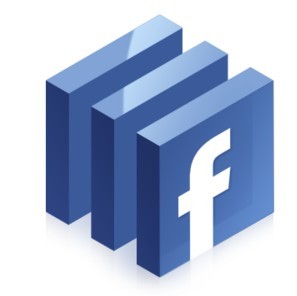 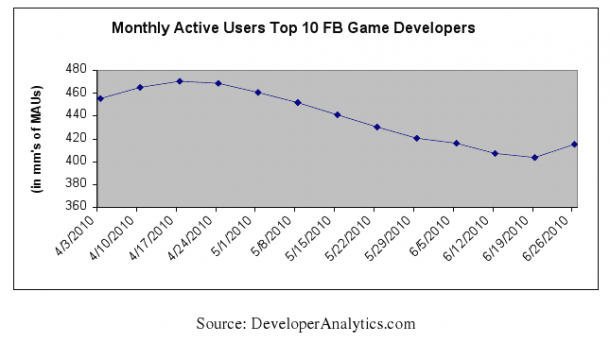 he negative impact on social gaming providers from Facebook’s changes in notifications and requests imposed in March finally seemed to have slowed in June, with total monthly active users (MAUs) of the top 10 game developers dropping by a little over 1% from May levels to 415mm in June, after falling 9% in May.

We were very interested to read Mark Zuckerberg’s thoughts on the changes in a recent interview on Inside Facebook where he said that:

There are two ways that apps get usage that really define the character of the application. One way is viral distribution – spreading to new people. The other is reengagement. Early on, the viral strength was so much, but there were really no channels for reengagement. So people were using viral channels to reengage people, and you basically had apps that were growing very quickly, and their best way to get a good user count was to get new users and churn through them. That really optimizes for apps that are very viral instead of apps that are high quality and that people want to reengage. So we intentionally weakened the viral channels recently, and intentionally strengthened reengagement with emails, so that there will be better apps. It’s going to be a long process, but I think it’s going reasonably well.

One of the things we did recently was re-balance around games. A lot of users like playing games, but a lot of users just hate games, and that made it a big challenge, because people who like playing games wanted to post updates about their farm or frontier or whatever to their stream. They want all their friends to see their updates, and they want to get all their friends’ updates, but people who don’t care about games want no updates. So we did some rebalancing so that if you aren’t a game player you’re getting less updates.

As a result of this “re-balancing,” since reaching their peak in mid-April, as the Facebook changes were being implemented, total MAUs have fallen over 14%, with virtually every developer seeing a significant fall off:

This large drop off comes amid the emergence of several new hits for the social gaming providers. Most notable, Zynga’s Treasure Island was the fastest growing game in the history of Facebook, reaching over 20 million MAUs in just three weeks. However, the entire lifecycle of games appears to be compressing, as Treasure Isle peaked just seven weeks after its introduction, and over the subsequentsix weeks, Treasure Island has lost over 20% of its MAUs, including a 2mm MAU loss just last week.

Treasure Island hasn’t been Zynga’s only new hit. More recent, Zynga introduced FrontierVille, which has already surpassed 11 million MAUs after just three weeks, but these new hits haven’t come close to offsetting the losses among all the other Zynga games:

it’s interesting to note that the game with the best staying power is Texas Hold’ Em, a classic poker game that was likely the easiest for Zynga to build, and is the most basic of all of Zynga’s games.

The social gaming providers are hopefully finally at the point where things will level off from the Facebook changes, such that growth can begin anew. We’ll keep you posted.