This week’s list of fastest-gaining Facebook games by daily active users is led off by My Empire, the new Electronic Arts  game that’s taking the city-building genre by storm. So far, it appears that My Empire has quite strong DAU gains in addition to MAU.

Also toward the top of the list we see MindJolt Games, the large game portal. Since it was acquired in March, MindJolt’s traffic first rose, then dipped; now it’s on the rise again. However, the numbers we’re seeing suggest that its current upward trajectory will hold at least into next week.

As others have noted, several Zynga games have lost significant numbers of monthly active users this month. However, that’s not the whole story, as you can see by looking at the stats from PetVille  and Café World, which both appear fairly high on the list. Both games have lost fairly large amounts of MAU over the month, but fewer DAU. PetVille’s DAU as a percentage of MAU chart, which shows what percentage of players come back on a daily basis, is fairly representative of the two: 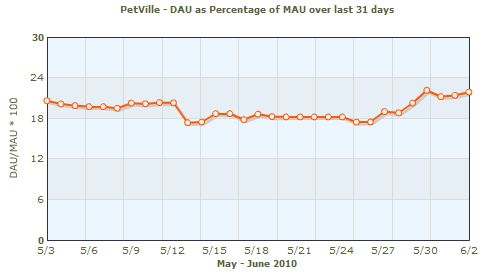 So although MAU for the games is falling, it appears that part of the trend is simply the least-engaged, and thus least valuable, players dropping out — at least for these two games, and for Texas HoldEm Poker, which appears right below Cafe World and is perhaps Zynga’s most reliable game. Overall, Zynga’s numbers are indeed falling, including DAU.

Also worth noting: Nightclub City and Mall World are both still making steady gains. However, Mall World’s MAU growth has slowed down significantly, while it’s still gaining a few DAU; Nightclub City, on the other hand, is still shooting ahead in both stats.