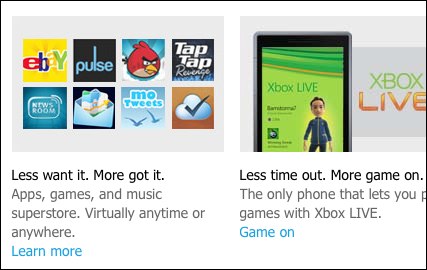 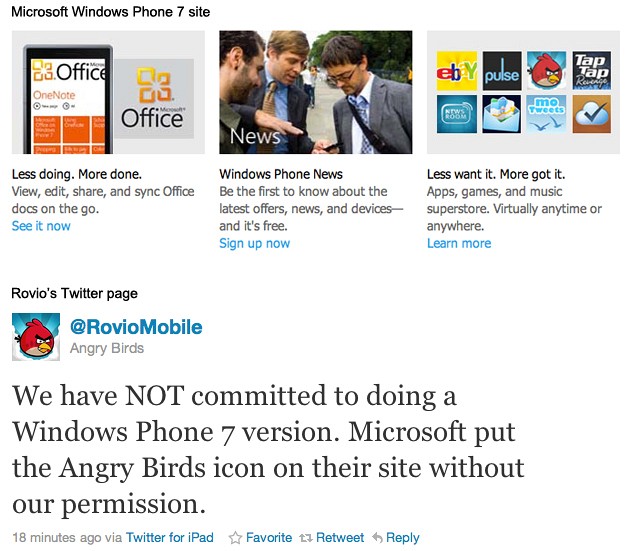 Oh oh, it looks like Microsoft has made a booboo and put Rovio’s extremely popular game, Angry Birds, on its Windows Phone 7 site. The problem is that Rovio didn’t actually give Microsoft

permission to use the Angry Birds icon and it isn’t even “committed” to making a Windows Phone 7 game. Ooops.

Update: According to Engadget, Microsoft sent TechFlash the following statement: “It appears information was mistakenly posted to Microsoft’s website, and has been removed.” The Angry Birds icon

The company caused a stir this morning when an icon for the popular mobile game was spotted in a remote corner of its Windows Phone site, hinting that it would be available for the company’s new

But Rovio Mobile, the maker of the game, quickly responded with a tweet: “We have NOT committed to doing a Windows Phone 7 version,” it said. “Microsoft put the Angry Birds icon on their site

In a follow-up tweet, the company noted that its response had “nothing to do with if we do or don’t, it’s just that we decide that ourselves.”

Apart from causing a minor dustup on Twitter, the status of the hit game is notable because Microsoft will need the support of major games and mobile apps companies as Windows Phone leads its

comeback bid in the mobile market.

I’ve contacted Microsoft for comment. The icon, visible in the screenshot below, was still live on the site as of 8:30 a.m. Pacific time.

Update, 9:35 a.m.: Here is Microsoft’s statement: “It appears information was mistakenly posted to Microsoft’s website, and has been removed. We have nothing new to share, but stay tuned for

announcements from Microsoft and its partners on Monday.” （source：techflash/recombu/engadget）