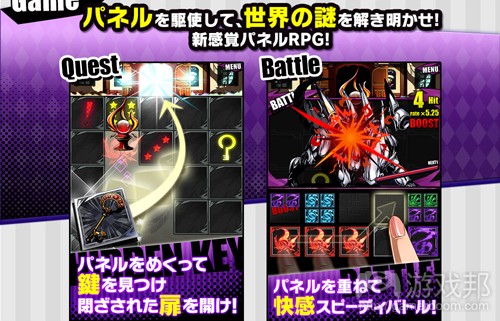 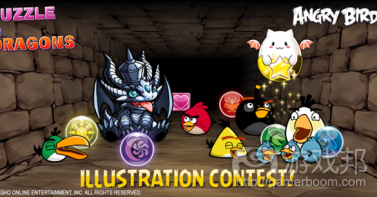 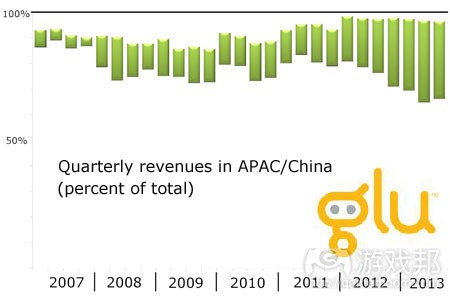 Is lightning about to strike twice?

The panel RPG has similar features to Puzzle & Dragons, such as quests, an evolving/leveling-up system, and end of stage boss battles.

1 million in a month

Even more impressive is the fact that Divine Gate only been available to download for just over a month.

It’s likely that GungHo will quietly be hoping that its newest title can build on this solid foundation, and go on to replicate the success of Puzzle & Dragons – a game that has over 20 million users in Japan.

The game’s success is especially timely, given it comes at a time when Puzzle & Dragons’ growth is slowing in its native Japan. Indeed, profits fallen at the developer in its most recent quarter, down 12 percent to $238 million.

For the time being Divine Gate is only available in Japan, however GungHo have confirmed that an international version is on its way.（source：pocketgamer）

2）Finnish friends: Rovio’s Angry Birds are teaming up with developer GungHo to appear in Puzzle & Dragons

The Angry Birds are coming in for a crash-landing in Puzzle & Dragons.

Starting on Nov. 18 and continuing through Dec. 1, Puzzle & Dragons players can challenge an Angry Birds-themed dungeon. This level will feature the familiar avian characters from the Angry Birds series as the enemies.

“Angry Birds is one of the most recognizable entertainment franchises in the world, and we are thrilled to be working alongside Rovio to give our fans a look at what it would be like if Angry Birds characters invaded the world of Puzzle & Dragons.”

In addition to the cross-over event, Rovio is holding an illustration contest starting today. The developer is inviting fans to submit drawings based on the theme of the Angry Birds showing up in Puzzle & Dragons. The contest will continue until Nov. 20, and fans can enter their work on the Angry Birds’ Facebook page.

“At Rovio we are very happy to bring Angry Birds together with Puzzle & Dragons, and to introduce the fun contest to both games’ fans all over the world,” Rovio vice president of games Jami Laes said in a statement. “It will be exciting to see what our creative fans will come up with.”

Rovio and GungHo Online are two of mobile gaming’s biggest studios. Rovio had early success with its Angry Birds titles, while GungHo is on the upswing with Puzzle & Dragons, which is on pace to make $1 billion per year.

Japanese gamers have downloaded Puzzle & Dragons more than 20 million times. That’s a huge portion of the population, but the title isn’t performing as well in the U.S. Picking up American gamers is likely the motivation behind this event. We’ve reached out to GungHo to ask if this is the case, and we’ll update this post with any new information.

This isn’t the first cross-over promotion GungHo has held with its RPG puzzler. The developer teamed up with Finnish studio SuperCell twice before to cross-promote Puzzle & Dragons with mobile strategy title Clash of Clans. Prior to the second event, GungHo partnered up with Japanese investor SoftBank to make a $1.5 billion investment in 51 percent of SuperCell.（source：venturebeat）

Notably this is higher than rival EA Mobile’s sales during the period, which were a disappointing $75 million.

Gameloft doesn’t break out its profit figures until later in the year.

The proportion of total sales due to smartphone and tablets continues to rise – now 69 percent of sales, compared to 58 percent in Q3 2012.

Free-to-play games accounted for 55 percent of Gameloft’s sales in Q3.

However, the company said that over 80 percent of its revenue during 2013 came from titles released during 2012 and earlier.

In terms of a regional breakdown, its largest market was North America with 32 percent of sales. Europe and the Middle East were 31 percent, Latin America 20 percent, and Asia 16 percent.

Plenty of western mobile games have been successful in China.

As with everywhere else in the world, Clash of Clans is currently riding high in the top grossing iOS charts.

Meanwhile titles such as Temple Run 2, Fruit Ninja and Plants vs. Zombies 2 are also star performers; a position they’ve gained as their developers are working closely with specialist Chinese publishers such as iDreamsky and Yodo1.

But there are some international companies – not just individual games – that are also doing the business.

One thing often forgotten about Glu Mobile is that it’s had an operation in China since its 2007 acquisition of MIG; a deal which at the time caused all manner of financial issues.

Now, however, looking at its recent financials, it’s clear how important the region is to the company’s future.

Starting in early 2012, the APAC/China region has been a key growth area for Glu, particularly as North America revenue have declined. It now accounts for around a third of revenues – much more than Europe.

It’s perhaps easier to see to this in the following graph, which breaks out the regions in terms of their percent of sales. (I’ve removed all the other regions for clarity.)

Of course, given the growth of the Korean, Japanese and Chinese mobile games markets over the past 18 months, perhaps this shouldn’t be a surprise.

But according to Glu’s CEO Niccolo de Masi, China is already the company’s second largest market after the US, and followed by Korea.

“Glu is the ‘foreign company’ that is big in China,” he says.（source：pocketgamer）

5）Nintendo opens up to mobile as giant posts meagre profit

Despite slow Wii U sales, Nintendo has announced a modest profit of ¥600 million (around $6.1 million) for the six months ending September 2013, up from a ¥28 million loss during the same period last year.

Sales at the company slipped, however, down 2.2 percent year on year to ¥196.6 billion ($2 billion), with Nintendo blaming its continued difficulties – in part – on its much maligned home console.

Indeed, the Japanese giant directly cited “advertising activities to increase sales, and research and development for the ‘Wii U’ software among others”.

Despite these less-than-stellar sales figures, however, Nintendo did not make any announcements to alter its hardware-focused business model despite the calls from analysts and investors to expand into the ever-growing mobile gaming market.

Yet as it turns out, Nintendo isn’t unilaterally opposed to mobile as a concept.

“We’re constantly thinking about how to leverage mobile as a marketing vehicle,” said Nintendo of America’s President Reggie Fils-Aime when discussing its strategies with CNET.

“How do I give little tastes of content, little experiences that then drive the consumer back to my hardware environment?”, Fils-Aime added.

These ‘little tastes’ won’t translates to full mobile ports of Mario Bros. any time soon, however.

“When the consumer wants to play Mario, Zelda, and Pokemon, they have to purchase our hardware to do so. And that preserves our overall financial model.”

And this model is key to bringing Nintendo deeper into the black during the next earnings calls, as it hasn’t altered its forecasted ¥100 billion ($1 billion) operating profit for the year with much of its faith riding on the global launch of Pokemon X and Y for the 3DS in October.（source：pocketgamer）

Only 16 percent of U.S. adults use Twitter, and only half of them get news via the short-message social network, according to a new survey by Pew Research Center. That’s far fewer than Facebook, where 30 percent of American adults get their news.

Still, with all that good news for a dream advertisers’ demographic, it’s hard to get around that one core glaring statistic: Only a small slice of American’s actually use the social media darling of the now.

This is not new news, of course.

77 percent of Twitter’s users are outside the United States, as we learned from its IPO documentation, and the company has massive penetration among the young, mobile-savvy populations of many developing nations. The only problem is that they bring in much less revenue than American, Canadian, and western European users.

The problem is that Twitter’s user growth has essentially stalled in the U.S. That’s something the company needs to fix, and quickly, as it goes public — and after.（source：venturebeat）