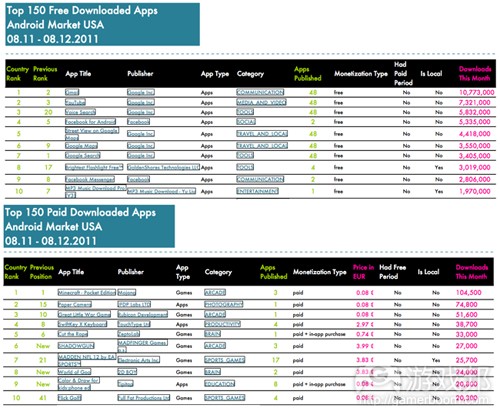 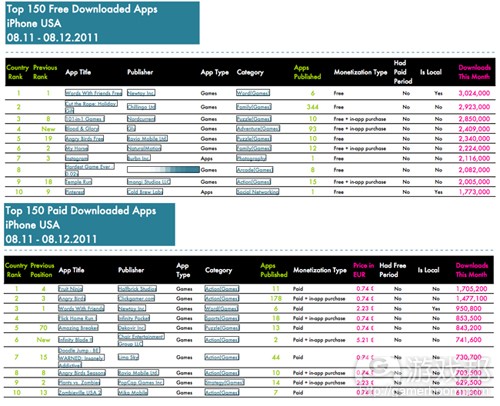 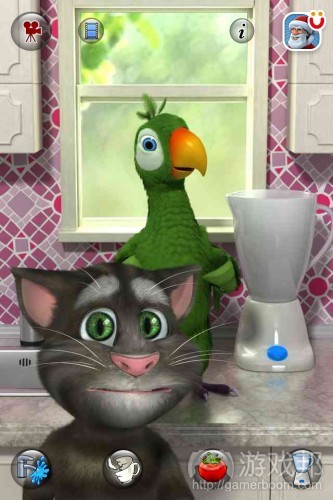 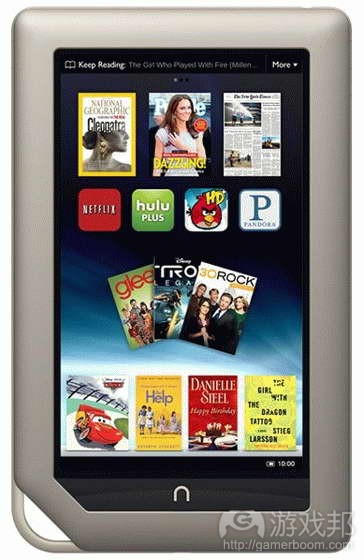 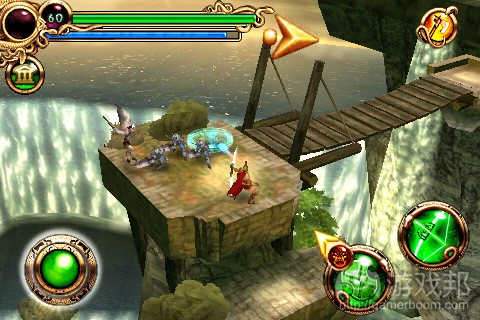 Hero of Sparta 2(from itunes.apple.com) 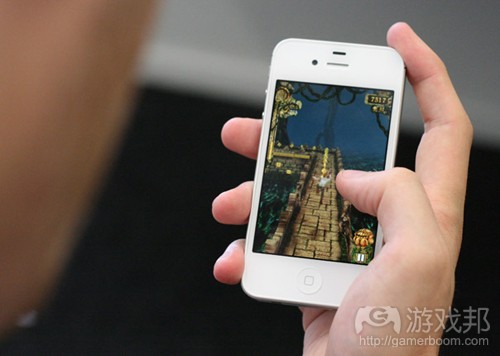 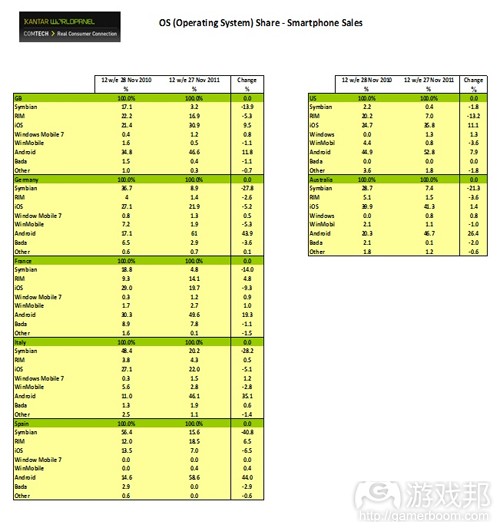 1）Android’s Popular Apps Lean Toward Utilities, While iOS is More About Games

Have an Android phone? You’re probably not much of a gamer, at least according to a new report from Xyologic.

As always, it’s interesting to note the disparity between iOS and Android on paid downloads. The top 10 paid apps on Android had 419,900 downloads between them — less than the 10th most downloaded iPhone game. These statistics help explain why iPhone revenues are consistently beating Android revenues by 4-to-1 for top grossing apps, an earnings gap we’ve reported on numerous times before.

Overall, games are increasing in popularity for Android at a faster rate than they are on iOS, which is in line with Android’s accelerating pace of adoption with 700,000 activations every day.（source:insidemobileapps）

Outfit7, which has built up an expansive empire of talking character apps, is ending the year with 270 million downloads and close to 80 million monthly active users.

It’s an unlikely success story given that the company was founded by a group of Slovenian search engineers and is formally headquartered in Cyprus. But it’s one that’s emblematic of the egalitarian nature of the Android and iOS platforms, where companies from countries like Finland and Slovenia can emerge as leading developers.

As for next year, the company plans to dive more into merchandising and the freemium model. The company recently signed a deal with brand licensing agency Beanstalk to bring out T-shirts, mugs and other paraphernalia to retail chains like Hot Topic.

Outfit7 started off the year with a mixture of paid apps and then free, advertising-supported ones. Then it started selling creative ways to interact with characters inside apps. For example, if users went for in-app purchases with Talking Ben the Dog, he would perform chemistry experiments which would sometimes blow up in his face.

Outfit7′s latest app is Talking Pierre the Parrot, who does cowboy dances and smashes teacups on the floor. Buying the upgrade in the app gets him to splash water around.

Even though Android is overtaking iOS in terms of active usage for companies like Facebook, Outfit7 says most of its business is still on iOS. This mirrors data we’re seeing suggesting that iOS is producing about four times the revenue that Android is able to support for top-grossing developers.

“The lion’s share of all our revenues this year have come from iOS,” said Paul Baldwin, the company’s chief marketing officer. ”But we expect 2012 to be a two horserace.”

The company has its products out on both Android Market and Amazon Appstore, where it’s seeing downloads in the five and six figures per day despite Amazon’s smaller base. “Both stores have become extremely viable for us over the last quarter,” Baldwin said.

The company has been through a couple of big changes this year. It hired a new chairman Narry Singh after the previous chief executive Andrej Nabergoj stepped down and went on to found his own company Iddiction. Nabergoj told us in the beginning of that year that smartphones were the new children’s toys and Outfit7 had the potential to become the next Hasbro or Mattel. He envisioned seeing as many as 500 million downloads by year-end. (But 270 million is definitely not shabby at all.)

Baldwin is still sticking to that original vision of being an entertainment brand and more than just an app developer. However, unlike Angry Birds-maker Rovio Mobile, Outfit7 is exercising a little more humility.

“I’ll leave the outlandish comments about going public on the Hong Kong stock exchange to Rovio,” Baldwin said. “Those guys have done a fantastic job, but their statements are about shock value, which I get a kick out of, if nothing else.”（source:insidemobileapps）

Hey, like Alec Baldwin said: “Words With Friends is for smart people.” (Or was that “Captain Steve Rogers?”) Zynga announced that its hit, cross-platform word puzzle social game, Words With Friends, has been released to Barnes & Nobles’s Nook Tablet. What kind of person buys the Nook Tablet? Someone who likes to read. And what is someone who likes to read? Smart. Boom … soul mates.

The game is available now in the app store on Barnes & Nobles’s brand new tablet-meets-eReader device. This is another attempt by Zynga to expand its stable of games to new platforms. The San Francisco-based developer released some eight mobile games this year alone. And what better match than a word game on a device specifically for folks that enjoy words?

And this launch couldn’t come at a better time, thanks to Mr. Baldwin. The 30 Rock star inadvertently (or did he?) endorsed the Scrabble knock-off by … getting thrown off of a plane while playing it. Zynga quickly capitalized on the ordeal, tweeting at Zynga, “LET ALEC PLAY” within an image of the game that spelled out the words.

And this is far from the end for the Nook Tablet when it comes to games. The eReader-tablet hybrid also has numerous games coming to its store, like Plants vs Zombies, Angry Birds, Scrabble, Rock’Em Sock’Em Robots, Doodle Jump Christmas and much more. But we all know what the smart people are going to play on the smart people’s device. Smarty pants.（source:games）

French publisher Gameloft has issued a formal apology to its fans over its clumsy switch of Hero of Sparta 2 into a freemium title.

The game has returned to its original paid format, having had the offending advertisements removed after fans cried foul.

“We are hearing lots of complaints from the fans of Hero of Sparta 2 on iPhone, after the game became free,” read a post on Gameloft’s Facebook page.

“We believe the gaming experience has been dampened in this new version. With the craziness of the Christmas period, this game update didn’t go through our usual quality process.”

Highlighting the seriousness of the situation, VP of worldwide publishing Gonzague de Vallois also took the opportunity to convey his regrets.

“Gameloft wishes to apologise to the fans of Hero of Sparta 2 given the poor gaming experience, brought by the free version,” he said.

“We acknowledged the advertisement included into the game deteriorated the gaming experience.

“We have now completely removed all ads from the game and switch [sic] it back to its previous status on the Appstore. Thank you for sharing your feedbacks [sic] and for being a Gameloft fan.”

Gameloft is currently heavily experimenting with new business models including subscriptions and free-to-play.

Another recent odd example have been the real world offers available i the free version of UNO on Android. （source:pocketgamer）

Apple could ship an unprecedented 30.3 million iPhone units during the final quarter of 2011, according to an analyst at Susquehanna Financial Group.

Susquehanna appears to be falling in line with UBS analyst Maynard Um’s prediction a few weeks ago that Apple would sell as many as 30 million iPhones by the end of December. Both Um and Susquehanna have now bumped their initial iPhone sales up by 2 million, based on super-strong web buzz and strong sales reports from carriers.

In terms of the full year projections, Susquehanna now is estimating Apple could ship as many as 111.4 million iPhones in fiscal year 2012 (which started in October), up from its previous estimate of 104.4 million units.

“Demand appears solid as iPhone 4S continues to ship in one to two weeks online and stores are generally sold out for in-store reservation and pickup (still hoping Santa has a few left),” Susquehanna analyst Jeffrey Fidacaro said in an investor’s note on Wednesday. “These factors, combined with positive color from Best Buy and AT&T, led us to increase our iPhone shipment forecast for North America and modestly for Western Europe and Asia Pacific.”

For future product predictions, Susquehanna indicated that Apple will likely unveil the touted iPhone 5 sometime around June. That said, I’d take that last estimate with a grain of salt because of how off projections were concerning the iPhone 4S launch.（source:venturebeat）

New data from Kantar Worldpanel ComTech showed yet again that the lukewarm reception for the iPhone 4S from the experts has not affected consumer demand one jot. Well, not in the UK.

iOS bagged market share from Symbian and RIM in the 12 weeks to the end of November 2011, and Android also increased its share – moving from 34.8 per cent to 44.6 per cent in a year.

O2, which had the original iPhone exclusive, still sells the most even now. It had 36.1 per cent of all iPhone sales in the past 12 weeks. 3UK is the  fastest growing network in the UK, with a smartphone share of 11.1 per cent.

Android has the biggest market share in all the major territories covered by the report, and is highest in Spain where it has 58.6 per cent of the smartphone market.

iOS was highest in Australia, just five points behind Android at 41.3 per cent.

Dominic Sunnebo, global consumer insight director at Kantar, said: “In Great Britain, the US and Australia, Apple’s new iPhone continues to fly off the shelf in the run up the Christmas, reversing the share losses seen during much of 2011。”However, this trend is far from universal, with sales in Germany and France somewhat underwhelming.  In fact, in Germany, Android achieved a dominant 61% share of smartphone sales in the latest 12 weeks, with the Samsung Galaxy S II the top selling handset.”（source:mobile-ent）