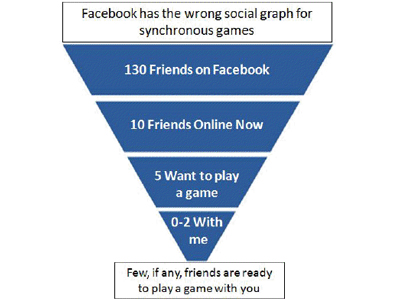 Facebook has the wrong social Graph for synchronous games

Only five of the top 100 Facebook applications are synchronous games – enabling users to interact in real time – and, of these, only one is in the Top 25 – Zynga Poker. Every week, it seems, a new “social” game comes out with yet another take on the same asynchronous mechanics that we’ve seen a hundred times before: whether it’s plow land, choose seeds to plant, wait for seeds to grow, sell vegetables in Farmville or clean the stove, choose a dish, wait for the meal to cook, serve customers in Café World, there’s a reason so many Facebook games play like different versions of the same game.

Because it works. Or does it?

Just about every Top 100 game has multiple Top 100 clones. From Farmville, Farmtown, and My Farm to Zoo World, Zoo Paradise, and Zoo Kingdom, every developer is copying the same mechanics, and sometimes the same game, over and over again.  What’s more, these games all optimize for the same two things: virality and monetization.  Or put another way: get 2 percent of your users to pay you and convince the other 98 percent to spam their friends in search of more “whales” to pay you. And while it’s a great trick, it’s also on the way out.

Facebook has shown only one trend with respect to its viral channels: choking them off.  Traffic has fallen in half at Farmville in the last year, as Daily Active Users (DAU) dropped from 32 million to 16 million according to Appdata.com.  Those users aren’t on new Zynga games either; they are gone. Overall Zynga DAU, across all of its applications, peaked at 70 million in February of this year. Since then, activity on Zynga games has declined 39% to 43 millions users. The last nail in the coffin for virality may have been Facebook’s recent move to suppress game feed stories from appearing in the feeds of non-players – effectively removing the News Feed as a viral channel.

If that weren’t bad enough, the other pillar of the social games growth engine – paid marketing – shows a less-than-favorable long-term trend too. In certain maturing Facebook markets, like the U.S., Facebook will soon have signed up everyone who could possibly want a Facebook account. As this happens, page view growth must flatten out, eliminating the dramatic increases in the supply of new advertising impressions each month. At the same time, demand for Facebook ads will only grow as advertisers are just beginning to reach this gigantic, data-rich audience, pushing advertising rates up and putting marketing-dependent social gaming strategies under water.

But of course Facebook knows this too. It knows its most popular games are not optimized for things that must be important to them – like time on site and human interaction. And for as much money as these games make, who would doubt that Facebook could find another way of making billions of dollars with its audience instead of continuing to nurture these asynchronous, asocial games?

Which is why if I had to bet on any trend in social gaming for the next 12 – 24 months, I would bet on synchronous games. The space is wide open and has a lot of favorable dynamics.

One of the more enduring trends is that humans are social – and they like to play games together. Whether it’s around a pool table, a basketball court, a monopoly board, or a card table, people like to meet each other and often form deep relationships out of the serendipity of gaming: whether it’s a random pairing in a pool tournament or a person who happens to be on the basketball court at the same time. And while we may not explicitly think of eight-ball, basketball, monopoly, and cards as synchronous games, that’s what they are.

Many in the industry don’t appreciate just how much users enjoy playing games online with people they don’t know in real life. Recent research from the Information Solutions Group’s study of Popcap gamers found that the #2 and #3 most popular groups of people to play social games with are not people they know in “real life,” but instead “online friends” and “online strangers.” What’s more, 76 percent of people prefer to play with others of around the same age. Why? Because the point of playing with people you don’t know is to make new friends, and people generally make friends around their age. The study also found that more than 70% of people made new online friends by playing games together.

But at the moment, at least, Facebook has the wrong social graph for synchronous games. Facebook users simply do not have enough friends to always find someone ready and waiting to play a game with them right now, and Facebook has not shown an interest in helping people to connect beyond their real-life social graph. The average Facebook user has 130 friends, only 5-10 of which are online at any given time, and only 2-3 of which are likely to want to play a game right now. When you consider how many of your friends want to play the game you want to play right now, with you, the answer is roughly 0. So it’s no surprise that only 1 of the top 25 Facebook games is synchronous today. The right social graph for synchronous games isn’t the people you know but the people you want to know.

The myYearbook social graph, on the other hand, is the people you want to know – people of a given age, gender, and location. With 25+ million members and 100,000+ online at a given time, our social graph is much wider, which means there are always people who want to play the same game as you at the same moment.

It was this difference in social graph that led us to the key insight behind our own gaming platform: that WHO you play is as important as WHAT you play. Our gaming platform, myYearbook Live, blends real-time video with social games. It’s a synchronous gaming platform to meet new people where the person you play against is as important — or more important — than the game itself, as you can see in the video below. Our goal is to create relationships through social game play. myYearbook Live is currently in a limited Beta and will be rolled out to a wider audience in January.

Of course, with 500 million users, no one can rule Facebook out of any market, but transforming a network founded on private sharing with friends and family into a place to meet new people through gaming would not be an easy task. The incumbent privacy questions and concerns would probably be the most significant Facebook has ever faced, not to mention that Facebook has shown it doesn’t want to clutter up its core asset, your social graph of real-life relationships, with people you happened to meet in the context of a game.

In the next 12-24 months, I expect to see dramatic innovation in synchronous games – both on and off Facebook. As social games stop being rewarded for exploiting viral channels and as CPI arbitrage evaporates in the face of increasing acquisition costs, games will become more interesting. They will be optimized for retention, for time spent, and for human interaction, and for the first time, the most popular social games will be the most social – not the most viral. （Source：businessinsider）