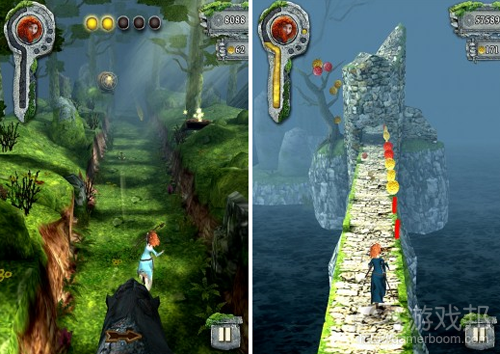 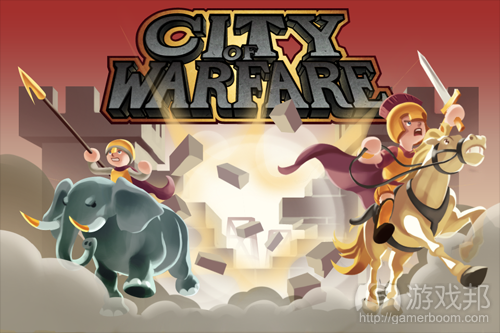 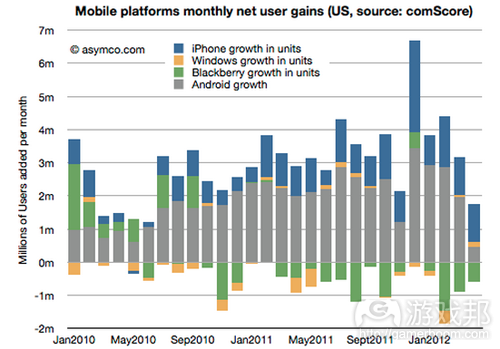 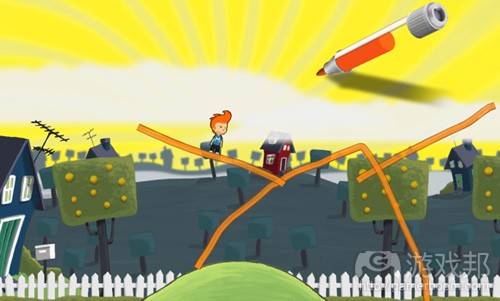 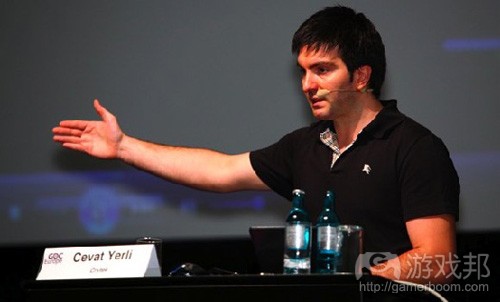 For the mobile game version of Pixar’s new movie Brave, Disney looked for help from the developers behind a big iOS hit — Imangi Studios, the creators of Temple Run.

Bart Decrem, the former Tapulous CEO who now runs Disney’s mobile division, says the company has already done its share of movie tie-in games on mobile, and they all followed a similar pattern — big downloads initially, followed by a rapid dropoff. His conclusion: “What we’ve done there hasn’t been big enough.”

Initially, Decrem says he wasn’t even planning to release a Brave game, because he didn’t want to do another mediocre movie tie-in, and there wasn’t enough time to do something better.

Meanwhile, he’d become interested in Temple Run’s success, and it was the Imangi team that was excited about combining Temple Run and Brave.

The Disney mobile team brought a group tech journalists to Pixar headquarters last week to show off the game (as well as 30 minutes of Brave the movie, which looks fun, gorgeous, and more Disney-like than any of Pixar’s past films). If you’ve played Temple Run, the game mechanics will be pretty familiar — you run through the forest, jumping, sliding, and dodging around obstacles, while also grabbing coins. However, the setting has been changed from an ancient temple to the Scottish forest, and instead of playing an explorer being chased by evil monkeys, you take control of Brave’s protagonist Merida as she flees from the “demon bear” Mordu. There’s also a new archery feature, where you can fire your bow at targets for extra points as you run.

After Decrem’s talk about not thinking big enough, a reskinned version of an existing game may seem like a bit of a letdown — and indeed, that’s how I felt when I watched the Temple Run: Brave demo projected on the big Pixar screen. However, it’s a proven and quite addictive game mechanic. (Temple Run was the #1 free iOS app for a while, and it currently has 16 million daily active users) And when I tried the game out for myself, I became so absorbed in running and jumping that I actually dropped the iPad. (Yes, I’m a klutz.)

A couple of the filmmakers behind Brave also stopped by the presentation and said they’d worked to make sure the game’s look matched the movie — for example, co-director Steve Purcell teased production designer Steve Pilcher for his need to add mist to everything. (Purcell who has a history with games, having worked on several of LucasArts’ classic adventure titles, including Sam & Max Hit The Road, based on his own comics.)

Temple Run: Brave will cost 99 cents — that’s more than Temple Run, which is free, but Imangi co-founder Keith Shepherd says they view this as a “premium version” of the game, not a replacement.（source:techcrunch）

The City of Warfare / City of Might saga has been ongoing since E3 2011, so imagine our surprise when a final version of Playdom’s City of Warfare launched on the iTunes App Store as a free download on both iPhone and iPad. While there’s no confirmation as to whether or not City of Warfare is actually a retooled version of City of Might, the game that looked to be heavily inspired by Zynga’s Empires & Allies, we’re still left to assume as much.

What we do know for a fact is that City of Warfare focuses on building a dominant military base, using the appropriate military-themed buildings (barracks, mess halls, brigs and the like), while also providing enough common base housing to raise your “city’s” population. When you first start the game, you’ll be given immunity for the first 48 hours; after that, it’s all out war, so you’ll need to build up as many defenses and upgrades as possible within the time frame.

If you’re familiar with City of Wonder on Facebook, you’ll immediately recognize the gameplay setup of City of Warfare. You’ll construct buildings, with some offering population units, while others create profits for you to build more items in a never-ending cycle. The sound effects have been ripped straight out of the former game, as has much of the user interface and artwork. With a focus on military might, the games do differ in this regard, as City of Warfare allows you to focus on upgrading your troops and munitions, making them both stronger in terms of offense and defense.

The Battle Map unlocks at Level 3, and gives you access to invading other players’ cities. You’ll choose how many of your troops you’d like to bring into battle, with each troop having its own attack and defense stats. Instead of actually allowing you to witness battles, you’ll simply hit the “attack” button and will then be presented with a results screen, displaying the individual match ups of troops that did battle, while also being allowed to choose to battle them again before eventually invading their city. If you can successfully invade a city, you’ll be able to collect taxes from that city as a way to show off your military prowess to other players and earn more coins for yourself in the process.

For everything good that can be said about City of Warfare, the game is incredibly slow moving due to the fact that you can only construct one building at a time. What could have been an incredibly fun experience turns into an equally limited one, as you’ll be forced to complete missions ridiculously slowly, since you can only work on one building and therefore one quest at a time, rather than setting a whole slew of items to construct at once while you go off and do other things (rather than being constantly tied to your iPhone or iPad). Of course, you can purchase Gold with real cash to solve this problem and instantly complete the construction of all buildings, but that shouldn’t have to be the only way to quickly get ahead.

For all of the good that can be said about City of Warfare, it’s definitely not a game packed with originality. While somewhat original in its “military might” theme, Playdom’s repeated use of the same “Legends” system, the same sound effects, interface, menus and more make this feel like a bland experience right out of the gate. Hopefully in time we’ll actually see something fresh out of this developer, that used to be at the top of its game.（source:games）

Android’s growth may be faltering as Apple and Microsoft see gains in their smartphone market share according to the latest report from comScore.

The metrics firm’s latest survey found Apple was the fastest growing OEM, increasing its share of the handset market to 14.4 percent, up 1.6 percent since January. Samsung was the only other OEM to see an increase in its market share, posting a 0.5 percent gain to account for 25.9 percent of all handsets. LG, Motorola and HTC saw their market share fall by -0.5, -0.7 and -0.4 percent, respectively. When isolated to just smartphones, Apple’s share of the market increased by 1.9 percent, accounting for 31.4 percent of all smartphone users.

As we’ve said before, 2012 is the make-or-break year for Windows Phone. Although the platform hasn’t yet emerged as a viable third smartphone platform, there have been some indications the company’s efforts are beginning to turn things around. Sales of the flagship Windows Phone, Nokia’s Lumia 900 have been reasonably good according to Barrons, and in April Distimo found that the Windows Phone 7 Marketplace was the fastest growing app store overall. We’ll continue to monitor the platform’s growth closely.

Meanwhile the picture was not as good for Google’s Android. The operating system posted the biggest increase in market share between January and April, seeing its portion of the smartphone market grow by 2.2 percent to account 50.8 percent of all mobile subscribers. However, the platform’s growth has slowed in recent months.  According to comScore records of the period between Nov. 2011 and Feb. 2012, Google was able to grow its share of total smartphone subscribers by 3.2 percent. As Asymco’s Horace Dediu points out, according to comScore’s data, this is the fourth month in a row that Android’s user growth has declined. It is now at its lowest point since 2009.

4）Rovio reveals even more new games in the pipeline

We already know that Rovio’s next game will be Amazing Alex, after the Angry Birds studio swooped for the relevant IP in May.

But it seems Rovio has even more new titles up its sleeve, with Ville Heijari, Rovio’s vice president of franchise development, telling CNN: “Oh yes, we have projects in the pipeline. But nothing we can announce just yet”.

“Still this year we will see more Rovio games,” Heijari continued. “I can’t really talk too much about them at this point.”

Angry Birds content has driven over a billion downloads, with Rovio reporting revenues of $106 million in 2011. But rather than gambling on new titles, the Finnish firm has so far concentrated on maximising earnings from Angry Birds via everything from fluffy toys and Angry Birds-branded clothing to a TV show and a theme park.

Rovio certainly has the resources to branch out into new content. From a nadir of 12 employees when Angry Birds entered development in 2009 – down from the 60 it employed before the bottom fell out of the Java games market – Heijari revealed there are now 350 people on the payroll.

He said the challenge of scaling up from a dozen developers to today’s entertainment powerhouse was another reason for the lack of new games.

“We have been hiring and building teams,” said Heijari. “We are building more efficient units to produce more games. We haven’t really wanted to rush the market or flood it with too many games.”

He said that the success of Angry Birds had enabled Rovio to reinvent itself.

“We do games, we do animations, we do our own merchandise, we work with licensers to create more merchandise, and we have sort of accomplished all these things ourselves. We already see ourselves as an entertainment company rather than a games studio.”（source:pocketgamer）

Microsoft has purchased Press Play, the Copenhagen-based independent developer behind Max & the Magic Marker. The company revealed the acquisition during a pre-E3 discussion on Spike TV, though terms for the deal were not disclosed.

6）Crytek boss says mobile is the future of gaming

It’s a long time since mobile gaming’s only supporters were wild-eyed bedroom coders and the besuited evangelists of the major handset manufacturers.

But it’s a sign of the times when even the boss of a triple-AAA PC and console games developer like Germany’s Crytek says mobile games are more central to gaming’s future than dedicated games hardware.

“The next generation of consoles will come under massive pressure from smartphones, tablets, and browser games,” Crytek’s CEO Cevat Yerli told Germany’s Golem website, arguing that the rise of these new formats made the old battle between PCs and consoles irrelevant.

“I suspect the next generation of consoles will be the last one,” he predicted.

Crytek made its name with PC titles so cutting-edge that gamers were best advised to buy a new computer to play them on, and Yerli concedes that market still exists.

“Of course there are still hardcore gamers who sit for an hour to install and then play for eight hours,” he said. “But these consumers are becoming the minority. Today’s gamers buy a game for 99 cents, download it and play it for 15 to 20 minutes per day over a period of two months – and then they move on.”

In addressing this fast-changing market, he said, console quality was no longer so critical, which made dedicated hardware too expensive compared to smartphones and tablets.

For the same reason he wasn’t very optimistic about Sony’s PS Vita console.

“The Playstation Vita is currently too uncertain for us as a platform,” he said. “Technically, I find Vita very appealing – to have fun with it, no question. From a business perspective it is a bit too late.”（source:pocketgamer）