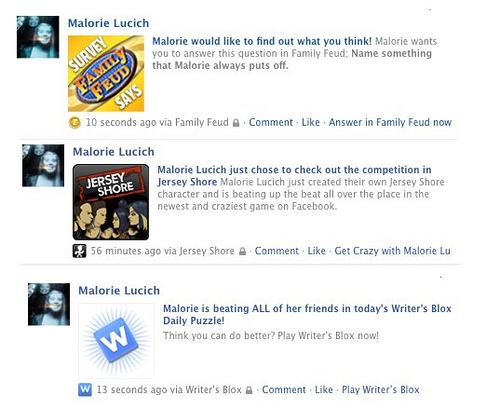 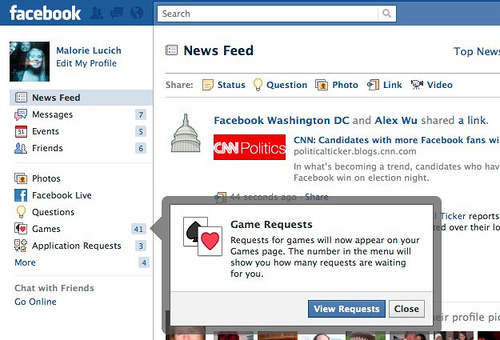 Facebook revealed a set of changes to its social games infrastructure at an event for game developers at the company headquarters on Tuesday night. Each change to the gaming infrastructure in the past has stirred up controversy, and this time was no different. But for all the trouble associated with games, Facebook clearly needs them. So the company continues its delicate dance between user experience and the business needs and wants of third-party developers.

The biggest change was to the channels by which developers acquire users. In the past, Facebook had cut down severely on the ‘viral’ channels available to developers, distribution channels like filling users’ news feeds with updates about their friends’ actions in the social games they are playing (of the “Timmy has just bought a cow” variety). Now, such updates will only be shown to other friends who are playing the same game as well.

Why the change? Facebook said it has seen a strong dichotomy on the network between non-gamers and gamers, who number more than 200 million. Opinions are heated on both sides.

While Facebook gamers will get to see all the actions and updates of friends playing the same game, non-gamers will only see a “discovery story.” This type of update will note that a friend has started playing a game, but not any of the specific in-game actions they take.

“Discovery stories are going to be an important part of the user acquisition/distribution channel,” says Facebook vice president of partnerships and platform marketing Dan Rose.

While Facebook is attempting to give back to game developers some of the ability of the past to easily acquire new users from the network’s huge user base, some developers I talked to were not happy with the changes. Only allowing existing game players to see their friends’ game-playing updates makes it tougher for developers to reach out to new users who don’t play their games.

“This was a traumatic change,” says Mark Otero, CEO and co-founder of developer KlickNation, noting the suddenness of the changes.

But Otero thinks that in general the changes are good for the network and for the user experience, and likes the re-engagement features. Which leads to:

Two big things here: smarter bookmarks and more prominent counts. Bookmarks, on the column to the left of the news feed, will be made “smarter” in that the apps that people most often use are automatically bookmarked in that space. The apps themselves won’t need to request their users to bookmark them now.

“Counts” — for instance, the number displaying how many messages are unread also in the left column — will be displayed more prominently for games, when users have outstanding invitations or tasks uncompleted. Instead of a gray number, the counts will now appear in a slightly more visible blue box next to each game.

Both of these changes are aimed at helping make apps more prominent and accessible to users. This was previously the mandate of the Games Dashboard that Facebook launched at the beginning of this year. Dashboard apparently isn’t cutting it yet. Says Jared Morgenstern, product manager for the company’s games team, “We think the Games Dashboard kind of sucks right now.”

Another major change was organizational. Facebook’s Morgenstern says he is now heading up games team for the company. The company declined to say how big the team was, but said that it drew members from various departments. In addition to working on the games infrastructure and features, the team will work closely with the Credits team. Credits is Facebook’s virtual currency, and a potentially large source of future revenue for the company.

Delivering a conciliatory message, Rose said, “We recognize some of the things in the past have led to reducing the distribution of games and having traffic go down, and that sent the signal that maybe we didn’t care about games.” But Rose pointed to the new Games Team saying, “There’s no better way to demonstrate commitment in this company than to assign engineering resources to this area.”

In contrast, Zuckerberg took the offensive, trying to steer the conversation away from concern about lack of viral channels to an implicit challenge to developers to create better games.

“Early on it was all virality, so much so that developers would use virality as a channel to re-engage people because [in-game] re-engagement was so weak,” Zuckerberg said. “Now games that are good, that are high quality that people want to use for a long time — people will want to stick with them.”

The running theme of the night was the duality of games and the difficult balancing act Facebook is playing. That games are so divisive on the social platform shouldn’t be a surprise, games were not part of Facebook’s original DNA. One mini-shocker Zuckerberg revealed at the event was that games are one of the biggest factors that negatively affect user engagement on the network.

But clearly, there are people who are addicted to Facebook games, as Farmville’s more than 60 million monthly active users can attest to. Not only do games help Facebook keep a large segment of its population coming back, they are also an increasingly important source of revenue. Farmville-maker Zynga for instance is estimated to make $600 million this year, mostly through sales of virtual goods. Facebook Credits is now being implemented on all the major developer’s games. Facebook takes a 30% cut of each transaction, which will eventually make games a significant revenue source for the company. In addition, games will help legitimize the Credits system, if many start using it. I speculated that this will be important to Facebook if it makes a play to become a payments provider on the Web for digital goods.

Expect Facebook to continue making changes to its games platform as it navigates these tricky, but important, waters.(source:forbes/netease)