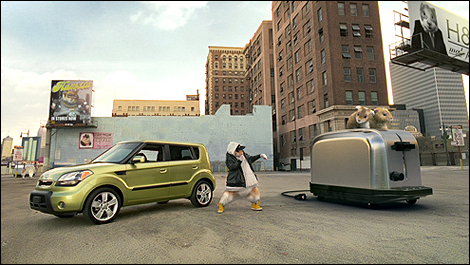 Solidifying its position in social media, Kia Motors America (KMA) is furthering its online presence by teaming up with marketing agency SocialVibe and the popular Facebook®-hosted game PetVille, created by leading online game provider Zynga. Building on the popularity of the beloved Kia Soul hamsters from the latest “This or That” ad campaign, PetVille users can become well-known mix masters themselves by creating “mash-ups” of the ad that can be shared with their online friends. KMA is the first automotive manufacturer to partner with Zynga and SocialVibe on such an application, which will run through the end of July.

“The immense popularity of the latest Kia Soul ad, especially with the Gen-Y crowd, made it an obvious fit for the popular PetVille game,” said Michael Sprague, vice president, marketing of KMA. “Soul already has been well-received on Facebook and in social media, and we felt that integrating with Zynga’s PetVille was the perfect platform to introduce the vehicle and the brand to new consumers in Soul’s target demographic, in a fun and engaging way.”

The interactive application, found at the bottom of the PetVille game page, invites users to click on an icon taken from the “This or That” spot to create their own Soul mash-up video. Upon entering the application, the Soul ad will start rolling and the user will be prompted to cut and mix their own cut of “This or That” by dragging five-second clips into a six-spot timeline. Once complete, they can playback their ad, which will play to the same theme music as the original spot. Members then will have the opportunity to post their work of art on their Facebook profile to share with their friends. In addition to creating their own Soul music video, participants also will receive PetVille cash in return for their interaction, which is typically only available through game play or by purchase.

“When partnering with brands for online games, we really want to advocate for the consumer to come up with something they would relate to and enjoy,” said Brennan Beyer, vice president, national sales of SocialVibe. “Facebook and PetVille have a specific consumer and we felt that the funky Kia Soul ad was really the perfect fit.”

The “This or That” campaign, the latest chapter of the Kia Soul hamster story, depicts the loveable creatures driving through city streets to the tune of the hip-hop song “The Choice is Yours” by The Black Sheep, cleverly comparing “This,” the funky and uniquely styled Soul, to “That,” a number of boring and mundane appliances on wheels, cardboard boxes or hamster wheels. The new spot debuted on cable at the end of May and can be seen in theaters and online.