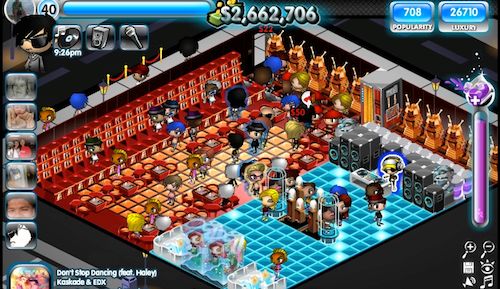 Booyah has made a series of changes to its hit Facebook game Nightclub City, with the overall goal of letting users play more and create a wider variety of virtual clubs.

The company is removing Energy, a game mechanic it added in late October that, similar to what you’ll see in games like FrontierVille and It Girl, made all activities cost either time or money. Once a player had used up their Energy for the day, they either had to buy more or wait to recoup their virtual strength. The game grew to a peak of more than 8.58 million monthly active users and 1.27 million daily actives by the middle of December, according to our AppData tracking service, but it has since fallen to 4.92 million MAU and 576,000 DAU. The decline happened before Energy was introduced, but the mechanic hasn’t helped boost traffic numbers.

As social gamers play longer and longer sessions, we’re interested to see if more developers cut back on energy-type limitations.

The other big change — and one that could send those numbers back up — is an expansion of the club concept. Up until this point, you could only have one main club in a given virtual city location. Now you can add an additional one. Each new club will start with a zero rating, and you’ll need to work your way up to five stars. But, with more locations you can through multiple parties at once, allowing you to make more virtual money more quickly.

Nightclub City has had a strong lineup of songs for its soundtrack since it launched in late April — to the degree that it’s also releasing a compilation album on iTunes today — but it’s also been adding bigger names in entertainment, too. Country star Keith Urban provided five tracks from his new album to go along with the game’s addition of a Western theme earlier this month, and in a move beyond music, the new Tron movie also has its own venue. Users can watch trailers for the movie, and the accompanying video game, and gain access to more items.

Booyah head of communications David Diaz tells us that promotions have already generated 2 million Likes on Facebook. Look for more big-name entertainers to come to the game in the first quarter of next year — as well as more products from the company.

We named Nightclub City the #1 new title of 2010, back in the middle of the year (we’ll be providing our year-end take on the industry later this month). The changes today appear to point the game in the right direction, and we’ll be watching for the results. （Source：Inside Social Games）