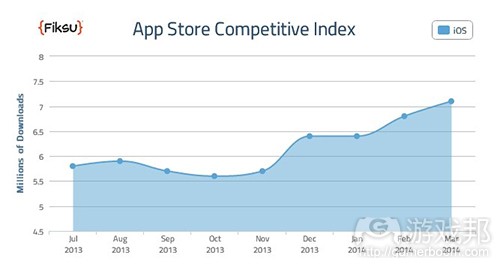 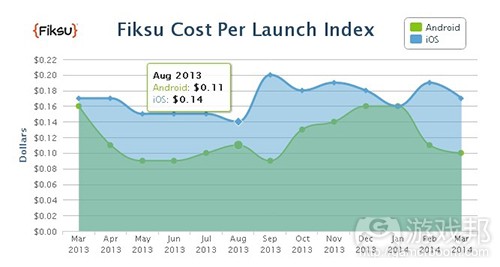 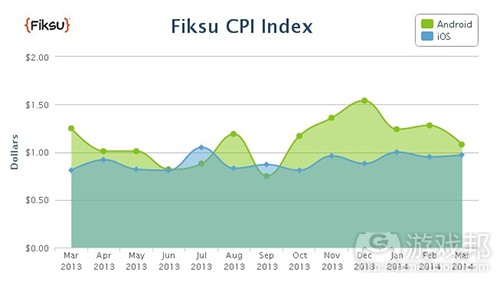 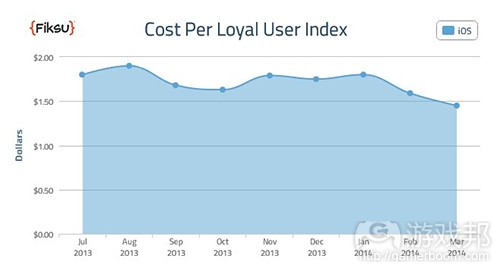 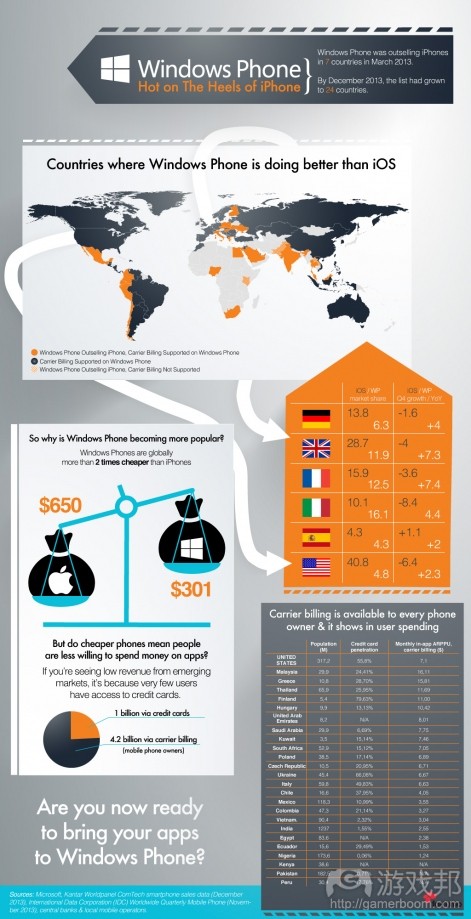 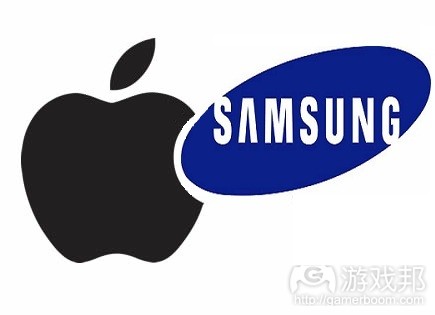 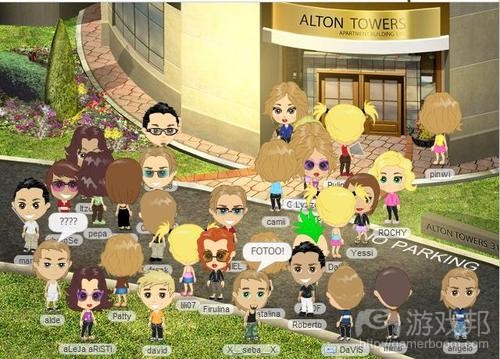 The number of downloads on the iOS App Store hit a record of 7.1 million daily downloads in March, up 41 percent from a year ago, according to mobile app marketer Fiksu.

The Fiksu data also shows that the cost of launching new apps on iOS dropped 10 percent from February to 17 cents, while Android dropped 5 percent to 10 cents.

Although traffic was high, marketers were able to keep spending in check through programmatic buying, the automated purchasing of mobile ads in a targeted way. The decrease in cost per app launch –  the cost of each repeat app launch over time, which focuses on engagement and life-time value of mobile users — is due not to the increase in devices in the market, but to the dramatic increase in app usage.

The Fiksu App Store Competitive Index measures the average aggregate daily download volume of the top 200 free U.S. iPhone apps. eMarketer believes that growth rates for both Android and iOS will be almost identical in 2014, so Android downloads are likely following the same path.

When app usage grows, there are more app launches and more time spent in the apps. At the same time, it is still challenging to attract loyal app users, those who open an app three times or more. The cost per install on iOS rose 20 percent in March from a year ago, while the cost per loyal user rose 7 percent. That means marketers are getting smarter about leveraging the right ad formats, ad creatives, and targeting tools so they reach the right users.

If it weren’t for those tactics, the cost per loyal user would have risen 20 percent.（source：venturebeat）

2）The 24 countries where Windows Phone is outselling iOS

It may be behind the targets some of the more optimistic analysts set for it when Microsoft first launched Windows Phone back in 2010, but at the end of last year, IDC revealed there are in fact a number of markets where the platform is outpeforming iOS.

24 in fact, ranging from the likes of Finland, Poland the the Czech Republic through to India, Mexico and South Africa.

Mobile payments specialist Fortumo has now detailed just where those markets are via the handy infographic below, along with the claim that Microsoft’s OS is gaining momentum thanks to its focus on cheaper handsets.

Even in markets where Windows Phone hasn’t toppled iOS, its performance is now nothing to be sniffed at. Fortumo pegs the platform’s UK market share at just under 12 percent, for instance, while in Italy its share of the pie is up to 16 percent.

In Microsoft’s home market of the US, however, the company faces a somewhat steeper climb, with iOS still accounting for 40.8 percent of the smartphone market to Windows Phone’s 4.8 percent.（source：pocketgamer）

What’s next in mobile? Find out at MobileBeat, VentureBeat’s 7th annual event on the future of mobile, on July 8-9 in San Francisco. Register now and save $400!

Samsung and Apple are losing ground in an increasingly competitive smartphone market.

While both companies – the world’s top smartphone vendors – shipped more smartphones in Q1 2014 than they did in Q1 2013, they aren’t growing as fast as the global market, according to new research from Strategy Analytics.

It’s not surprising to see Apple’s iPhones lose some market share to cheaper Android handsets. But even though Samsung’s market dip is smaller, it’s a worrying loss of momentum for the Galaxy phone maker — and a clear sign that offerings from competitors Lenovo and Huawei are becoming increasingly attractive to consumers.

Market leader Samsung shipped 89 million smartphones worldwide in Q1 2014 compared to 69.4 million in the same period last year, according to Strategy Analytics. Its global market share now stands at 31.2%, down from 32.4% a year earlier.

Strategy Analytics believes Apple needs to do more to cater to emerging markets. In other words, the iPhone 5C is not enough.

“Apple remains strong in the premium smartphone segment, but a lack of presence in the entry-level category continues to cost it lost volumes in fast-growing emerging markets such as Latin America,” the research firm noted.

Lenovo and Huawei shipped 13.3 million and 13.4 million smartphones respectively in Q1 2014, each capturing 4.7% of the global market.

If various governments approve Lenovo’s Motorola takeover, that joint company will prove an even greater threat to Apple and Samsung in the later half of the year, said Strategy Analytics.（source：venturebeat）

The mobile developer responsible for deer-hunting, robotic-policing, and eternal-warring is getting into the Diner Dash business.

Glu Mobile, which makes Deer Hunter, Robocop, and Eternity Warriors, announced that it has acquired Diner Dash developer PlayFirst for a $12 million all-stock deal. This brings the full lineup of Dash properties as well as PlayFirst’s development team under Glu’s control. This adds another popular brand to its stable of properties, which will help it continue its recent success that is largely driven by the big bucks its free-to-play Deer Hunter releases are making. The deal will also have Glu taking on approximately $3.5 million of PlayFirst’s debt, and it will likely close in May.

With over 750 million downloads across all of the Dash games over the last 10 years, Glu can build on the success of the franchise will also adapting it for today’s more lucrative business models.

“We believe the acquisition is an interesting opportunity, as Glu is buying intellectual property with historical value that didn’t make the transition to free-to-play but still could with Glu’s expertise,” Cowen & Company analyst Doug Creutz wrote in a note to investors.

That expertise includes bringing established brands like Deer Hunter to mobile and turning it into a massive free-to-play success. Creutz notes that the Deer Hunter acquisition “paid off handsomely” for Glu.

This move also represents Glu’s continuing efforts to move away from bigger, flashier games to brands that players respond to.

“It’s entirely about the power of the franchise and the teams behind them,” Glu chief executive Niccolo de Masi said.

Glu finished the first quarter of 2014 with a $133,000 profit, which is up from a $5.5 million loss in the same period of 2013. That’s with revenues of $47 million, which is the largest in Glu history. Now, with PlayFirst and Diner Dash in hand, the company is expecting even better result for the rest of the year.

For the full year, Glu is anticipating profits of $5 million to $6.7 million on revenues somewhere between $155 million and $161.5 million. That would represent a growth of 37 percent to 42 percent year over year.（source：venturebeat）

Long-running browser-based social game YoVille has been granted a stay of execution by Zynga, who announced an agreement today to transfer the game to Big Viking Games despite promising to shutter the project earlier this year.

The game will be rebranded YoWorld and transferred — complete with all user profiles and game history — to Big Viking Games by May 11th. Zynga is allowing players to withhold their account information from the transfer by filling out a form by May 9th.

It’s a homecoming of sorts — Big Viking Games is the studio previously known as Tall Tree Games, who launched YoVille in 2008 and sold the game to Zynga shortly thereafter.

By reassuming control of their game in the face of its impending demise, Big Viking seems to be adopting an approach similar to RockYou’s new “rerun” strategy of rescuing games that other publishers don’t want in the hope of continuing to operate and monetize them past their peak popularity. （source：gamasutra）