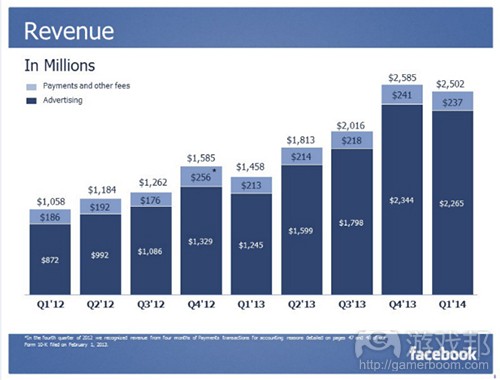 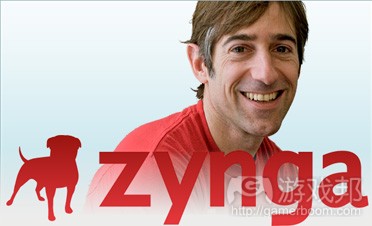 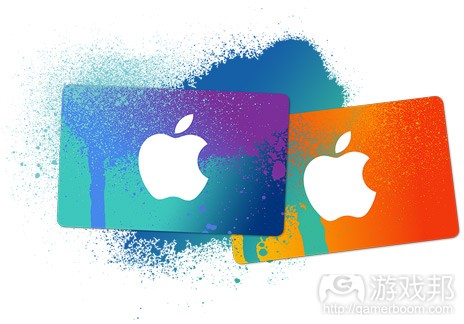 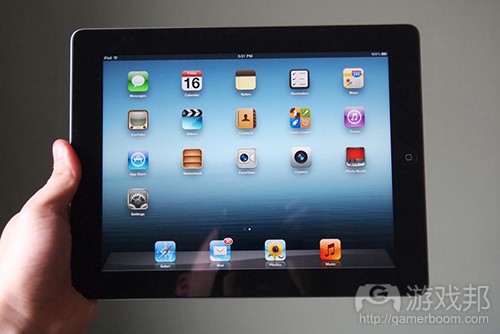 Facebook game revenue remained strong through the past quarter, the company said today, though it expects that further growth will be difficult as Facebook users move from accessing the service on desktop — where all game payment revenue is currently generated — to accessing it via mobile devices.

The company’s “total payment and other fees” revenue — which is made up largely of revenue from Facebook games — was $237 million for the first quarter of 2014, which ended on March 31.

That’s just over 10 percent more than the $213 million in payment revenue Facebook reported for the first quarter of last year, but most of that growth didn’t come from games.

That’s significantly less than the 8 percent year-over-year growth in revenue from games that Facebook reported at the end of 2013, and it suggests that growth in payment revenue from Facebook games will continue to slow going forward as more people access Facebook on their tablets and phones.

“The shift to mobile is a significant headwind, since our games payments revenue comes from desktop only, where usage is flattened or declining,” said Ebersman during today’s earnings call. “Growing this [games payment] business going forward will be challenging.”

Facebook continues to talk up its efforts to transition to mobile in order to adapt to a declining desktop user base, but most of that talk is focused on improving its advertising business, where Facebook makes the lion’s share of its money.

To that end, the company posted big numbers for the first quarter of 2014, with $1.08 billion in profits and revenue of $2.5 billion.（source：gamasutra）

Less than a year ago, an embattled Zynga named Don Mattrick as its CEO. Mattrick, an EA veteran, came from Microsoft, where he’d most recently headed up launch efforts for Xbox One.

Mattrick took over the Zynga role from company founder Mark Pincus, who’d been roundly criticized by investors, and soon announced a 90-day plan to reform the company. The 90 days may have elapsed, but those efforts are still ongoing.

Today, the company announced an even bigger change alongside its first quarter 2014 financial results: Pincus is stepping aside almost completely. He’s abandoning his chief product officer role and moving away from day-to-day operations for the company, though he will remain chairman of the board.

Further from that, Mattrick has appointed Microsoft colleague Alex Garden president of Zynga Studios. Garden was general manager for Xbox Live and Xbox Music, Video and Reading. Garden will now oversee all of Zynga’s game development studios. He’s also the co-founder of Relic Entertainment, and also had a stint as CEO of the North American division of Nexon — publishers of MMO MapleStory.

Revenues decreased accordingly: They were down 36 percent year-on-year to $168 million. Of note, its biggest games haven’t changed: FarmVille 2, Zynga Poker, and FarmVille are the number one, two, and three earners, as they were a year ago.

This — alongside a hefty restructuring charge of $30 million as the company reshapes the way it does business, including jettisoning some data centers — led to a net loss of $61 million for the first quarter of 2014.（source：gamasutra）

Apple has nearly 800 million iTunes accounts, Cook said during today’s quarterly earnings call. Apple customers spent $5.2 billion on iTunes purchases last quarter, 24 percent more than the same period a year ago. That’s also a significant jump from the $4.7 billion that Apple customers shelled out on apps, music, and movies the prior quarter.

The Cupertino, Calif.-based tech giant now measures 70 billion cumulative app downloads from its App Store, up from 65 billion in January.

Apple has more than 400 million credit cards on file just from iTunes, a Morgan Stanley executive told VentureBeat last week. This an important asset for Apple, as rumors suggest that it may be working on a mobile payment system.

Apple had a strong second quarter, beating analysts’ expectations. Apple reported $10.2 billion in profit on revenues of $45.6 billion for that period. These results compare to net profit of $9.5 billion on revenue of $43.6 billion from the same quarter last year. Get the full story here.（source：venturebeat）

The iPad’s sales are still declining, but Apple’s tablet may not be in as much trouble as some may think.

In its earnings report today, Apple revealed that it sold 16.35 million iPads during the second quarter. Analysts, meanwhile, expected sales between 19.2 million and 19.7 million devices.

Due to an inventory discrepancy, Apple claims its overall decline in sales to customers was only down around 3 percent from last year, when it sold 19.5 million iPads.

Apple’s corporate controller, Luca Maestri, explained during the earnings call today that the company pushed around 18 million iPads to retail last year (which means it sold off over a million iPads from stock it had previously). For this past quarter, Apple pushed 17.5 million to retail, but it only sold 16.35 million (which left 1.1 million in unsold inventory).

But without taking these inventory issues into account, iPad sales appear to have fallen around 16 percent. That’s the number most investors and analysts will point to when they predict doom for the iPad.

However you count the iPad’s decline, it’s easy to see that things are slowing down for Apple’s beloved tablet. And it seems even Apple CEO Tim Cook is aware of that — though he appears to attribute the decline more to the iPad’s fast adoption.

“iPad has absolutely been the fastest growing product in Apple’s history,” Cook said during the earnings call today. “It’s been the only product that we’ve ever made that was instantly a hit in three of our key markets — from consumers to business, including the enterprise, and education. … If you really look at it, in just four years since we launched the very first iPad we’ve sold more than 210 million, which was more than what we thought was possible in that period of time.”

Cook pointed out that Apple sold more than twice as many iPads than iPhones during the same period of time, and iPad sales were also seven-times greater than iPod sales during its first four years.（source：venturebeat）

Newsbrief: As the number of Russian developers adopting the Unity Engine grows, Unity Technologies is looking to better support these devs. The company announced today that it has opened a new office in Moscow.

Unity says that it has seen “a dramatic increase in the number of developers and publishers using Unity in Russia,” and as such, this new office will look to boost the Russian games industry as a whole.

The first decision in a monetization strategy starts with understanding which types of games are popular in which regions. For example, Chinese and Korean gamers are far more likely to prefer RPG/adventure games while Americans prefer puzzle games. Developers must then consider how their demographic discovers games.

Americans, Chinese, and Koreans all prefer to download free apps, but how they discover apps differs widely. Developers must also consider how their desired demographic views and makes in-app purchases. Attitudes towards mobile purchases and the reasons users make these purchases are very different, and developers should create purchase experiences that appeal to the specific region they’re marketing. Developers should then utilize in-app advertising to increase revenue and monetize from players who are resistant to paying for downloads or making in-app purchases.

Let’s take a look at how each region downloads and discovers apps.

App discovery mechanisms vary by country. In the United States, browsing app stores and following word of mouth recommendations are the two most popular methods of app discovery. Although there are a few emerging app stores, such as Amazon and Window’s Phone stores, Apple’s iOS App Store and Google’s Play Store dominate the United States download market.

China suffers from a very fragmented app distribution ecosystem. Although there are several sites that allow for the pirating of iOS games, similar to the U.S., China’s iOS store is still the primary store to download iOS apps in China. Our gaming study shows that two-thirds of Chinese iOS gamers discover apps by browsing the app stores. However, unlike the U.S., where Google Play monopolizes Android game downloads, China has an incredibly fragmented Android game distribution, with more than 500 competing app stores. According to our study, only one-third of Chinese Android gamers discover apps through app stores, and instead rely just as heavily on mobile apps and websites for reviews and recommendations.

Game distribution is more fragmented in Korea than in the U.S., but less so than in China. Android games reign supreme in Korea – Samsung and LG dominate the smartphone market, making iOS relatively obsolete. In fact, Korea generates the most revenue in the Google Play Store, second only to Japan12. Despite this, Google Play does not have a monopoly on the Korean Android app market. Smartphone companies, such as Samsung and local carriers like SK Telecom, also create and curate their own app stores.

More interestingly, many Koreans discover games through Kakao’s game platform. Kakao began as a mobile chat application that allowed users to make free calls or send free messages to other users. The chat application accrued more than 100 million users, and the company leveraged its application’s massive social network to create a mobile gaming platform. Using Kakao’s platform, players are able to invite their friends to download games, play games with their friends, and make in-app purchases, among other capabilities. Kakao’s business model has proven so successful that as of this publication, 9 of the top 10 grossing games on both Google Play and Apple Appstore games in Korea are games made for the Kakao platform9.