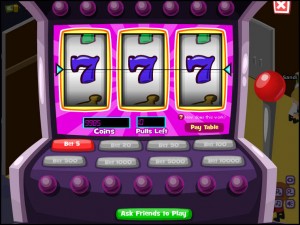 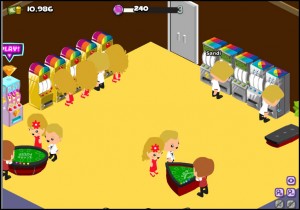 The business simulation genre on Facebook already includes farms, zoos, cities, restaurants and hospitals. But we’ve begun to see a new sect of business-based titles on the social network: the ever profitable (except in a bad recession) and extraordinarily glitzy casino business.

And social developer RockYou has its interpretation of the Las Vegas high life with its Facebook game, My Casino.

For the record, however, this isn’t the first casino game we’ve seen. Another one is DNA Games’ Casino City, a title we plan to look at more closely, as well.

My Casino has a simple enough premise: Build a beautiful casino full of various games to earn (virtual) money, and in turn, build an even bigger casino.

The app is simple enough to play. Players start with half a dozen slot machines and a Pai Gow table as guests begin filing in to lose… ahem… win some money. As the various games get played, their coin capacity fills up and the player must check back periodically to empty them so that more income can be earned. It’s pretty low at first, but thankfully, every game can be upgraded to hold more money. Of course, performing an upgrade not only comes with a price tag, but it also appears to lock the machine from being played until completed and the player manually reopens it by cutting a ribbon. Expectantly, the larger the upgrade, the more expensive the cost, and the longer it takes to complete.

Luckily, there are a few things one can to do while waiting. The quickest distraction is to play a little slots yourself. Each user actually has a slot machine that they can play 10 times a day — at first glance that seems like a lot, but remember, it’s just slots. Using your casino earnings, users bet a small amount, with larger bets unlocking as one levels up, in the hopes of a lucky return. Just like in real gambling though, the slot machine is less than generous on the payout.

What’s pretty cool about this feature, though, is that you can not only play 10 more times at each of your friends’ casinos, but as they play yours, you actually earn a little coin from them.

Furthermore, in order to upgrade it, it has to be played X amount of times by you and your friends, with the max level machine requiring 5000 plays. This, in turn, not only increases how much moneyit can hold, but even increases the number of times it can be played each day, up to 20.

Users can also gift special items – beyond just decorative elements – that can provide added bonuses to each other. One in particular is called Star Dust, that will instantly fill a game’s money bag to full; something rather useful at high levels with heavily upgraded machines. It is also worth mentioning, that the more gifts you receive, the more special items you can redeem. For example, 100 gifts received can earn you an animated, golden gryphon statue.

On another note, as players get more friends to join, they can also visit one another’s virtual spaces, help resolve random issues such as too much trash (though doing so is just a click on a button that basically says “help out”) to earn extra income, and even search their machines for a hidden treasure; a la Zoo World.

Decoratively, My Casino is a bit drab. The only point to doing so is to appease one’s own palette and other than the actually games, nothing affects anything. At least in other games, such as Nightclub City, décor would improve how luxurious your club was and by extension, how much non-player characters spent on tips and cover fees.

Beyond a point to decoration, the art style is going to be very hit or miss. Essentially, it’s the same style as RockYou’s popular Zoo World app, but because those characters were tiny (as the game was zoomed way out), they looked fine. Here, they are normal size with this sort of pasted, marionette grin, two total outfits, and two animations. When there are about 20 that all look and move identically, it looks almost creepy.

To make matters worse, the decorum itself is bland too. Everything is a mere paper cutout with no flare or style. It’s a casino! There should be lights, glitz, glamour, yet save for a handful of items, there is nothing of the sort, yet.

The tutorial NPC looks great and, though flat and 2D, makes for a much better character design, and the user-playable slot machine blinks and moves constantly. They are actually interesting to look at.

At its core, My Casino is a decently made game. It certainly makes for a new an interesting concept in a sea of imitators, and that — combined with RockYou’s cross-promotion and ad muscle — has been enough to earn the title nearly 660,000 monthly active users so far。