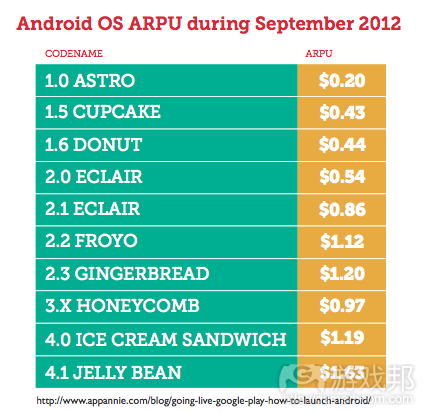 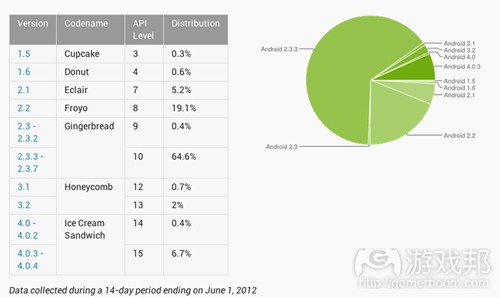 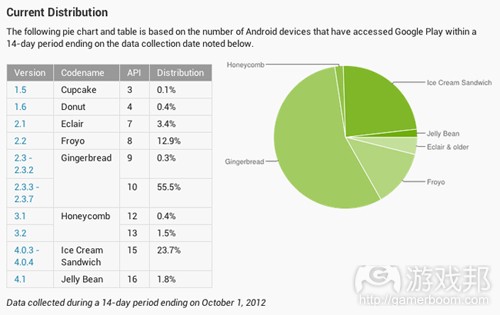 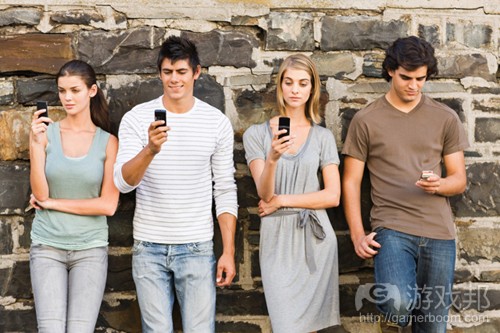 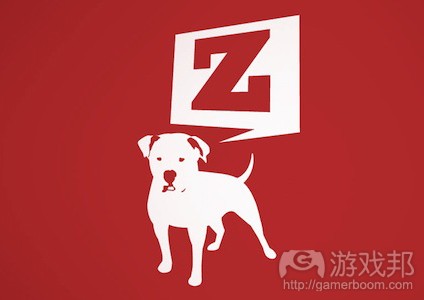 Every time Google releases a new version of Android, the platform’s monetization rates improve, reports Tapjoy. According to the company’s latest insights report, the Jelly Bean version of the Android operating system generates $1.63 in average revenue per user (ARPU).

During the month of September, Tapjoy analyzed Android conversion and monetization rates, and found that with the exception of the tablet specific Honeycomb OS, every new version of the Android operating system generated higher ARPU than its predecessor.

The findings are good news for Android developers, but they also underscore how Android’s fragmentation issues are holding back the monetization potential of the platform.

While Gingerbread may be the most popular version of the Android OS according to Google’s developer dashboard, those users only generate $1.20 in ARPU — 35 percent lower than the $1.63 generated by the 1.8 percent of Android users running Jelly Bean devices.

In June, Google introduced an Android Platform Developers Kit (PDK) in order to address fragmentation issues on the platform by letting OEMs have earlier access to new versions of the Android OS, starting with Jelly Bean. While the move doesn’t seem to have done much to improve new OS adoption speed, the number of users running older versions of Android has has dropped significantly since the summer.

Android platform distribution as it looked on June 1, 2012.

Today’s news means that while Android is still fragmented, the older, lower monetizing versions of the OS are seeing their market share decline fairly quickly — a factor that helps explain the significant increases developers have seen in their Google Play revenues and conversions.（source：insidemobileapps）

Facebook answered the big question of whether it’s transitioning to become a mobile ad company by noting in today’s earnings report that 14% of total ad revenue from Q3 2012 came from mobile — about $150 million.

The older Sponsored Stories and newer non-social app install and Page ads appear to be gaining traction with advertisers. That number will need to grow significantly in future to keep up with the user shift, as mobile monthlies increased 61% year-over-year to 604 million.

Here’s the full audio of the earnings call with Mark Zuckerberg and Sheryl Sandberg:

Total ad revenue was up 6.7% quarter over quarter and 32% year over year. That’s pretty modest recent growth. Considering Facebook wasn’t even showing ads on mobile until the end of February, the total increase from ads on the small screen could have been stronger.（source：techcrunch）

New data from eMarketer says consumers in the US are reducing the time spent web browsing via laptops, desktops and connected TVs, which is leading to a spike of mobile entertainment consumption.

The average American is now using their mobile for around 82 minutes a day to browse the web, use apps, listen to music, games and so on, a 51.9 per cent rise from 34 minutes a day in 2010.

That said, traditional non-mobile browsing will still grow this year, but by just 3.6 per cent to 173 minutes a day in comparison to the 7.7 per cent growth in 2011 to 167 minutes per day.（source：mobile-ent）

Zynga’s mobile gaming business is growing fast and now accounts for 20 percent of its bookings, according to company chief executive Mark Pincus (pictured above) while speaking on a conference call with analysts. Zynga’s stock is rising in after-hours trading thanks to a stock-buyback program and beating analysts’ reduced expectations for the third quarter.

That’s a much larger proportion than in the past, though it is down from the previous quarter because of the rapid decline of Draw Something, the Pictionary-style game that Zynga bought with the $180 million-plus purchase of OMGPOP in the spring. Zynga took a write-off of $95 million related to that acquisition, as the value of OMGPOP has declined to a level beyond what Zynga paid for it.

Despite the big disappointment with the OMGPOP acquisition, Pincus said the social-gaming giant’s fast-growing momentum on mobile is encouraging. Zynga now has the No. 4 mobile gaming network in the U.S., and it has three of the top five mobile games. He said Zynga reaches 30 percent of mobile users, and its players play 10 billion minutes a month of mobile games. At the same time, mobile is a challenge for Zynga because it is a fragmented market and distribution is more limited than on the web.

Zynga expects to launch two web games a quarter and four mobile games a quarter for the foreseeable outlook. Pincus also said that FarmVille and ChefVille are doing well on the web and on Facebook. FarmVille 2 has 61 million monthly active users, including 500,000 who are buying goods in the game for real money. In a single day, players recently spent $950,000 in the game. FarmVille 2 grew to 17 million installations in its first 21 days.

“We had a major breakthrough with FarmVille 2,” he said. “We showed we could bring a major 3D game” to the market. CityVille 2 is also coming soon.

Pincus said the recent acquisition of A Bit Lucky will lead to the company’s entry into the mid-core gaming market — which is in between hardcore console games and casual games — early next year. This could help Zynga reach more traditional hardcore gamers, who spend more money than casual gamers.

Zynga has started bringing more third-party games such as Horn to its mobile network as well as other games to the web-based network. The idea is to reach more genres and more game types faster by leveraging the talent of third-party game developers. Pincus said in the next year that the company will “continue to turn the network conversion on mobile.（source：venturebeat）

Mobile app marketers can enable iOS app download tracking by creating a single code snippet in their AdWords account and then implementing it into their apps.  With the code enabled, every time a user clicks on an in-app display ad that directs them to the iTunes App Store and chooses to download the apps, the download will register within the marketer’s AdWords dashboard. Note that downloads can only be tracked from in-app ads, not Google Search or Google Display network ads.（source：insidemobileapps）