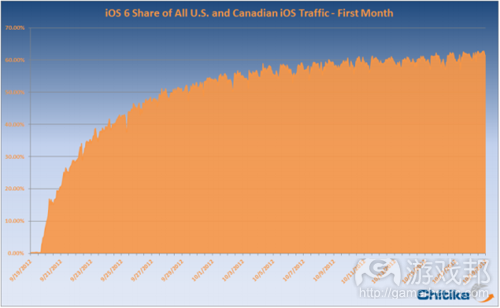 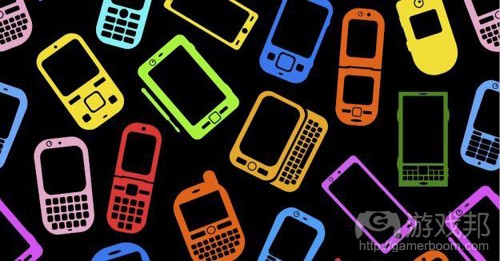 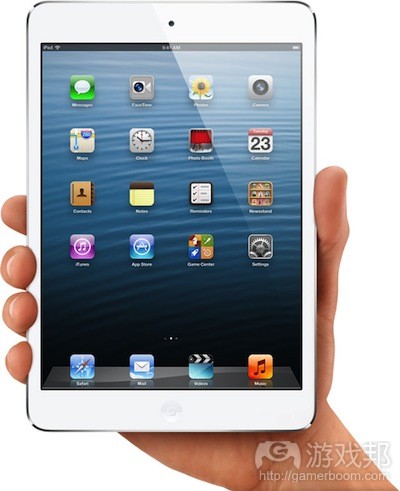 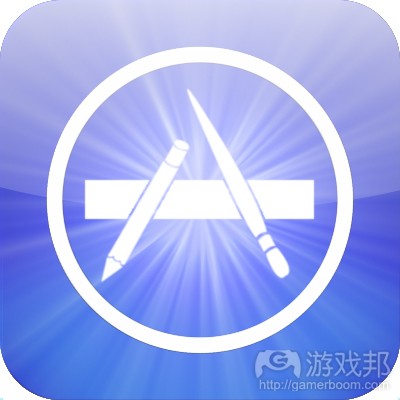 A month after Apple’s official release of iOS 6, it’s been installed on roughly 61 percent of possible devices in the U.S. and Canada according to new data collected by Chitika Insights.

That is only slightly better than the 50-percent adoption rate that iOS 6 hit after just two weeks in the wild, suggesting that users installing or upgrading to iOS 6 is slowing somewhat.

But still, it’s the fastest uptake of any mobile operating system upgrade.

Chitika regularly checks in on Apple’s mobile OS adoption by checking how many devices using iOS 6 have accessed its vast online ad network.

By comparison, just about a quarter of Android users had upgraded to the latest version of the software as of the beginning of October, roughly 12 months after its release.

While iOS 6 adoption growth has plateaued somewhat in the last week, don’t expect that number to remain stagnant very much longer. Apple is expected to introduce a smaller iPad on Tuesday and potentially a new 9.7-inch iPad as well, both of which could have a significant effect on iOS 6 usage.（source：gigaom）

Once you subtract all of the M2M connections and factor out all of the people who don’t own mobile devices, the number of devices owned by the typical U.S. wireless user comes to one-and-a-half per person.

How many mobile devices do you own? According to Wireless Intelligence, the research arm of the GSM Association, the number is 1.57 if you’re an average American subscriber. It’s even higher in the rest of the world, coming out to 1.85 mobile connections per subscriber.

If those numbers seem kind of high, it’s because Wireless Intelligence has done a bit more digging into the numbers. Instead of merely dividing the total number of mobile connections by a country’s population, it’s focusing exclusively on mobile device users – infants, Luddites and other non-phone owners don’t factor into the final figures. In addition, WI is eliminating the machine-to-machine (M2M) communications from its count. So what’s left are 225 million unique U.S. subscribers (71 percent of a the U.S. population) that own a combined 354 million mobile devices.

A lot of the 1.57 can be chalked up to people owning separate phones for work and personal use, but according to WI Senior Analyst Joss Gillet, connected tablets and laptops, and 4G modems are starting to make big contributions as well. New shared data plans from AT&T and Verizon will only spur multiple-device adoption.

Globally, overall penetration levels are lower – only 45 percent of the world population owns a mobile device – but on average those customers tend to have more than one connection. This can be explained in part by the growing popularity of dual-SIM card devices in developing markets.（source：gigaom）

3）Apple takes aim at Android and the Nexus 7 with the new, developer approved iPad Mini

As was widely anticipated, Apple unveiled the iPad Mini today, a smaller, 7.9 inch version of the now 100 million-selling family of iPads.

Although Steve Jobs swore off the idea of creating a smaller iPad in 2010, saying the smaller screen size wouldn’t provide a good user experience for the device’s software and apps, the growing popularity of smaller tablets seems to have changed Cupertino’s tune. Typically for Apple, today’s event was heavy on technical information and comparison shots, but most interesting comparisons Apple’s senior vice president of worldwide marketing Phil Schiller made weren’t made to other Apple devices — they were aimed squarely at Google’s Nexus 7.

According to today’s presentation, the iPad Mini offers 29.6 inches of screen real estate, compared to the Nexus’ 21.9. This, according to Schiller, translates into seeing between 49 and 67 percent more on your screen while browsing the web, even though the Nexus 7 has a larger 1200 x 800 screen resolution.

The iPad Mini’s 1024 x 768 resolution may be slightly smaller that the Nexus 7′s, but it gives the device the same resolution as the iPad 2. This means native iPad apps will look natural on the device — no upscaled phone apps, no downscaled iPad apps, and no new resolution for iOS developers to deal with.

While today’s product announcement may not have been totally surprising, the developers we spoke to were excited by the market potential of the iPad Mini.

Supercell, the Finnish company that recently revealed it was earning more than $15 million a month on iOS, is betting the iPad Mini’s new lower price point and size will be attractive to consumers, many of whom might have been considering purchasing an Android-based tablet like the Nexus 7.

“I think the comparisons they showed demonstrate exactly why the experience is superior on the Mini.  Right now, it’s tough to see how others will be able to compete with the Mini,” says Greg Harper, the company’s general manager, North America. “There is actually very little we need to change to bring our games to the Mini. It is a big win for us.”

Today’s news was also good for Supercell given the fact that the company credits its “tablet-first” development strategy for much of its success — Harper tells us his company’s revenues are equally split between the iPad and the iPhone, despite the fact that iPhones have a much larger install base than iPads.

“We’ve always said that the best games on any platform are the ones that are developed from the ground up for it where you don’t make any compromises to support another platform.  That has been our approach, and so far, it’s been working pretty well for us,” he says. “With the introduction of the Mini and continued strong growth of iPads, I expect we will most likely continue to see our iPad revenue increase as a percentage of our total revenue.”

DeNA’s North American subsidiary Ngmoco is also optimistic about the tablet.  ”Whenever Apple jumps into a category it increases awareness of the devices for consumers and creates a rising tide that will float all boats,” says Doug Scott, the company’s VP of marketing and revenue.

The iPad Mini is also going after the Nexus 7 in terms of price. The 16GB Wi-Fi version of the iPad Mini is $329, which makes it significantly more expensive than the Kindle Fire, but only $30 more than a Nexus 7.  It’s a pricepoint that allows Apple to keep its longstanding “premium product, premium price” mentality, while indirectly allowing the iPad Mini to compete with the Nexus 7 for the lower end of the tablet market.

The mood at Google headquarters is likely mixed after today’s announcement. While the size, price, presentation and very existence of the iPad Mini all  validate the impact Android is beginning to have on the tablet market, it seems Apple isn’t willing to let the Nexus 7 take a share of the tablet market without a fight.  With Apple now willing to compete on user experience and price, the race to lock up the lower end of the tablet market will be a hard contest for Google to win if its efforts to improve Android tablet experiences don’t bear fruit.（source：insidemobileapps）

One more thing: There’s a fourth generation iPad to

One more thing: There’s a fourth generation iPad too

Revealing the iPad mini wasn’t enough for Apple, as the firm has also unveiled a ‘fourth generation’ iPad.

Why release another when there was a new iPad released back in March, you ask?

Well, Amazon souped up its original Kindle Fire at the Fire HD launch and Apple seems to have followed suit.

There’s no difference in terms of size – it still measures at 9.7-inches – but this time comes with an A6X chip which is designed to double the graphics and processing performance of the A5X found in the iPad 3.

As with the iPad mini and iPhone 5, the fourth generation iPad sports Lightning connector support, while it has wi-fi only and wi-fi and cellular connectivity options.

4）iTunes App Store earned $3.6B since January, has now paid out $6.5 billion to developers

Apple has paid $6.5 billion to mobile app developers over the lifetime of the iTunes App Store, Apple CEO Tim Cook announced today at the company’s iPad Mini event in San Francisco. That means the App Store has generated roughly $9.3 billion in lifetime revenue, with Apple earning more than $2.8 billion from its 30 percent cut of sales.

Back in January, Apple announced that it paid $4 billion to developers, implying the App Store saw more than $5.7 billion in revenues up to that point. Today’s figures mean the App Store has generated $3.6 in revenue since the beginning of 2012, and its lifetime revenue total has increased by more than 63 percent since January.

“We’ve reached another milestone — customers have downloaded 35 billion apps from the store. This is jaw dropping,” Cook said, going on to explain that the App Store continues to exceed expectations.

“We work hard to make sure all of our products are upgradable to the latest operating system. After just one month, we have 200 million devices running iOS 6,” Cook said, noting the quick adoption rate of the new operating system since it was introduced alongside the iPhone 5.

Touting cloud capabilities across Apple’s mobile and desktop devices, Cook said that there are currently 125 million documents in iCloud.

Cook then segued to revealing a new version of iBooks that’s better integrated with iCloud, allowing readers to start reading a book on one device and pick it back up where they left off on another. The new version of iBooks also adds a new sepia theme, continuous scrolling and the ability to share quotes from the book on Twitter and Facebook. Cook mentioned that iBooks is available in 40 languages while demoing a Korean-language book. Overall, more than 400 million books were downloaded from the iBooks store since its inception, Cook said.（source：insidemobileapps）

It may be hard to believe that there are other phones on the market beyond the iPhone and Samsung Galaxy, but there are.

In fact, the NPD Group says sub $150 smartphones will account for a 29 per cent share of the smartphone market by 2016 – spiking to 60 per cent for the APAC region.

Android will also power a large number of the devices, rising from two per cent this year to 29 per cent in 2016.

Shawn Lee, research director at NPD DisplaySearch, said: “Most mobile phone subscribers around the world can’t afford to spend more than $200 for a smartphone, on top of their service plans.

“Low-cost smartphone manufacturers create these new products quickly without much investment, which has allowed them to extend their telecom subscriber base to emerging regions.”（source：mobile-ent）