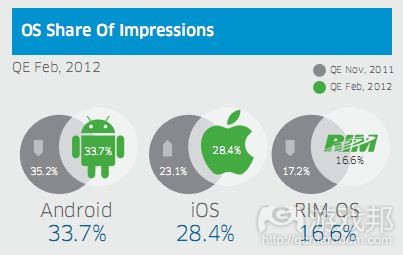 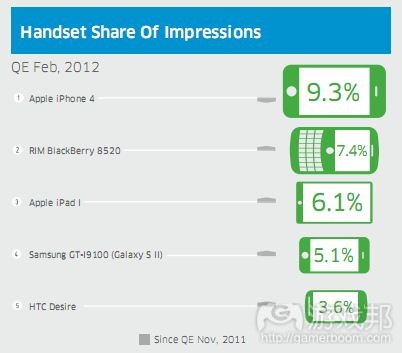 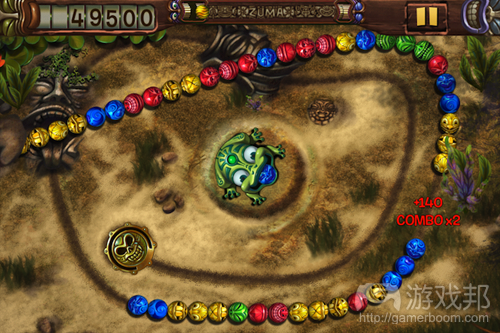 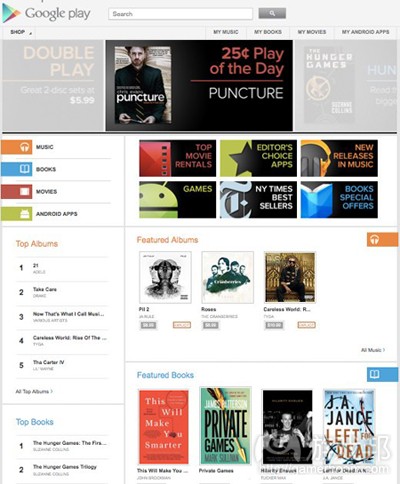 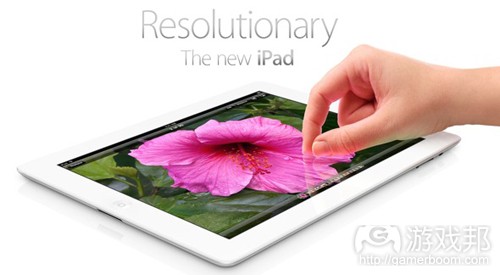 Apple’s iOS is gaining ground on Android across Europe according to the latest Mobile Insights report for the month of February published by ad network InMobi.

According to the paper, Android remains the dominant platform in the region with a 33.7 percent share of impressions on the network, though its market share is gradually being eroded by iOS.

It’s the start of what looks to be a similar trend observed by InMobi in North America, where iOS overtook Android for the first time in January, thanks to a surge in demand for Apple’s iPhone 4S.

Outside of the big two, however, InMobi states RIM’s share of the market is holding strong on 16.6 percent – almost the same share as the firm amassed in November.

This stands in contrast to North America, where BlackBerry fell back by 4.1 percentage points over the same period, finishing up on 13.1 percent.

When it comes to individual handsets, Apple rules the roost. iPhone 4 alone counts for 9.3 percent of European impressions on InMobi’s network, with the original iPad holding third spot on 6.1 percent.

RIM’s BlackBerry 8520 was also a strong performer in February, accounting for 7.4 percent of impressions.

“We expect to see continued growth in iOS, driven by last week’s unveiling of the new iPad, as well as the reduced pricing of the iPad 2,” said VP and MD for the EME region Rob Jonas, looking ahead.

“The iOS growth on our network and increased adoption of tablets overall align with the results of our recent Mobile Media Consumption Study, which reveals that European mobile consumers are already spending more time on mobile connected devices than TVs.”

In all, InMobi’s network across Europe grew by 63 percent during the 90 day period, equal to 15.2 billion monthly impressions.（source:pocketgamer）

The smartphone space is growing at phenomenal speeds, with all manufacturers rivalling in the hope of becoming one of the big three market vendors.

Now, new research from analyst iGR expects smartphones to account for 96 per cent of mobile phone sales in American by the close of 2016, which is up from 76 per cent in 2011 and just 33 per cent in 2009.

The report claims the swift rise of US smartphone adoption is down to feature phone users converting during upgrades and replacements, mass enterprise use, and tech improvements such as 4G and NFC enticing data-hungry consumers.

Iain Gillott, president and founder of iGR, says: “The growth in the US smartphone market has been very strong in the last few years. But as the market becomes saturated, smartphone sales growth will slow.

“For OEMs who are hoping to gain, or regain, market share in the US, the time to act is now. By 2014, we believe the majority of the smartphone sales growth will be over.”

Additionally, iGR believes the market has hit a design wall as each firm trying to outshine Apple, inevitably means that all phones look pretty similar.

With the likes of Apple, Samsung, Nokia, Sony, BlackBerry, LG, ZTE and Huawei on the market to name just a few, it’s unlikely anymore competition that enters after 2014 will succeed, according to the report.（source:mobile-ent）

Zuma’s Revenge is a new release for iOS devices from PopCap. It comes in two versions — an iPhone-only version, and an HD Universal version optimized for the iPad and Retina display devices to run the game at its full resolution.

In Zuma’s Revenge, players have control of a frog which spits out colored balls. Similar balls roll slowly around a track on their way towards a hole, and by matching groups of three or more balls together, the player is able to make them disappear. Certain balls carry special abilities which are unleashed when matched, such as exploding and destroying adjacent balls, or temporarily giving the frog the ability to destroy balls without having to match colors. If the balls fall down the hole, the player loses. To win, on the other hand, players must first score enough points to fill a progress bar at the top of the screen, at which point no further balls will emerge. When this has happened, the player must then eliminate all balls on the screen to complete the level. Bonuses are given at the end of a level according to how quickly it was completed and the biggest combos that were created.

The game is played using simple touch controls. Unlike the computer and console versions, where players must control the frog’s rotation and aim its shots themselves, the iOS version allows players to simply tap on the screen where they would like the ball to fire. This makes for a much more fast-paced game, but still leaves margin for error if the movement of the balls is not taken into account. The game also includes a number of twists on the original Zuma’s level design, which always involved the frog being at the center of the screen and rotating — in some levels on Revenge, the frog moves back and forth across the bottom of the screen firing upwards instead, making for a slightly different play style.

Alongside the main Adventure mode, which tasks players with progressing through a series of increasingly difficult levels (including boss fights), completing the tenth level unlocks Challenge Mode. This is a series of one-off levels in which players are given three minutes to score as many points as possible in an attempt to beat two target scores. The game does not, however, feature a Blitz mode based on the popular competitive Facebook incarnation of Zuma, nor does it include any social features run through Game Center, OpenFeint or even EA’s own Origin service, which is something of a surprise.

Zuma’s Revenge isn’t the first game to carry the Zuma title on iOS, but it is the first Zuma-branded game which actually comes from the game’s developer PopCap. Coincidentally, the numerous “fake” Zuma apps that have been visible in the charts in recent weeks now appear to have vanished from the App Store, though titles which play similarly but do not carry the Zuma name are still present. This includes Zuma’s direct inspiration Puzz Loop, published by Hudson Soft. Zuma was accused of being a clone of Puzz Loop upon its original release, with developer Mitchell even going so far as to say that PopCap had infringed on their intellectual property. PopCap responded that Zuma was “not an exact clone” but rather an elaboration on Mitchell’s original idea, and the two titles have coexisted since.

According to our tracking service AppData, Zuma’s Revenge is currently the No. 3 top paid app and the No. 2 top paid game. Meanwhile, the more expensive HD version is the No. 196 top paid app, No. 5 top paid iPad app, No. 102 top paid game and No. 4 top paid iPad game. The game’s success is likely partly due to Apple’s featuring of the game as Game of the Week in certain territories (though not in the U.S., where that honor currently belongs to Mass Effect Infiltrator) but also positive associations with the PopCap name and past experiences of the Zuma brand.（source:insidemobileapps）

Android developers from across Europe have taken to Google’s official forum to claim they’re yet to receive Google Play revenue from their titles for the month of February.

Google was meant to have paid studios all cash generated from their titles on the newly rebranded marketplace through Google Wallet at the start of the month.

However, scores have claimed the money is yet to be deposited in their bank accounts.

“Developers are usually paid on the 2nd of the month, arriving in bank accounts between 5th and 7th,” a well placed industry source told us.

“All have been marked as ‘paid’ on the 2nd, but not received so far. Most people have contacted Google Merchant team but nobody has had anything other than an automated response so far and there’s no comment from Google on the forum thread dedicated to this problem.”

Phandroid reports developers using Google’s AdMob and AdSense are also reporting problems with payouts, though Google is yet to acknowledge the problem even exists publicly, let alone proffer a solution.

“There are lots of indie developers with cash-flow problems, and lots of disappointment at being treated this way by Google,” our source added.

Most of the developers involved are located within Europe – Portugal, France, Spain, the Netherlands and the UK a few territories popping up repeatedly – though one developer from the US claims he’s yet to receive payments owed to him from January.（source:pocketgamer）

Adding to the reaction of iOS developers already on record, 10tons president and CEO Tero Alatalo has detailed the difficulties his studios will face adapting to development on Apple’s forthcoming third generation iPad.

Speaking via a post on the studio’s blog, Alatalo claimed the device’s Retina Display is something of a double-edged sword.

“While the extra pixels come with extra download cost, they also require extra work for developers carefully crafting them. Simply scaling up the images in Photoshop doesn’t add in more detail.”

As well as hefty downloads and extra work for developers, there are practical problems to overcome when developing an app for such a high resolution display.

What’s more, 10tons has found that iOS simulator on iMac struggles to run 2048×1536 games, with frame rates slowing to a near standstill.

Alatalo also questioned whether the new iPad’s A5X system-on-a-chip will be powerful enough to handle the massive jump in resolution.

10tons isn’t the first developer to raise such concerns.

Ste Pickford, co-founder of Zee-3, expressed similar doubts, stating, “I suspect the machine won’t quite match the performance of the iPad 2 for games, with the improved hardware probably not quite up to the job or pushing around four times as many pixels.”

Similarly, Byron Atkinson-Jones, the founder of Xiotex Studios confided to us: “Yes, I’m excited about the increase in resolution, but at the same time I wonder if the graphics chip is going to end up realistically being the same speed as the iPad 2 is currently.”

He also expressed excitement at the new hardware’s possibilities, and appears optimistic that developers will overcome the challenges of working with the new iPad.

“All those problems are mostly minor nuisances that will go away with time,” he concluded.

“The next iPad after this will most likely have even more horse power much like iPhone 4S had over iPhone 4. The display makers will start selling wallet-friendlyhigh resolution displays. We will all have unlimited amount of lightning-fast bandwidth. And flying cars.”（source:pocketgamer）

6）King.com getting into mobile with Fabrication Games acquisition

News has just broken that Facebook power-player King.com has acquired mobile developer Fabrication Games in an effort to establish a presence on iOS and Android devices. Don’t feel bad if you don’t recognize the Fabrication name, they’re a smaller studio (only 12 employees) based in Sweden. The company has published a few smaller-scale games such as Bugfest and The Game Trail, but are still looking for their first big App Store hit.

In many ways the acquisition looks to be a “me too” move by King.com as they watch competitors such as Zynga and EA move into the mobile space. King.com has a very strong Facebook presence, largely due to the success of Bubble Witch Saga, which we assume will be the first mobile game published under the new arrangement. It helps that both King.com and Fabrication are based in Sweden, which should make collaboration a bit easier than if this were an international partnership. Still, partnering with a largely unproven team to create games on a new platform is quite a bold move.

Then again, King.com’s foray into mobile might be an attempt to inflate the company’s upcoming IPO, planned for some time in 2013. Rumor has it King.com has their eye on a NASDAQ listing, and we’re guessing that being able to say you’re both a Facebook and mobile publisher does wonders for your stock price. In any case, we send out our congratulations to both companies and wish them well as they attempt to crack the iOS and Android code.（source:gamezebo）