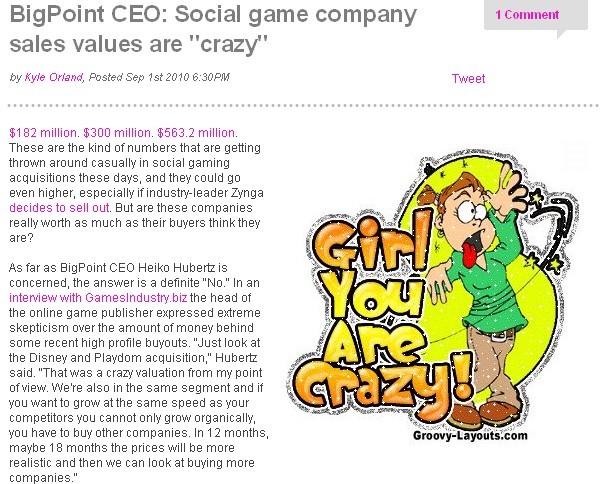 $182 million. $300 million. $563.2 million. These are the kind of numbers that are getting thrown around casually in social gaming acquisitions these days, and they could go even higher, especially if industry-leader Zynga decides to sell out. But are these companies really worth as much as their buyers think they are?

As far as BigPoint CEO Heiko Hubertz is concerned, the answer is a definite “No.” In an interview with GamesIndustry.biz the head of the online game publisher expressed extreme skepticism over the amount of money behind some recent high profile buyouts. “Just look at the Disney and Playdom acquisition,” Hubertz said. “That was a crazy valuation from my point of view. We’re also in the same segment and if you want to grow at the same speed as your competitors you cannot only grow organically, you have to buy other companies. In 12 months, maybe 18 months the prices will be more realistic and then we can look at buying more companies.”

But are the prices so unrealistic now? That largely depends on what you think of the future prospects of social gaming. If you agree with Screen Digest’s prediction that social gaming is going to be worth $1.5 billion a year by 2014, then investing millions for an established front-runner in the space doesn’t seem so ridiculous. On the other hand, if you think social games are a fad that most players will soon grow tired of, those millions of dollars might as well be toilet paper.

Hubertz, for his part, is looking to zig where others are zagging by scooping up what he sees as struggling, undervalued publishers in the traditional console market. “In the traditional games industry, in the boxed industry, there are developers who are really struggling and they are not asking for high valuation, they are just asking for survival,” he said. “We’re looking exactly for these kind of developers because when it comes to high quality 3D games they have the experience. We can just give them another engine, they don’t need to use the Xbox or PlayStation technology, they can use our web technology. They can still develop the same quality of game it’s just for a browser.” （source：games）