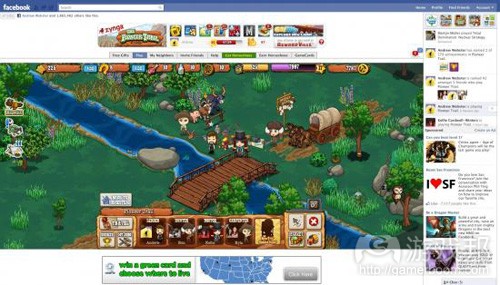 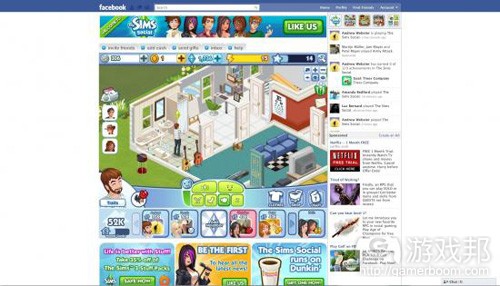 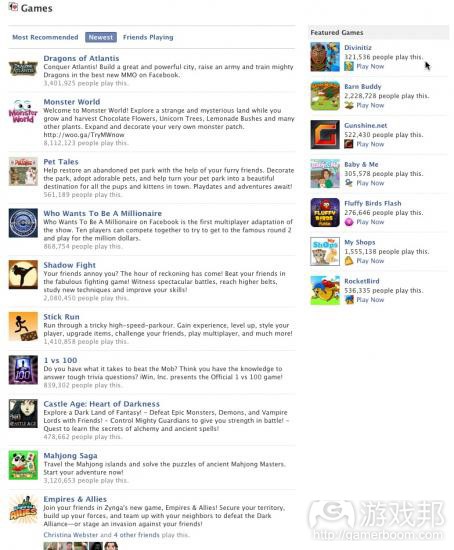 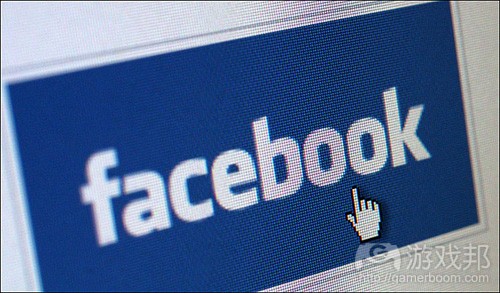 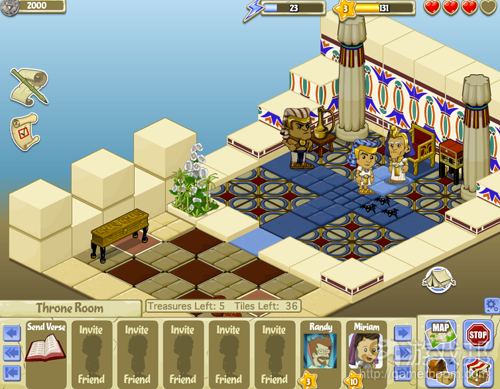 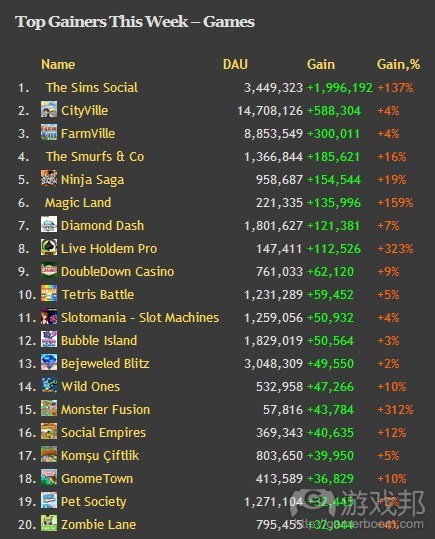 Announced nearly two weeks ago, Facebook’s minor redesign for games is slowly starting to roll out to users. The changes were made in an attempt to improve the experience players have while actually in a game, as well as improve discoverability by making it easier to find games that you want to play. From what we’ve seen so far the changes are solid improvements, or at least they will be once everything starts to work as advertised.

One of the big changes is that, while playing a game, Facebook now makes better use of your screen real estate so that games are no longer confined to a tiny little box. You can check out this feature in action while playing the new Pioneer Trail expansion for FrontierVille: as you expand and contract your browser window the game grows and shrinks alongside it. It’s pretty slick and makes for a better playing experience.

Unfortunately most games don’t seem to support the new feature yet. Most of the games we tested, including new releases like The Sims Social (pictured above) remained confined to the traditional square playing area. Whether these games will be updated to make use of the feature is unclear.

You’ll also notice a new information bar on the right side of the screen that presents some useful data, including links to your most recently played games. There’s also a real-time game news ticker that updates as your friends accomplish things in the games they are playing.

In addition to the games themselves, the Games page has also received a facelift. Instead of simply seeing a list of requests (though these still show up) and your most recent games, the Games page now has three different sections: “Most Recommended,” “Newest,” and “Friends Playing.” The “Most Recommended” section seemed to simply be a list of some of the more popular games on the platform. For me the top three games listed were CityVille, Empires & Allies, and Gardens of Time, all top 20 apps in terms of monthly active users.

The other two sections weren’t quite as useful as they first appeared to be. The “Newest” section listed some relatively old games like Empires & Allies and Monster World, while the “Friends Playing” section had just three games: FarmVille, Lexulous, and Bejeweled Blitz. This was especially strange since everyone I know seems to be compulzively playing The Sims Social.（source:gamezebo）

Social networking behemoth Facebook reached 1 trillion pageviews in June, according to new data. Facebook is the most-visited website on the Internet, according to data compiled by the ad network DoubleClick, a subsidiary of Google.

In June 2011, Facebook received about 870 million unique visitors, a figure that exceeds the number of registered users the site has by about 120 million. That’s because many of the site’s pages come up in search results and are generally visible to non-users, if only partially.

According to this data, the site gets nearly 1,150 pageviews per visitor. That’s an extremely sticky website. Yet it comes as little surprise considering how much time many users spend on Facebook doing things like clicking through photo galleries (each photo counts as a pageview), playing games like FarmVille and viewing other people’s profiles.

The data released by DoubleClick does not include adult websites, ad networks and certain sites owned by Google.（source:readwriteweb）

Zynga announced an expansion of its game card distribution in Europe today that adds 18 new countries to its reach via a partnership with epay, a division of Euronet Worldwide, Inc.

The game cards allow player to purchase virtual goods within Zynga’s games. The cards themselves are available at retail stores and kiosks available from within epay’s network of locations. The partnership grants epay retailers to offer in-store bonuses like free virtual goods, or customized marketing promotions and discounts.

The first Facebook title from Hexify Inc., Journey of Moses, is a a treasure-hunting adventure game based on the life of the prominent figure from the Bible’s Old Testament. With relatively few games sporting religious themes, this title has seen its usage skyrocket since launching earlier this month.

According to our traffic tracking service AppData, Journey of Moses currently has 64,342 monthly active users and 22,662 daily active users.

Journey of Moses is divided into levels, each with their own objectives. Early in the game, players (as Moses) are tasked with simple things, such as finding and collecting all the pieces of his royal outfit. This is achieved by clicking on floor tiles in order to reveal what’s beneath them. This action requires energy to perform and most often results in the player receiving a reward of gold, shekels and experience points. Sometimes, special items are unearthed, including the aforementioned clothing, as well as necklaces, statues, writing tools and other objects that go into collections. Gems can also be found, and these are required to “bribe” the player’s way past guards in the royal palace. Once the player has performed 100 percent of the actions possible in any given level, they can move onto the next.

Social features include sharing accomplishments and asking other players for help obtaining certain items through viral channels such as users Walls, as well as the ability to visit friends once they’ve been invited to the game. Doing this takes players to their friends’ camp screens, where they can collect a daily gem.（source:insidesocialgames）

5）The Sims Social, Zynga Lead This Week’s List of Fastest-Growing Games by DAU

EA Playfish’s The Sims Social holds the lead on this week’s list of fastest-growing games by daily active users. CityVille and FarmVille round out the top three.

Note: Due to a Facebook reporting delay begun August 20, these numbers date back to last Sunday, a particularly low-traffic day for social games.（source:insidesocialgames）

Although Facebook has secured the top spot with 750+ million users, the rapid growth of Google+ (with an estimated 25 million users) must be making the social media giant nervous.  SingleGrain has highlighted the differences between Facebook and Google+ via an Infographic and elaborated the benefits and drawbacks of both networks.

Although Facebook still holds the lead in total users, Google+ is certainly catching up. The privacy controls and simple sharing tools could give Google+ an edge to draw in even more users if they can expand outside their current demographic.

SingleGrain did a side-by-side comparison of both the networks in the Infographic. For example the Infographic discussed different ways Facebook and Google+ deals with friends, chat, and privacy settings. According to the graphics, Facebook had 713.6 million unique visitors during the month of May alone and the site accounted for 55 % of the total visits to the social networking sites in addition to generating 40 % of the total daily internet traffic worldwide.

Both Facebook and Google+ are male dominated having 51.2% and 73.7% of male population respectively. Top occupation on Google+ belongs to engineers, holding about a quarter (24.56%) of its total users. Software developers, web-designers and software engineers are among the other popular occupants on Google+ holding 13.57%, 10.77% and 10.05% respectively. Google+ has now become the fastest growing social network in the history, but it still remains to be seen, if Google+ could one day become as big as Facebook, if not bigger.（source:socialtimes）