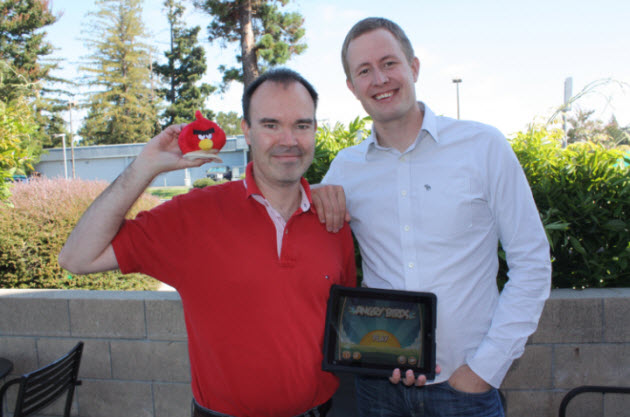 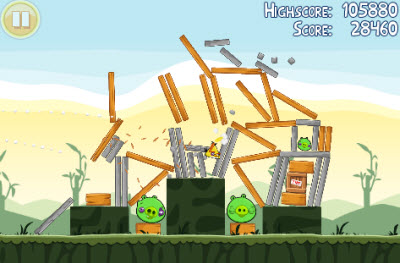 The creators of smash hit game Angry Birds  visited me yesterday, and they were all smiles. The two developers from Helsinki-based company Rovio have sold more than 6.5 million copies of the iPhone game on the App Store since December. And the free version of the game, which entices people to upgrade to the pay version, has been downloaded more than 11 million times in 60 countries.

Peter Vesterbacka (pictured above, left), who goes by the title Mighty Eagle and heads Rovio’s North America operations, and his boss, Mikael Hed (pictured at top, right), say their company hasn’t spent a penny on advertising. Now the goal is to keep it going.

Rovio got started in 2003 as Relude. It was started by three students from the Helsinki University of Technology: Niklas Hed (Mikael’s cousin), Jarno Vakevainen, and Kim Dikert. They had participated in a mobile game competition sponsored by Nokia and Hewlett-Packard. Vesterbacka, who worked at HP, was one of the judges, and he suggested the trio start their own mobile games company. They did so. Digital Chocolate published the game, which was called King of the Cabbage World, a multiplayer real-time game on the now vintage GPRS system. They started doing work-for-hire games, creating titles such as Need for Speed Carbon for Electronic Arts.

Now they have produced 52 games that have been installed more than 250 million times. They were so successful that Vesterbacka joined them. Most of those games were designed for others. They made hits such as Real Networks’ Collapse Chaos, but always on a work-for-hire basis.

Mikael Hed joined as CEO in early 2009 and steered the team toward thinking about making internally produced games that it could own. The company took on more work-for-hire projects, but hired its own subcontractors to make them. That freed up the internal team to make its own games. Of the 52 titles the company’s created, it owns 16.

The team’s leaders started contemplating how to do the perfect iPhone game. They wanted to exploit the iPhone’s hardware, create memorable characters, and do a fun game that people would play over and over again. They conceived the game and targeted it at everyone: men, women, girls and boys.

“We wanted to eliminate luck from the equation,” Hed said. “So we focused on every detail.”

There were other catapult games that had become popular, so they decided to use that familiar mechanic. The game they created has players shoot angry birds with a slingshot to destroy structures.

The game used physics, giving people the joy of knocking out items strategically, as if they were bowling. And while many games have the same kind of catapult mechanic, the Angry Birds characters are funny to look at. And it’s fun to shoot at the evil green pigs who have stolen the birds’ eggs. The pigs mock you if you mess up.

Ten of the company’s developers (only a few of them full-time) worked on the game. They chose Chillingo as their publisher because it had numerous other hits on the iPhone and they felt Chillingo could market their game best. It debuted on the iPhone in December, catching on in Finland first through the team’s own social circles. Friends showed it to friends. The title took off like a virus and spread to Sweden. Then it became the No. 1 hit on the App Store in the United Kingdom, selling for 99 cents.

Apple featured the title, making it easy for users to discover and try out. The company started a Facebook fan page, uploaded a video to YouTube, and started its own Twitter account. All of them were successes. The YouTube video and other fan-generated videos have been viewed more than 6 million times. On Twitter, celebrities such as skateboarder  Tony Hawk, musician Pete Wentz, and Frankenteen tweeted about their addiction to the game. Hawk said, “Recently finished Angry Birds on iPad and now I’ve lost my sense of purpose.” Jimmy Fallon joked about it on his NBC show.

Somebody now tweets about Angry Birds about once every minute.

As it became a cultural phenomenon, Angry Birds gathered steam in the spring and then finally hit the top of the charts in May in the U.S. As Apple launched the iPad, Rovio launched a $4.99 version, which has sold more than 200,000 copies. Now it is being downloaded more than 50,000 times a day.

With Apple’s 30 percent cut, Rovio has generated revenue of $4.5 million. They haven’t yet instituted ads, but say they are considering doing so. Now they’re pursuing what they call the “Tetris strategy,” which is to find new users across many different platforms.

Meanwhile, more than 77 percent of Angry Birds players update the game as new levels become available. And a new update comes out every three or four weeks. Hed said the goal is to extend the franchise and make it as memorable as Nintendo’s Mario character. Vesterbacka says the cute little fuzzy bird merchandise is proving to be quite popular. As soon as he sets it on a table in a coffee shop, people come over and ask if it’s an Angry Birds plush toy. And the company’s developers are hard at work on something new.

Next week, Angry Birds is debuting on Palm. It will come soon to Android phones. And Vesterbacka said that a version for Nokia’s newest phones will also debut at some point in the future.（source：venturebeat）