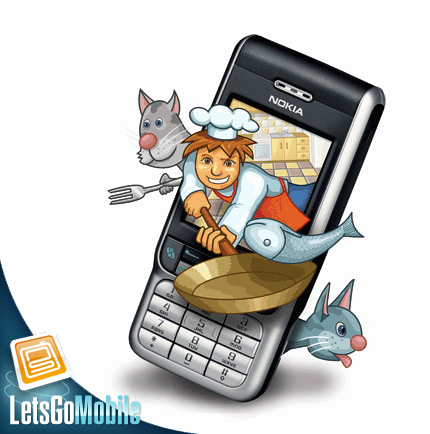 With sales of console and handheld systems having stalled, the attention of the video game industry has turned to the fast-growing cell phone video game market, according to the market research firm iSuppli Corp.

With their ubiquity and ownership by a large segment of an electronics-enamored public, mobile phones equipped to play games and other forms of electronic entertainment vastly outnumber their rival dedicated gaming platforms. In 2010, factory unit shipments of game-capable mobile phones are forecasted to reach 1.27 billion, up a solid 11.4 percent from 1.14 billion last year. 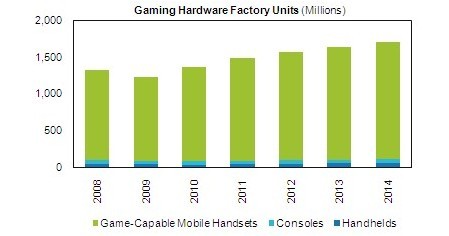 In comparison, figures during the same period for consoles and handhelds are expected to be flat or down. Factory units for video game consoles will total 52.3 million in 2010, up a marginal 0.2 percent from 52.1 million in 2009. Handheld devices will fare worse, with factory units declining 2.5 percent to 38.9 million this year, down from 39.9 million in 2009.

“The formidable lead enjoyed by cell phones capable of gaming will continue in the years to come with no hint of decline, and their near-universal presence gives them the potential to become a viable competitive threat to dedicated gaming platforms, primarily handheld devices,” said Pamela Tufegdzic, consumer electronics analyst at iSuppli. “And although gamers who prefer a superior gaming experience will always opt for either a console or handheld, sales of both platforms tend to rise and fall based on the vagaries of product development, consumer buying patterns and economic trends.”

The great disparity in numbers between consoles and handheld devices on the one hand, and cell phones on the other, will enable mobile handsets to spur growth in the overall gaming market.

In the case of consoles and handhelds, growth has slowed in recent years. The PlayStation 3 and PlayStation Portable platforms from Sony Corp., the Xbox 360 from Microsoft Corp., and the DS and Wii platforms from Nintendo Corp. have reached a mature phase in their individual life cycles and have attained market saturation. Furthermore, consumers have been reluctant to buy or upgrade to newer devices due to a number of factors, including the high price points for current offerings, the imminence of next-generation products and the prevailing economic uncertainty of the times.

In comparison, mobile handsets—especially smart phones like Apple Inc.’s iPhone—continue to thrive and flourish. Handsets also enjoy the advantage of broad penetration: not everyone owns a gaming console or handset, but cell phones can claim widespread use.

Despite the cell phone onslaught, consoles are putting up a good fight.

The forthcoming release of motion-sensing play from Sony’s Move and Microsoft’s Kinect is expected to breathe new life into the console space, helping to cushion the anticipated decline of overall current-generation consoles in 2011. Furthermore, as soon as late 2012, the big three gaming OEMs are expected to launch next-generation consoles, raising revenues and unit shipments into 2014, when the console market will hit 59.9 million units.

Beyond pure gaming, consoles also are extending their sphere of influence to the digital living room. As more multimedia services become available online, consoles will evolve into true entertainment centers, allowing media streaming and other video or picture content to be delivered directly to supported devices like televisions and computers.

Such online functionality will serve to expand revenue for the old gaming stalwarts—offsetting the advantage in sheer numbers enjoyed by their rivals in the mobile handset space, iSuppli believes. In addition, new revenue streams from paid downloadable content will continue to grow well into the future, helping consoles and handhelds maintain presence in a changing landscape.