games are the most popular mobile app(from nielsen) 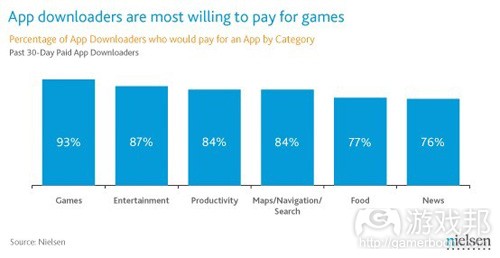 app downloaders are most willing to pay for games(from nielsen) 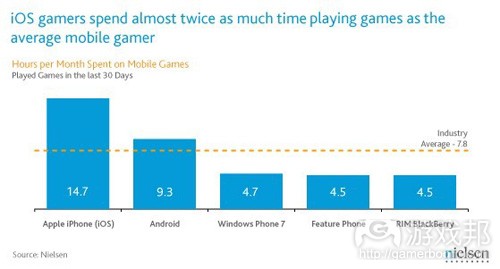 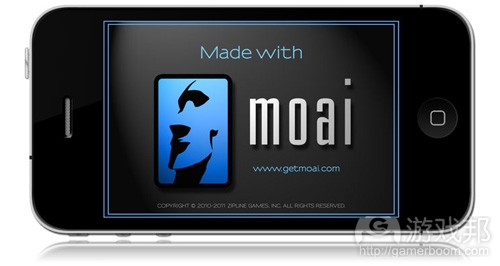 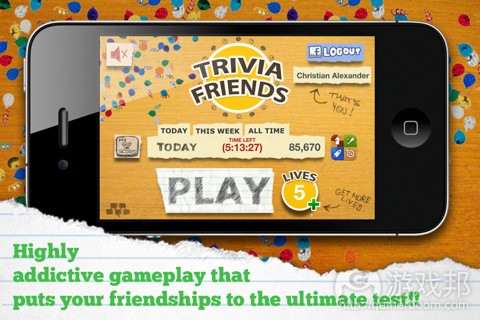 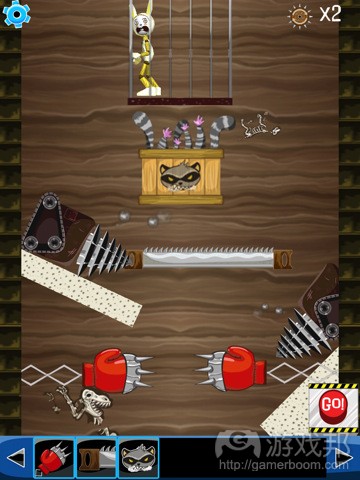 Almost two-thirds of mobile app users have played a game on their device in the past month, according to a Nielsen survey released today.

Sixty-four percent of users reported playing a game on their mobile device, with 93 percent of downloaders reporting that they were willing to pay to play. Not surprisingly, iOS and Android users play games on their devices the most each month (14.7 hours and 9.3 hours, respectively).

The mobile gaming space is continuing to boom. Speaking with local mobile game developers in the past week, they see the space continuing to expand as smartphones and tablets gain market share.（source:techflash）

Play Before Work: Games Most Popular Mobile App Category in US

Games continue to be the most popular app category, and according to Nielsen research, 93 percent of app downloaders — those who have downloaded an app within the past 30 days –  are

Among smartphone consumers who have played mobile games in the past 30 days, those with iPhones, Windows 7 phones or Android phones are the most likely to have downloaded the games they played, while those with Blackberry phones or featurephones tend to play pre-loaded games.  The average mobile gamer plays an average of 7.8 hours a month.  Those with iPhones tend to play around 14.7 hours each month while those with Android smartphones play around 9.3 hours per month.（source:nielsen）

“Developers can focus on a single language — Lua — rather than switching between three different languages for iOS, Android and cloud,” Zipline CEO Todd Hooper told Gamasutra.

The open-source development environment offers commercial licenses for large studios, Hooper told Gamasutra, and will eventually charge for access for usage of cloud services, which are offered for free during the beta.

Moai is already being used for Harebrained Schemes’ Crimson project, which was recently announced as the first title in the Bungie Aerospace mobile indie development program.

“The Moai platform is helping us build a great game faster than we could have otherwise,” said Harebrained Schemes founder Jordan Weisman in a statement. “It allows us to get our ideas on to multiple hardware platforms very quickly so we can play test them on the actual devices.”

The platform is also being used to power downloadable content for Nay Games’ top-selling iOS game Bubble Ball, which has attracted 10 million downloads so far.

“Moai’s cloud services are perfect for Bubble Ball’s new downloadable content,” Nay Games president Robert Nay said in a statement. “I get to write the cloud backend in Lua, the same language as Bubble Ball itself. Also, I don’t have to set up the servers and worry about them going down. It’s all done for me.” （source:gamasutra）

Trivia with Facebook Friends, not to be confused with Zynga’s Words with Friends or other ‘with Friends’ games, has arrived in the AppStore today. The new trivia game for iOS is designed to test just how well you know your friends (or ‘friends’) on the world’s most popular social network. While this isn’t the most original idea, the Los Angeles-based creator Mention Mobile does a fine job of harnessing all of those personal, yet still very public, tidbits from your pals and turning it into an amusing way to pass the time.

Start the game, connect it to your Facebook account and then answer a series of questions about your Facebook brethren, which include birthdays, hometowns, dating and marital info and details on recent Facebook activity. Most of the questions I encountered during a quick five-minute play-through included a combination of these factoids. These are mixed in with additional timed puzzles where you have to identify people’s profile pics or order a list of friends from youngest to oldest.

Every players starts Trivia with Facebook Friends with five lives, which are lost when a question is answered incorrectly. Once your lives are gone, it’s game over. Much like a classic video game, you can earn extra lives by answering bonus questions or just wait a few hours for them to replenish. Trivia overachievers have to option to buy additional lives for a small transaction, or if you don’t want to deal with this limitation, you can pay $10 for eternal lives (as well as the ad-free version of the game). It’s also worth pointing out that there is a free, ad-supported version of this game, or an ad-free version for $0.99.（source:games）

App Annie, a Hong Kong-based provider of app store analytics and marketing intelligence for Apple’s App Store, has raised an undisclosed amount in a Series A funding round led by IDG Capital Partners, the China-focused VC fund backed by IDG and Accel.

First launched in March 2010, App Annie lets app developers and publishers track sales, downloads, rankings, and reviews. The fledgling company says 13,000 users have already signed up, including marketers or executives from more than 50 percent of the top 100 App Store publishers.

Unlike competitors such as Distimo, Mopapp and Flurry, App Annie currently only supports Apple’s App Store. The startup says it will use the extra capital to expand its scope to other mobile application stores and to develop new features.

Alibaba to Build Rival Mobile OS — Chinese company Alibaba Group is apparently looking to develop a mobile OS to compete against that of Android and Windows Phone OS, says The Wall Street Journal. Alibaba Group traditionally provides eCommerce, retail, payments platform, and cloud services. The suspected released frame for this OS is reportedly scheduled for the third quarter of this year.（soruce:insidemobileapps）

appFlash, for now, is more of an experiment, as it was cooked up in just 24 hours. AppMobi CTO Sam Abadir said the company thought it would be interesting to see how Swiffy’s exported code could be integrated into the appMobi services in order to get Flash assets onto the iOS platform quickly.

However, he did note there were some roadblocks to doing things this way. For example, Swiffy’s HTML5 output doesn’t work on Android devices, the company found. So for now, the company isn’t offering Android builds using appFlash.（source:readwriteweb）

And now for something a little different. Torture Bunny is the latest title from Chillingo offshoot ClickGamer, and this brutal game of rabbit abuse is sure to have the RSPCA up in arms.

The object is to create elaborate torture devices before the eponymous long-eared lagomorph is dropped from the top of the screen to be beaten, bashed, kicked, sliced, chopped and bitten on his way to the bottom.

Featuring 50 different objects with which to build your labyrinth of pain, there’s a wide range of ways to complete each level within the game’s five dungeons. Meanwhile boss stages and a carrot-based scoring system look likely to add plenty of replay value.（source:pocketgamer）