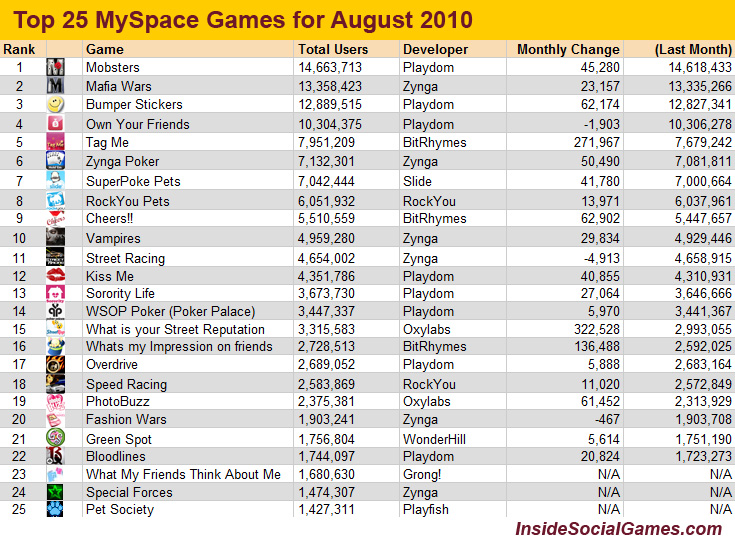 The biggest games continued to gain users on MySpace this past month, although, as in past months, the growth was not too significant.

Also, Zynga appears to have removed some of its smaller role-playing games from the list, including Gang Wars and Dragon Wars. As of yesterday, the apps were not found through MySpace searches, nor through app gallery browsing, nor were they available as MySpace titles on Zynga’s website either — these titles appear to be among the many smaller ones that Zynga has been shutting down lately.

Here are the highlights for the Top 25 MySpace Games for August 2010:

* Playdom has continued to top the MySpace charts with the long-running role playing app, Mobsters. It earned a total of 14,663,713 users this month. Other top Playdom titles include the less game-like Bumper Stickers and Own Your Friends at #3 and #4. However, the latter lost approximately 2,000 users this time around.

* Virtual pets keep their spots with SuperPoke Pets from Slide and RockYou Pets from RockYou. The two games earn around 7 and 6 million installations this month.

* Of the Zynga RPGs still milling about on the social network, Vampires and Street Racing continue to earn just shy of 5 million users. That said, Street Racing has seen a loss of around 5,000 users.

* Playdom’s Poker Palace has been re-dubbed WSOP (World Series of Poker) Poker per its re-branding of the title and earned 3.4 million installations.

* BitRhymes‘ Whats my Impression on friends moved up from #17 to #16 with a gain of over 130,000 installations, to overtake Overdrive.

* As was noted already, Gang Wars and Dragon Wars were nowhere to be found yesterday, thus allowing Fashion Wars to move up to #20 from #22.

* Heroes, from Playdom, also falls off the charts to make way for WonderHill‘s GreenSpot and Bloodlines (Playdom) at #21 and #22 with about 1.8 and 1.7 million installs respectively.

* Rounding out the list is the return of three older MySpace titles: At #23 is Grong!’s What My Friends Think About Me; at #24 is Zynga’s Special Forces; at #25 is Playfish’s Pet Society.