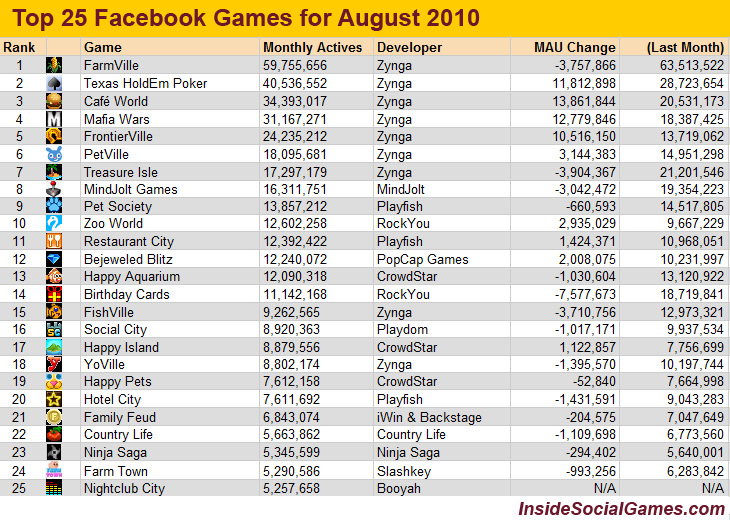 With so many apps losing users this past spring  — mostly due to a variety of changes made by Facebook to the platform – the big question has been whether or not developer growth is leveling off for the longer term. Last month, losses seemed to be lessening, but they were still apparent with 18 of the 25 applications falling in monthly active users. However, this month has already proven to be slightly better as, this time, 15 of the 25 are in the red, with drops generally less than in prior months.

Note: given that this list looks at the top 25 applications by MAU, it is not taking into account any significant growth by smaller apps, or stellar daily active user gains by any app.

There’s also a qualifier for some of the higher growth numbers visible today — the massive surges among a few big Zynga games could be due to a Facebook statistical reporting bug. We’re asking Facebook for more details, and we’ll update this post as we get them.

All that said, here are the highlights for the top 25 Facebook Games for August 2010:

* The once mighty FarmVille has continued to lose players this month with a loss of nearly 4 million monthly active users. However, that is approximately 3 million less than the losses last month, so the Zynga title’s decline may be tapering off.

* Treasure Isle, on the other hand, may be running its course as it dropped from #3 to #7 with nearly  4 million MAU loss.

* Playfish‘s Pet Society is reaching equilibrium, having only lost 660,593 MAU compared to the 1.5 million last month. It remains at #9.

* RockYou‘s Zoo World saw a huge boost this time around, moving up from #17 to #10 with a just over 12.6 million MAUs; it may be growing for the same reason as the Zynga titles, though.

* Restaurant City is another game to move out of the negatives. The Playfish title went from #13 to #11 with almost 12.4 million MAUs. It had gained just over 1.4 million — again, a possible bug could be at play here.

* PopCap is also doing well for itself. Though Bejeweled Blitz has rarely found itself in the negatives, its gains this month were nearly 1.5 million more than it was last month, bringing it up to #12 and 12.2 million monthly active users.

* Playdom doesn’t do too hot in the Top 25, as its sole entry, Social City lost another million, down by about a million, to 8.9 million MAU.

* CrowdStar‘s Happy Island finds itself in the positives, having gained about 1.1 million monthly active users. It moves up from #19 to #17.

* Though most of the list’s tail end is losing players, recently claimed Nightclub City from Booyah makes its debut on this monthly list at #25 with just under 5.3 million MAUs.