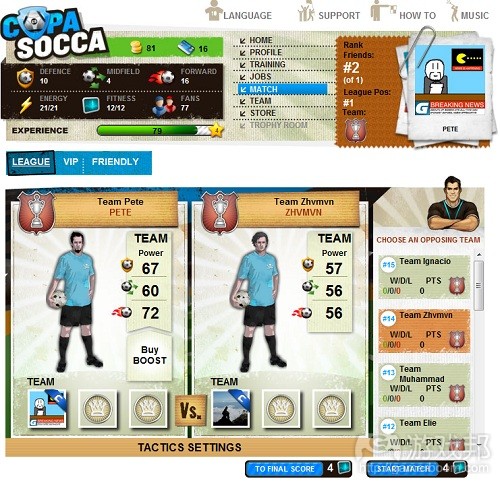 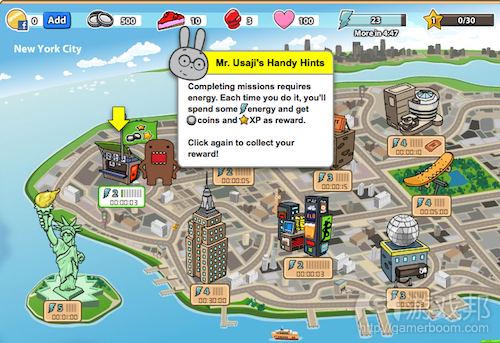 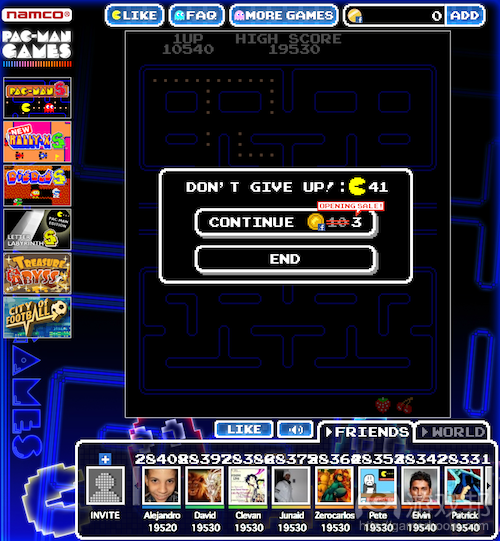 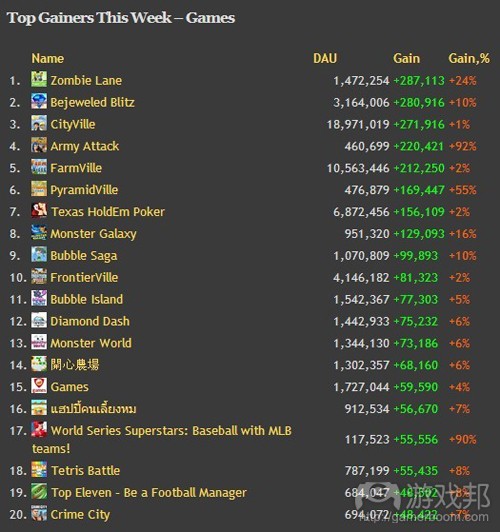 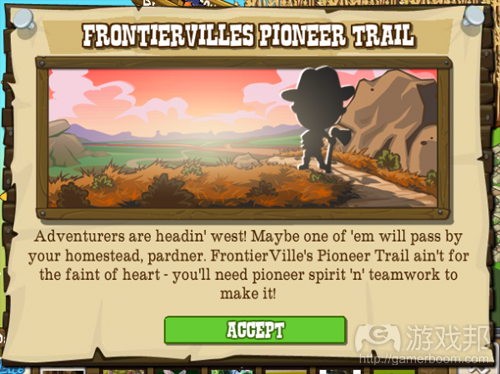 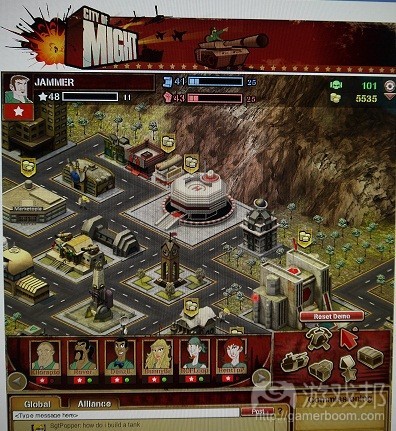 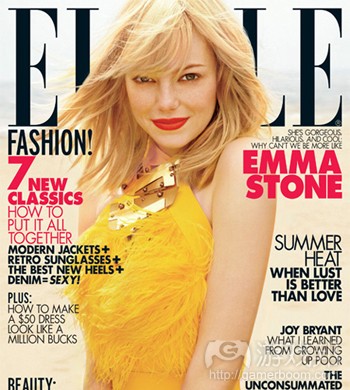 CopaSocca is a soccer-themed text-based role-playing game from newcomer Pop Rocket Games. The game launched to the public on May 25, though was silently live from the middle of April as an open pre-beta release. There was a complete database reset prior to the official launch date, however, which cost the game some early-adopter players and has caused the game’s MAU figure to decline throughout the first week of June.

CopaSocca casts players as captain of a small-time soccer team. As with other Facebook games in the sports genre, energy can be spent either on training soccer skills or on earning soft currency with part-time jobs. Once players are satisfied with their training and earnings, they can compete against other players’ teams, either watching matches via text commentary or skipping directly to the result. Players can also customize their personal avatar with haircuts, clothing and other equipment. Certain pieces of equipment offer bonuses to match performance, and some are required to unlock special abilities acquired through training. Players can also invite friends or random Facebook users to join their team, which presents the opportunity for better performance than with the default players provided.（source:insidesocialgames）

The game puts players in the role of Domo, a food-obsessed creature that travels the world searching for a mythical Giant Strawberry Cheesecake. Core gameplay involves spending energy to click on locations that the player can then “harvest” for virtual currency, special items, experience points, slices of cheesecake, and pieces of postcards that eventually unlock more areas for Domo to visit. Planet Domo also features several mini-game types including a jigsaw puzzle simulation and player-versus-player activities like an egg-and-spoon race.

The social features come from gifting and from PvP gameplay. In the PvP matches, the player is pitted against another player’s Domo in an asynchronous simulation represented by an animation. A win or loss depends heavily on what offensive and defensive items a player has available, but players can only view their opponent Domo’s equipment after a match ends. Players are limited in how many PvP matches they can play per session both by a Stamina meter and by Domo’s Hit Points. As the player levels up their Domo, they can spend experience points on Stamina and HP as well as purchasing offensive and defensive items to equip.

Planet Domo monetizes through a standard currency of Coins and uses Facebook Credits as its premium currency. Facebook Credits mainly go toward accelerating gameplay by unlocking locations early and can also be spent on premium items, gameplay boosts and energy refills. Note that certain items in the game are also available in exchange for other types of resources; energy refills, for example, can be bought with slices of cheesecake as well as with Facebook Credits.（source:insidesocialgames）

Pac-Man is the latest in Japanese video game developer/publisher Namco Bandai‘s range of games for Facebook, following up titles such as New Rally-X S and Dig-Dug S. The game launched to the public on June 5.

The game is monetized in one way only — Facebook Credits for Continues. This differs from other arcade games on Facebook where virtual currency can be spent on power-ups or gameplay boosts. Pac-Man instead relies on the same method old arcades used to keep patrons pumping quarters into machines in order to prolong gameplay. Pac-Man for Facebook allows players to start the game for free, but should they die, the game asks for 10 Facebook Credits to continue where they left off. This means those willing to spend money on their play sessions will be able to rack up enormous scores simply by paying repeatedly for Continues.

As the game has only just opened to the public, Namco Bandai is running an opening sale, with Continue credits available for 3 Facebook Credits instead of the usual 10. Liking Pac-Man on Facebook also provides players with a free Continue credit for use whenever they like.（source:insidesocialgames）

Farther down the rankings, we see a slew of ‘Ville-titled citybuilding simulation games duking it out for DAU growth.

It should be noted that Facebook is experiencing some reporting delays of late that may impact today’s DAU rankings. No new traffic numbers were reported for the period of June 2 through June 5 and now we’re seeing a lack of updated figures for the period between June 6 and June 7. At time of writing, these rankings are based on the last-reported figures from June 6.

Of the ‘Ville games, many of these are familiar. FarmVille is still seeing some slight growth despite an overall decline following the conclusion of a Lady Gaga campaign. Its Zynga siblings CityVille and FrontierVille also saw DAU spikes this week.

New to this list, meanwhile, is Kobojo’s PyramidVille, which also showed up on our top 20 list of fastest-growing games by monthly active users this week. The game launched in January with a very basic gameplay structure similar to FrontierVille where players straddle a farming simulation combined with citybuilding to create a thriving Egyptian town. PyramidVille recently added Italian and Spanish language versions, consistent with the expansion plans Kobojo shared with us after closing a $7.5 million round of funding, and a new feature around godlike-powers fueled by a new in-game resource earned through gameplay. We’re still waiting to hear when a mobile version of the game will be made available.（source:insidesocialgames）

TweetAnd that’s the power of the law, kids. Zynga just announced on Facebook that it’s first FrontierVille expansion, Oregon Trail, will now be known as “Pioneer Trail.” The Learning Company, which created the classic adventure game of the same name (and helped with the new Facebook game) sans the “FrontierVille,” smacked Zynga with a lawsuit over the use of the term.

In response, the company decided to change the name to avoid legal consequences, and put the new title up to a vote by us, the players.

Now that the results are in, the company already drew up a new logo. Well, it changed the lettering, really, but it’s new nonetheless. Zynga didn’t announce a launch, but simply wrote,”FrontierVille’s Pioneer Trail is coming to your homestead soon! Get ready for a new grand adventure for you and your friends!” At this point, the expansion can’t be too far away, so keep your eyes glued right here for when the big day arrives.（source:games）

6）E3 2011: Playdom’s City of Might goes to war with Zynga’s Empires & Allies this summer

Don’t they say imitation is the sincerest form of flattery? I hope Zynga will feel mighty flattered then, as Playdom unveiled a new Facebook game at E3 this year – City of Might. During my limited demo of the game (I wasn’t actually allowed to play, but rather was shown a scripted series of events), I learned that City of Might combines the city-building elements of City of Wonder with resource management and player-vs-player combat. Instantly, we’re left with comparisons to Zynga’s Empires & Allies which just launched days ago.

For City of Might, you’ll need to collect resources to build more units, and can then use those units to plan and execute invasion strategies on other players. While combat is a bit interactive, it’s mostly cinematic, and you’ll only be able to place your units on the enemies’ maps and then add more units mid-battle if your troops wind up defeated. From what I saw, it appeared that the rest of battle was automated, as each side shows their damage as small numbers that float rapidly up from the unit or building in question. If you don’t succeed your first time in battle, you can call in the help of friends for a rematch. These friends will allow you to earn bonuses to your damage and armor stats, giving you a better chance at success. There are air and ground units to choose from, but this demo didn’t make it clear as to whether naval units would complete the expected trio.

Where City of Might looks to have a one-up on Zynga is through the use of an in-game chat system, allowing you to interact in real time with other players, whether they are your Facebook friends or not. In this way, you won’t have to have tons of personal friends playing the game on Facebook to actually play the game with other real people.

As for an expected launch, we can look to see City of Might drop its first bomb on Facebook later this summer. We know there are many more features still being completed that will eventually be added to the game, but details are heavily under wraps as of right now. You can see a small preview of what the game looks like at the top of this post, but we’ll make sure to give you a more in-depth overview of the game as we get closer to launch.（source:games）

TweetYou know, that hottie from Superbad? As it turns out, Emma Stone was addicted to FarmVille as much as we are now–back in the day. In an interview with ELLE, Stone candidly admitted that she was addicted to Zynga’s iconic Facebook farming sim for some time.

“I got to level 42, and I wasn’t doing anything else anymore, so I had to stop,” Stone told ELLE. Emma, trust us, we know you feel. (It’s just the stopping part we haven’t got down pat just yet.) And something tells us Zynga will blow up her agent’s phone any day now.（source:games）