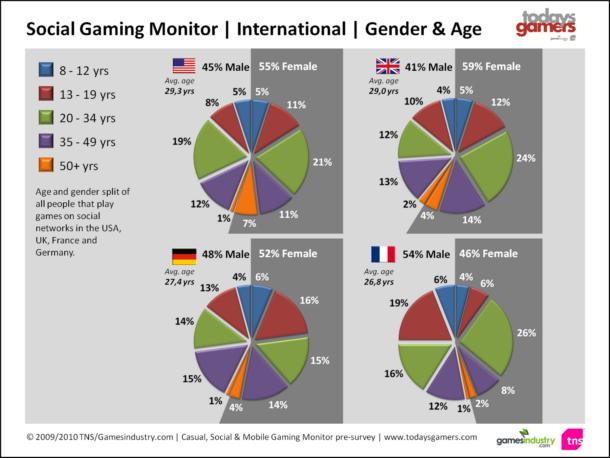 Consumer data from Newzoo’s new Social Gaming Monitor 2010 shows a large overlap between two favourite pastimes: playing computer games and using social networks. Of all 28.2 million British social network users, 90% also plays computer games. Vice versa, 78% of all 32.5 million Brits that play games are active on social networks. As such, it’s not surprising that an increasing number of “social games” are offered through platforms such as Facebook. The survey reveals that 61% of all social network users play games within the network adding up to 17.5 million British social gamers. This is 42% of the total online population aged ten years and up; a percentage almost matched by the US (41%) and leaving Germany (30%), France (35%), Netherlands (27%) and Belgium (35%) behind.

The majority of games on social networks are free to play. Money is spent on in-game items, additional levels and giving friends virtual gifts to enhance their game experience. The share of people willing to do this is comparable to traditional game websites and ranges from 12% in the Netherlands to 32% in Germany. The UK and US are in-between. Social games are most popular with women – 56% of all social gamers – but men are more likely to spend money, making up 65% of paying social gamers.

Alex Agostini, Director of Business Development at social games publisher 6Waves comments: “2010 will be a year of transition for most social gaming companies. Transition from management of explosive growth to search of higher efficiency”

It is hard not to run into a social game when active on a social network but there are signs that social games are attracting a steady crowd. More than half (54%) of UK social gamers plays three or more games a month and exactly half (50%) plays frequently: three or more days a week. There is room for growth too, as only 23% spend more than an hour a day on social games and 48% play a single game not more than a period of four weeks. But with 61% of social gamers stating Facebook as their main online gaming destination there is no question that social networks provide an opportunity as well as a challenge to all “traditional” console and online game platforms.

Peter Warman, MD of Newzoo adds: “There is no game company out there that does not have social networks high on the agenda. The big question is if playing games on social networks is tapping into a new group of consumers, adding more time and money spent to existing gamers or taking time , players and budget away from game websites and consoles. The same accounts for iPhone, iPod and iPad gaming. With our surveys we aim to get a grip on these major shifts in the games market.”