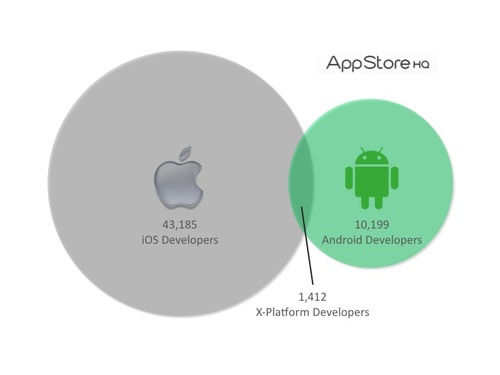 It makes sense for AppStoreHQ to promote support for Android Market.

Though the directory lists apps across multiple platforms – iPhone, iPad and Android all included – its Android database is perhaps the most useful, with Google’s own browser-based presence far less encompassing than Apple’s web-based variant.

It’s the idea that developers are exclusive to one format or the other that AppStoreHQ wants to dismiss, however, publishing statistics that suggest more than 1,400 studios have apps listed on both marketplaces.

“Of the nearly 55,000 mobile developers in our database, 1,412 had already published apps on both iOS and Android,” the firm says on its blog.

AppStoreHQ claims it’s been moved to published the statistics to back up a mobile developer survey that suggested developers on both platforms have no sense of loyalty when choosing with format to work on.

They simply want to make money.

According to the numbers from Appcelerator, 78 percent of polled developers perceive iOS as having the best near-term outlook.

Looking forward though, 54 percent dubbed Android as having the best long-term outlook.

“As strong as Apple’s current hand is, developers can read the news, and Android has been making headlines lately as a growing threat to Apple’s dominance,” AppStoreHQ says of the findings.

The firm claims its figures should dispel the view propagated by ‘fanboys’ that developers voluntarily tie themselves to one format or another, going so far as to publish a list of the 100 most talked about cross platform mobile developers.

“Smartphone developers want to build for the platform that will deliver the biggest bang for their effort,” AppStoreHQ concludes.

“Right now that’s iOS, but as our cross-platform analysis suggests, many of the strongest iPhone publishers have already added Android to their portfolio.”