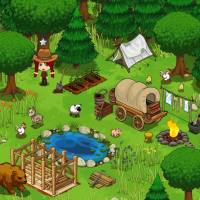 Though Zynga’s most popular game, FarmVille, continues to lose millions of users every week, the opposite is true for the developer’s pioneer sim FrontierVille. Released early last month, FrontierVille  already has 13.7 million monthly active users, 4.3 million of which started playing this week, and is currently the fastest growing Facebook game.

At number two is Verdonia, Playdom’s strategy game that has players managing a kingdom and its army. The title picked up 1.4 million users in the past week, growing its audience 180.4 percent to nearly 2.2 million.

Digital Chocolate’s city-building title Millionaire City has seen a surge of players recently and is the third fastest growing game on the social network, more than doubling its audience after adding 858,171 players in the past week, now boasting a total of 1.6 million.

EA Sports FIFA Superstars from Electronic Arts and Playfish continues to benefit from the ongoing World Cup, sitting at number four and bringing in 705,738 new players this week, a 30 percent increase that brings its total amount of monthly active users up to 3 million.