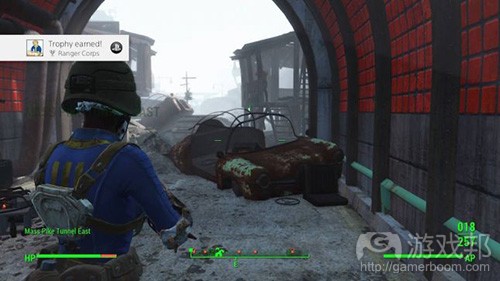 Emotional Wreckage: My Emotional Journey through the Wastes of Fallout 4

My extremely emotional journey through the world of Fallout 4 (Naturally, Fallout 4 Spoilers Ahead, so be forewarned):

I beat Fallout 4 over the weekend. I’ve been playing it for a long time. One of the reasons that I took so long to finish it is I was deeply emotionally invested in the settlement crafting system, something new to the Fallout games.

When the game starts, like all Fallout games, you choose your gender and whatnot. I was a guy in the last open world game I played (Dragon Age: Inquisition), and I tend to alternate back and forth between guys and gals in games that offer the choice. Almost without fail, it seems to make very little difference which gender you pick, but I alternate just because I can because it’s there. So this time, I picked a woman for Fallout 4. As it turns out, the game starts off with your infant son being kidnapped. Maybe it’s the fact that I’m a dad now, or that I have a second baby on the way, but this made me go full-on Mama Grizzly on that game. I was going to find my son and bring him home. No one takes my baby away from me.

When I learned that you can craft your own towns and settlements, I immediately set about trying to tame the Wasteland. I wanted to carve out a safe space for my infant son for when I got him back. I rebuilt a house, and I made sure to make it as nice and inviting as I possibly could. I started nesting.

In the world of 2277, that’s not an easy task. It means fighting people and robots and nuclear scorpions that want to kill me. It means marching out into an irradiated wilderness just so that I can murder Raiders and Super Mutants in the hopes that they’d have wooden alphabet blocks I could scavenge for my infant son. I means scouring the world for duct tape so that I can break it down into cloth and build my son a bed. The postapocalytic Wasteland of 2277 doesn’t have much to offer children, but sometimes I could find antique pre-Wasteland toys. Dirty, scuffed toys and trophies are commonplace: toy aliens, toy cars, baseball gloves, teddy bears. But they’re grimy. Want a globe? You can find thrashed globes all over the Commonwealth.

And then, in typical Fallout fashion, I found out that things weren’t going to be what I wished they were. My son had been stolen from me while I was cryogenically frozen. He grew up. He lived his own life as the director of the secretive Institute, a subterranean technological paradise. Even if he weren’t an 60 year-old man, my precious Shaun would have zero interest in coming to live above ground in the irradiated glorified garbage dump I’d built. Sure, it was the nicest garbage heap on the surface. But it was still scavenged from trash. My son, however, was the director of a world free of filth and radiation, a world he himself had carved out of the Wasteland with cleanrooms and labcoats. We never knew each other, and still he was so very much like me.

After finally finding and being reunited with Shaun, I would sometimes visit the room I’d built for my son and stand in the doorway disappointed. Bethesda created a game and a system by which I’d become completely emotionally invested in collecting garbage. I would stand in the doorway and feel a sense of mourning for the son I never was given the ability to raise.

And as the game when on, I came to despise the man he grew into. We became enemies. I eventually lead the army that marched on his Institute and destroyed their entire way of life. I found myself shooting up The Institute and thinking angrily about that room I’d built, with all the treasures I’d risked my life to collect and the inadvertent shrine I’d created to a child I’d not been allowed to raise.

As I was about to leave and never come back, moments from nuking the Institute entirely, I was confronted with a synthetic robotic version of my son. There he was: 10 years old, calling me Mom and asking me to save him.

I rescued Shaun and took him to Sanctuary Hills where I’d built him his room, where his pristine toys and books and hard-fought comfort existed in the center of a town called Sanctuary. I deliberately put away my weapons, and my armor, and my tools of war. I took off my Vault suit for the first time and put on the T-Shirt and Slacks that I’d collected for just this moment: the moment when I could put the fighting aside and just be Shaun’s Mom.

There was only one thing left to do: assign Shaun to the bed in his room so that he could be home and safe and protected.

“You cannot command this resource.” read the screen. Despite all of my hard work, I can’t tell Shaun where his bed is. Shaun cannot be made to go into his room. Ever.

And in doing so, my emotional rollercoaster with Fallout 4 continued. Like all children, you can’t make them do what you want. You can only try your best to create a nice life for them and give them the resources they need to flourish. They’ll live their own lives, though. Even if it’s 100 yeards from where you want them to be.