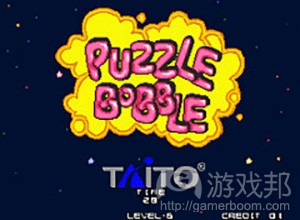 A Look At Puzzle Games

One year, at the Austin Game Conference, I was exhausted, not from partying, but because I had stayed up all night trying to progress through Puzzle Bobble. My college friend had the original arcade machine and since I could use the same quarter over and over, I stayed with it. I noticed almost immediately spikes in difficulty, remarking how I felt that one level was out of place because it was especially hard and the levels after it were easy in comparison. Considering that the player also gains proficiency, gauging the increase in difficulty or challenge between levels must be an interesting exercise.

In addition, there is a luck variable to these puzzles since colors can randomly get scarce on you. It’s the same way with Candy Crush Saga, that when you need red candies, you feel like all the other colors keep on showing up. I especially hate using up moves while waiting for a certain color to show up in a line. This probably contributed to my decision to delete Blossom Blast Saga.

I mean, I do have a certain amount of patience with difficult puzzles and in most free-to-play games, a player may have access to power-ups or boosters that can make uneven level design tolerable, but when my puzzle-solving efforts feel like frustration rather than fun, then I’ll just quit. Especially when I feel like it’s a luck-related factor.

Candy Crush Saga showers me with free gifts, but that’s not the only reason why I still play Candy Crush. I fully realize Candy Crush Saga has that luck component but despite that, I still manage to have fun with it. The way the levels are designed, I always feel like I have a chance at solving the puzzle because I’ll be one or two moves out. That motivates me to keep on playing because sooner or later, I’ll feel like I’ll solve it, even if it takes a long time. If I don’t see that possibility of winning, then I’ll throw my hands figuratively in the air and mutter, “This is impossible!” I can see why players are motivated to buy extra moves because it’s almost … just almost… there. Unlike with Candy Crush Jelly Saga, another I deleted, I did have those boosters in Candy Crush Saga, so if I did feel like I had come across an impossible level, I could help myself out.

I also play Candy Crush Soda Saga, which I like better, even though there aren’t free boosters given out there. I’ve noticed that after I’ve been at a puzzle for a long time on Candy Crush Saga, something remarkable will happen such as a color ball and a color bomb ending up next to each other. I have no idea if that was just the allotted time needed for this lucky occurrence to happen or if the designers were specifically thinking about helping me along. It would be great if this were a matter of design.

In the past, I was in charge of designing a mah jong solitaire game. In those types of games, there are the ones where it’s possible for the player to have a puzzle without a solution. Alternately, there are the ones that use an algorithm to make sure there was always a solution to the puzzle. I suppose in the former, a player would be able to get out of that unsolvable state with a booster. I chose the latter because I always wanted players to be able to win without using boosters. It seems unfair that the player could be presented with a puzzle that couldn’t be solved without a booster. After all, I wanted the player to stick around for the next level or game.

Challenge is great, but too much challenge leads to frustration, which can lose players.（source：gamasutra）