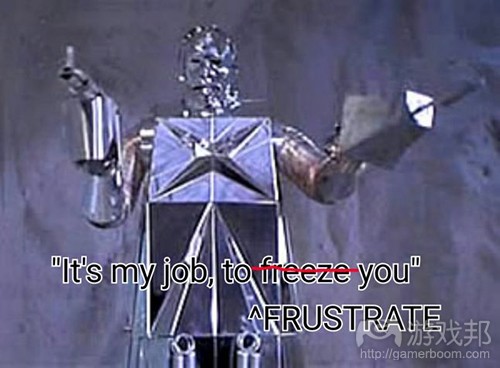 The Price of Frustration

A former USA Olympic weightlifting coach once told me that when they started experimenting in secret with anabolic steroids, the visible results were so striking that they got a lot of questions from observers. Why were they so big? What was their new strength training secret? “Isometrics” was the answer. This is where you hold a static contraction as long as you can. It’s one of the worst possible ways to train as it leads to very limited strength gains and puts the athlete at risk of cardiac hypertrophy or even outright heart attack.

But the public bought it and even today when I am in gyms I see personal trainers teaching isometrics to their clients. This is some 50 years later. They don’t know why they are teaching isometrics, but they know that they’ve seen people doing them in the gym their whole lives so they must be good.

When Zynga became hugely successful on Facebook, they publicly attributed it to two things. “Fun Pain” and aggressive data collection. I’ve already addressed the limitations of business intelligence (BI) in the gaming space in previous articles, and I briefly discussed fun pain in my 2011 “Two Contrasting Views of Monetization”.

Both ideas are still intensely pervasive in the gaming space years after the Zynga implosion, and more than 5 years since I predicted this and discussed the real reasons for Zynga’s success in my 2011 “Zynga Analysis” paper which I wrote for 2K Games and later published.

How do you make a consumer pay for something you already gave them for free? It’s not an easy question to answer, and the solution coming from Zynga was that if you didn’t make a player uncomfortable enough, they wouldn’t spend. If you made them too uncomfortable they would churn out. But somewhere in the middle…there was this Holy Grail spot where you could make players spend and they wouldn’t be able to stop themselves. Finding this spot was the job of BI. Well the spot turned out to be mythical so millions (if not billions) spent on BI never found it and conversion rates stayed at a tragic <2% level.

There are signs that developers are waking up to the reality that perhaps you can actually make more money from players that are not frustrated while playing their games. This transition is not easy, because for every team member who says “why do we want to frustrate our players?” there will be two team members who will champion a pro-frustration mechanic, because “that’s what we do”.

I saw this struggle play out as I was enjoying the recent “free weekend” for Elder Scrolls Online on Steam. The game originally launched with the archaic “retail plus subscription” business model, but they tried to also capture some microtransactions on top of that, much in the way Arena.net did with Guildwars 2. A year later they made the subscription “optional”, and the retail price is inching towards $0 (but officially still at $29.99 on Steam).

I had a lot of fun playing ESO. I love exploring dangerous and dark locations and being rewarded by finding loot in really weird places. I most enjoyed collecting bugs which I could later use for either fishing bait or for alchemy recipes. Even junk items like old swords or shields had some value because I could break them down for materials and craft xp back in town. The early game economy was much better designed than what was done for Guildwars 2. If you are curious how I analyzed the Guildwars 2 economy, you can read that here.

The problem I ran into was that the inventory space is extremely limited (60 bag spaces and 60 bank spaces), so even with stopping quests and running back to the bank (tripling the time to complete quests) to offload items, I ended up being “inventory locked” after five hours. Inventory lock occurs when you have to destroy something valuable every time you want to pick up something else that might be more valuable. People don’t like being forced to destroy their own valuables, and having to choose which one survives and which doesn’t. It’s one of the most frustrating things you can subject a person to. It’s like reward removal but even worse because instead of just taking away something you just gave the player, you make the player have to choose what to destroy. It might be something the player has been lugging around for hours or days.

And it is there by design.

Just as in Guildwars 2 the dev team decided to frustrate players by offering them a game where they would experience inventory lock and then be frustrated into buying additional inventory space. Spending more than $5 for 10 more inventory spaces would have delayed inventory lock by perhaps another hour. This game demands at least 500 inventory spaces, and if you play for a year I can imagine needing over 2000. When I saw this mechanic I was ready to quit a game that I was really enjoying for the first few hours.

The game also allows the player do everything themselves, and thus fosters no interdependency. This is a problem because it creates a Massively Singleplayer environment. More detail on why that is bad can be found in my Star Wars: TOR review.

But there is a light at the end of the tunnel here. The development team must have seen the problems and reacted with the “ESO craft bag”. This is quite brilliant and player friendly. It automatically sucks all crafting materials (which is the vast majority of what you will pick up) into an infinite bank space that all your characters share. You don’t have to run to town or anything, it happens instantly and automatically. When you craft something, it draws from this craft bag without you having to open it.

Now with the craft bag, the player is free to actually play and enjoy the game without spending most of their time frustrated while they deal with inventory management issues. This is quite liberating and clearly a victory for the “anti-frustration” faction at Bethesda. I’m sure it was hotly contested back in the design room. The compromise that allowed it into the game was to make it “subscription only”. So yea you can play the game for free for about 5 hours until inventory lock, and then you have to pay for the subscription to keep playing without constant extreme frustration.

It would be nice if Bethesda was more transparent about how limited gameplay is without the subscription, but by (current) industry standards, this product now gives a lot of value to the consumer if they are willing to pay every month for an epic high quality RPG instead of paying once.

Following the victory of the anti-frustration camp at Bethesda, the BI team is no doubt reporting much better metrics coming out of the game. These are the numbers they were hoping for at launch. Better late than never, and now that the game is player-friendly, ZeniMax has decided to essentially “relaunch” the game with a new round of marketing funds.

So if you are in a studio right now making a game, and wondering “why am I being asked to frustrate my players?” Well now you know. If you don’t like it, say something. You might get shamed at first, but your voice could lead later to product success and a nice promotion. This is perhaps a selfish suggestion on my part, because when I talk to studio heads and they ask me for the game equivalent of an “isometrics coach”, this is a really awkward situation for me that I have not figured out a politically correct solution for.(source:gamasutra)