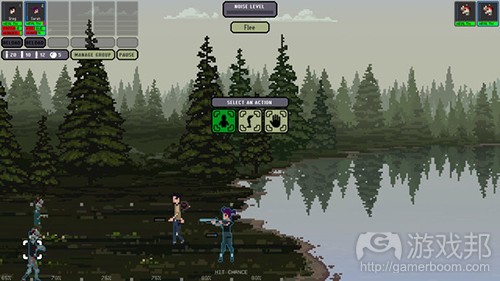 march of the living(from steampowered)

The financial reality of being indie and doing just okay

My game March of the Living made more money than I have ever seen in my life if you look at the gross revenue. Of course, once you remove Steam’s cut and then split what remains with the publisher, what is left will be more or less the same kind of salary I was making when I had a day job. It haven’t been a year since the game was released and it can be tricky to make predictions so I don’t know for sure what the picture will be on the game’s first anniversary.

When seeing the results during the first week of release, I thought sales would be much higher six months later, specially that the game was well received. One thing I learned is to be much more careful when trying to make predictions. In fact, six months later I can say that 67% of the money the game made was during its first week of release and 80% during the first month…

This uncertainty when you released a game with that kind of results can be a challenge if your objective is to remain a full-time indie dev.

Taking the long tail with a grain of salt

Have you ever heard “Your game will do fine over X months or years…”? When you just released your first moderate success and are counting on the money it makes to pay the bills in the present, the long tail isn’t your primary concern. It sure is nice if your game can make $300,000 over 5 years but it still doesn’t help you right here, right now.

The long tail can also be a very short tail. I have two other games on Steam that I released in 2015 that are now pretty much dead. They were not successes when I released them so they have little to no effect on my current financial situation. They still make a bit of money from time to time but nothing I can rely on.

Things get even more complicated as your revenue may vary a lot from month to month. Many weeks you’ll sell just a few copies or none at all and only during special sales will you suddenly see an increase in sales. It means that you really have to be careful with your money and always have to make sure you somehow managed to keep a safety cushion as some months will be really thin.

It’s not that the long tail should be dismissed as this might eventually be how you manage to remain a full-time indie dev once you have released a few games that are doing reasonably well but when you just got your first game that should be doing fine over a few years, it still doesn’t fix the present.

Managing risks and dealing with unpredictability

So you decided you want to remain a full-time indie dev and are carefully setting money aside for when sales won’t be so great. How much money do you have left to work on your next project once the bills are paid? Probably not a lot as remember, you don’t get the money all at once. Of course, if you released a hit that sold 50,000+ copies in a month then it might be a different story…

You are now entering the realm of risks management. How much can I reasonably risk assuming I’ll keep making an undetermined amount of money in the future? Some are more adventurous than others so it really comes down to your tolerance to risk. Two persons in the same situation might have completely opposite reactions based on their personalities. Your life situation can also have a big impact on how you react. If you have kids, a house and other financial engagements then you might not want to risk as much as when you were younger and had less responsibilities.

Considering all of the above, I have to conclude that my own tolerance to risk is pretty low. This can be a problem as this might mean I’m missing opportunities but I’m not one to bet everything I just made hoping the next game will do even better as I’ve seen way too many games that were supposed to do well ending up being disappointments. Even successful devs don’t know for sure how well their next game will perform and I’ve seen quite a few scratching their head wondering what the hell just happened when they thought they had a solid game that did poorly.

When dealing with risk management you always have to keep in mind that you can’t really predict what might be coming or not. At best you should always consider the most pessimist scenario when making decisions. For example, it could have been easy for me to think that March of the Living would make quite some money by being selected to be part of the Halloween sale this year (based on results from other devs it’s an event that is doing quite well). The game is relatively new, it’s doing okay and it fits the theme perfectly so how much did it make during this sale? Well, it wasn’t selected to appear on the Halloween page so it didn’t make much at all (less than a weeklong deal). I can’t even say that it wasn’t selected because it’s not doing well enough as I know of at least one game that was selected and that performed a lot less than March of the Living on its release day. So why wasn’t it selected then? Lack of luck I guess…

The lesson here is to not put too much hope on things you don’t control. Good if you’re lucky but you shouldn’t count on getting lucky as part of your business plan as obvious as it might sound.

Talking to other indie devs, many feel like they’re back to square one after releasing a game. You made money to pay the bills but can’t quite put the necessary resources on “that great idea you have”. In my case, I find myself in the exact same position I was when I lost my day job and needed a publisher to make any project possible. That’s not being as “indie” as I’d like it to be…

If you have to rely on a publisher to keep going forward then it means you are raising the bar of the level of success you must achieve to make just enough money as you’re most likely giving up half of your revenue or more (often publishers will have different percentage of revenue distribution until they recoup their money). For example, if I would have been able to release March of the Living without a publisher then my financial situation would be quite different. I’d be able to fund my next project without any help and pay for living expenses for at least two years before really having to get “new” money. Of course I try not to think too much about that as without a publisher this game wouldn’t have been possible anyway.

This can become a vicious cycle as it’s already difficult to release a game doing okay but if you need it to do twice as well so you can become truly independent then you might have to rely on a publisher for quite a long time.

This is why you see so many indie games with publishers backing them. We all like to think about games that were big hits and provided quick financial independence to the devs but it’s often something that took years to achieve. Reaching self-sustainability isn’t easy and often cannot be done by just doing okay.

This is nothing new

Many indie devs could have written about this (or already have), it’s simply not making the headlines. “Indie dev doing okay but still struggling” probably isn’t a title that would get many clicks.

I’m pretty sure most people know that this is not an easy business to dive into and I surely knew it for having released quite some not so successful games over nine years but I think we can easily become numb to this fact when we keep hearing about success stories. I’m the first to admit that I’ve been guilty of this at times.

Like anyone else, I surely wouldn’t mind to release a big hit but my first objective was always to just make a decent living. To do okay with the additional bonus of working on what I want when I want to. Now that I’m at this point though, I’m realizing that things are not as bright as I thought they’d be.

I’ve been hearing about indie devs dealing with regular anxiety issues and I frankly didn’t understand them as they were doing what I was hoping to do one day. I may have even been quick to judge them in a way I now regret as now that I’m in their shoes, I’m dealing with the exact same issues. It shows that even when you’re told something, you don’t always listen or even refuse to…（source：gamasutra）