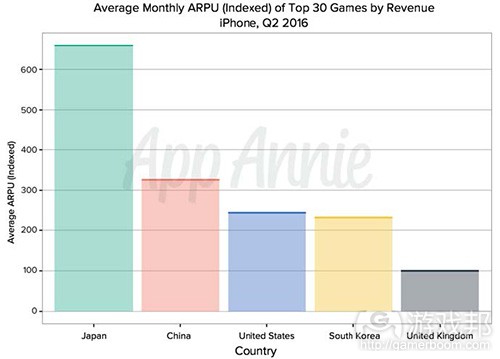 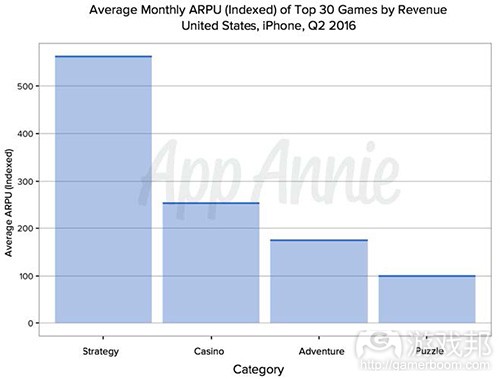 I was a little bit surprised at the first glance since we couldn’t really conclude the performance of a game or fully understand its strength and weakness by looking solely at ARPU.

While you are reading this article, I guess you know what ARPU is. Just in case, it is “Average Revenue Per User”, saying, the total revenue earned in a set interval divided by the number of unique users in that interval. You can use any interval you want, week, month, etc., as long as you count unique users by the interval you choose for that metric.

In order to better gauge the performance of a game, we need to check out at least its total revenue, which means we need not only the ARPU, but also the monthly active users of it. Furthermore, to get a better picture, you should also take the retention rate of your game into account to understand its LTV.

So, at the beginning I was worrying that the newly released AppAnnie report would be misleading to some of the readers. Then I kept reading deeper and found out that the report only considered the most revenue making games and also take MAU into account. Then its point makes sense to me.

Even though ARPU alone can’t fully tell the performance of a game, it can reflect the potential of the genre in a particular market to some extent. You can tell how much money a user may be willing to pay for a particular genre in a particular market. You can use it as one of the indicators if you want to create a new game or to get into a new market. But still, you should also check out the download size and other metrics, such as CPA, in that market of the particular target audience to get a big picture of it. The latest report released by AppAnnie demonstrates the ARPU trend of five key mobile markets (Japan, China, US, Korea, and UK). The report only provides the statistics of iPhone, yet we still can get some insights of the big picture of the global mobile game market. Among the five key markets, China became No.2 worldwide in Q2 2016 ARPU with MMORPG making up some highest ranked titles; also, four of the top five ARPU games in China are MMORPGs. In addition to the four top MMORPG titles, increasing numbers of successful PC-based MMORPGs are now entering the mobile realm with new contents added. With successful IP and existing large audience, those MMORPGs, such as the JX series from Seasun Games, are flourishing on mobile platforms as well. The statistics, again, reinforce my statement in my previous article that MMORPG is the top game genre in China.

Looking at the US market, Strategy game became the top ARPU performer in Q2 2016, with more than doubled ARPU as No.2, Casino game. The players of Strategy game are mostly engaged and enthusiastic, which helps bringing the genre to the top of the list. This also reassures my point in my previous article that Strategy game would be one of the best choices for the mobile game production team to create a new game.

You can download the original report in English from here.

You can download the original report in Chinese from here.

You can check out my other Blog Posts here

Seasun is a leading Chinese online games publisher focused on creating high quality games/game engines that push the boundaries of player experience in action entertainment. The company is also involved in small-medium sized investments for game studios worldwide. We have recently started up our U.S. studio in Redwood City, CA to create top quality content for the western market.

Seasun has shipped many successful titles, including the popular MMORPG series JX (http://jx3.xoyo.com/), the MMOARPG titles First Myth (http://fs.xoyo.com/index1) and CQ (http://cq.xoyo.com/), along with our FPS MAT (http://xd.xoyo.com/). The “JX” series has grossed more than $250 million and has achieved a daily active user count of 3.3 million. We are currently building a special team of highly talented people to create the technology for our next-generation MMOARPG at this studio.