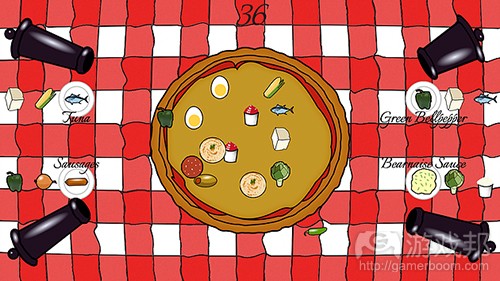 In Pizzed-a-Pizza, up to four players shoot their favorite toppings onto a pizza, while shooting the other players’ toppings off the pizza. When the 60-second timer runs out, the game orders a REAL-LIFE pizza in the REAL WORLD with the toppings that are still on the virtual pizza.
I love the idea for this game. It’s definitely the best and most fun game jam idea I’ve ever worked on. The game is not polished at all. The art and sound could use some work. The game mechanic of shooting toppings itself isn’t terribly interesting and should be remade completely. The name of the game is awful. But the fact that the game orders a real pizza fascinates me tremendously.

It is a fun experience – you will often end up with a pizza with gross combinations, like tuna, eggs and meat sauce – but also a powerful feeling, somehow much more magical than VR or AR. It gives the game weight, makes it feel real; because, in a way, it is real. We don’t know what to call the concept (we’ve toyed with Real Virtuality, but it seems to be taken. It did, however, feel like it had heaps of potential.

VR is all about putting the player and sometimes other items as well inside the game, about immersing yourself in the game. That’s all good and well and exciting and can lead to amazing new experiences that I can’t wait to play and maybe even make. But it can also at the same time feel contained. In VR there is the game, and that is that. The more you forget the world around you, the better.

Because we would all like the Pokémon to actually be real

Augmented Reality games, made a world-wide household phenomenon by Pokémon Go recently, are more inclusive of the real world. Instead of putting only the player inside the game, they put the whole world inside the game. Many (including me!) thinks this is crazy cool as it combines the real world and the virtual, creating new ways of looking at the world and new social opportunities along the way.

However, the experiences current AR games are creating feel similar to VR – they are forgetting to use what is in the world already. They are focusing too much on the game and not enough on the reality around it. I think they could be creating a more direct and meaningful link between the game world and our world.

The act of playing the quite simple topping-shooting game became infinitely more intense, when you knew you would have to buy and eat the resulting pizza. At the same time, the act of ordering a pizza got a lot more entertaining.

I think it’s the same joy of a game turning real that makes Geocaching so appealing to me. Geocaching is in a lot of ways quite similar to Pokémon Go, but the big (BIG) difference is that you actually find real-world items in the end. All the experiences I’ve had from Geocaching have for this single reason been deeper than the ones I’ve had from finding virtual Pokémon.

It seems there are still many unexplored ways in which games and the real world can interact, some of which might be even more interesting than VR and the AR we have right now. It probably won’t be in the form of pizza-ordering jam games but hopefully in a million other ways. I hope people will experiment more with this and find more ways games can make the real world even more exciting – and vice versa.

Pizzed-a-Pizza was made in 48 hours for Nordic Game Jam 2016 with friends from my school, Vallekilde H?jskole: Mikkel Ravnholt (programming the actual real-life pizza-ordering, essentially by making a bot that could order pizzas through websites based on specific criterias – we had to find a pizzeria that didn’t use captcha!), Sigurd Bengtson (music), Emil Ekstr?m (art), Frederik Goth (art) and Martin Lund Lauritsen (art). I programmed the game itself in Unity.

You can play it here, but it only worked for one pizzeria. They now changed their website, so it sadly doesn’t work at all anymore。（source：Gamasutra）