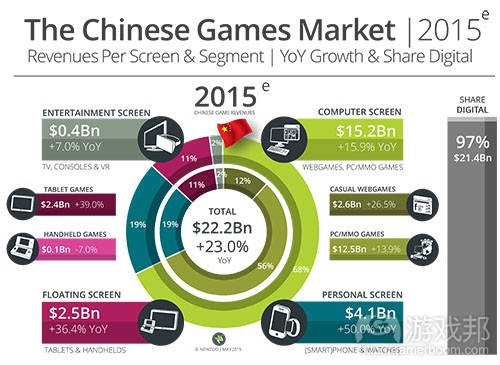 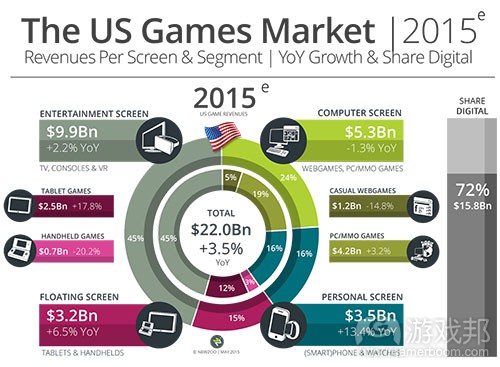 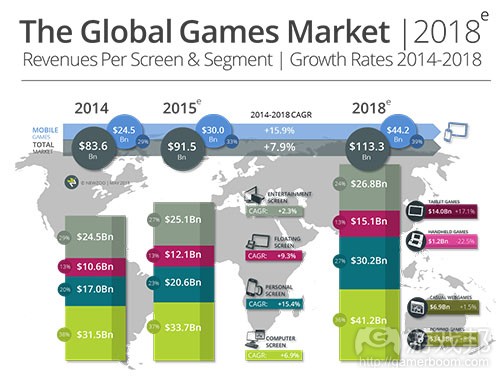 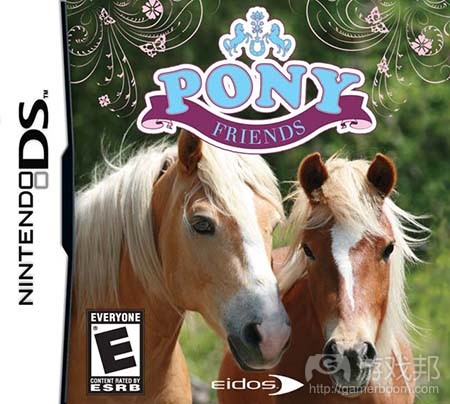 Newsbrief: Electronic Arts bid farewell to longtime company man Frank Gibeau this week, stating in an SEC report (brought to Gamasutra’s attention by CNet’s Ian Sherr) that Gibeau “has chosen to transition on from the company.”

Gibeau has been with the company for nearly 25 years, and told the story of interviewing at its Redwood City headquarters in 1991 as part of the EA retrospective Gamasutra published back in 2007.

It was in that capacity that he recently championed EA’s attempts to prototype smartwatch games, and it’s yet unclear where he’s headed next. （source：gamasutra）

2）Game sales to reach $113B in 2018; about three-quarters of all revenues this year will be digital

China will take over as the top game market in the world this year, according to the upcoming 2015 Global Games Market Report by analyst firm Newzoo.

The company predicts $22.2 billion in sales this year in the Asian country, versus $22 billion in the United States. That gap will widen over the next three years, Newzoo chief executive Peter Warman said, with China ending at $32.8 billion and the more-stable U.S. games market at $24.1 billion.

The change will make a significant shift in what percentage of the global market comes from different types of games, he said.

Because China’s mobile market is still exploding, that segment will help push the overall market percentage of “entertainment screens” — primarily gaming consoles — down to 24 percent globally by 2018 despite that the percentage in the U.S. is, and will remain, around 45 percent.

“Our theory, when we launched our Screen Segmentation [report breakdown] in 2012, was that time and money would divide itself across the four typical screens in an equal manner if every screen turns out to be equally important in a consumer’s life,” Warman said. “Things are moving exactly in this direction; only legacy [trends are] slowing this down.

“On the one hand, cultural legacy in the case of China, with no game tradition on TV because of smaller housing and lack of a console market. On the other hand, legacy in the West, particularly the U.S., where consoles have always dominated and the consoles are left as the only platform that successfully sells boxed products and the premium price upfront model leads.”

Warman expects this trend to change now that running games as a service has become the norm, he said. If the major console players continue to be closed systems tied to traditional retail agreements, he expects that change toward a pure-digital model will be slow, “giving challengers such as Nvidia’s Shield, Amazon’s Fire TV, and Valve’s ‘Steambox’ a chance.”

This year, 49 percent of the $9.9 billion U.S. console gaming market will come from digital sales, Warman said; 83 percent of the $4.2 billion PC and massively multiplayer sales in this country will occur online.

Combined, the two markets are 72 percent digital in the United States, compared to 97 percent in China. (Worldwide, that figure is 78 percent, or $70.9 billion.)

With digital marking the majority of sales, players are increasingly demanding to create content for and modify their favorite games, Warman said.

“In the coming years, successful game companies will be those that understand this broader disruptive consumer-driven trend and are able to distil and incorporate this into their games, services and business models,” he said.

Newzoo also expects e-sports to have an increasing impact on overall game sales, helping to push the games industry over the $200 billion mark within five years with hardware, digital media, event, and merchandising revenue.

It’s notable that “entertainment screens” also include virtual reality headsets — but that they’re not expected to make much of a dent in the market before 2018, Warman said.

“It is very easy to overestimate the short-term revenue potential of VR products,” he said. “Facebook and other giants have invested in this for the very long-term. They cannot afford to miss the shift away from physical interaction with screens to augmented reality, which could take a generation to be adapted by a mass audience.”

The short term potential is limited, and even when it happens, it’s likely to cannibalize PC and console revenues, Warman said. Newzoo predicts VR could take 10 percent — about $3 billion — of the entertainment screen revenues by 2018, a figure that agrees with estimates by U.K. analyst KZero.

Neither VR nor smart gadgets like the Apple Watch (which Newzoo lumps into the “personal screen” segment with phones) will create new markets, Warman said.

“Both will largely tap into the budget game enthusiasts already spend on their favorite pastime,” he said. “Smart phones and tablets created new places and timeslots for people to play games. Smart watches and VR do not. Both will be successful [and] add significant hardware revenues, but let’s be realistic about how much new game revenues will be generated.”

What won’t change is how much PC gaming revenues affect the overall market, the Newzoo report said. The “computer screen” segment will account for 36 percent of the market by 2018, or about $41.2 billion, with a healthy compound annual growth rate of about 7 percent — roughly the same as the games industry as a whole.

That market will be mostly driven by PC and massively multiplayer games (multiplayer online battle arenas, or MOBAs, like League of Legends and MMO role-playing games like World of Warcraft), the report said.

Personal screens, which include smart phones and watches, will grow, reaching 27 percent market share in 2018, or about $30.2 billion. The final category, floating screens, includes tablets and handhelds such as the Nintendo 3DS and PlayStation Vita.

In that category, handheld-related sales are expected to drop by more than 22 percent by 2018, but tablet-related sales will rise by 17 percent, so the overall trend is flat.（source：venturebeat）

3）How Crossy Road’s creator succeeded by making games for his mom, his wife, and a girl who loves horses

The Casual Games Association paid for Jeff Grubb’s trip to Casual Connect Asia, where he is presenting a lecture. Our coverage remains objective.

SINGAPORE — One of the most popular games — mobile or otherwise — in the world right now is Crossy Road. It seemingly came out of nowhere, but its creator says that it actually was born out of a philosophy he honed over a career making software for other people.

Matt Hall, the founder of indie studio Hipster Whale and creator of 2014’s mobile hit Crossy Road, used to want to make games for everybody, he explained during his talk at the Casual Connect Asia conference today (that’s Tuesday in Asia time, folks). That was his philosophy when he started his company, but it’s not the philosophy that he focused on. He realized that he could only truly make a great game if he picked his audience — especially in the ultracompetitive mobile market. And for Hall, this didn’t mean looking at demographics and analytics to see what people are playing. Instead, he looked to the gamers in his life and decided to make games for them.

That started back when he was making the Nintendo DS game Pony Friends for Eidos. When Hall started working on the horse-owning simulator, he tried to figure out who his team should target. He found a picture of a girl with a horse. The young woman didn’t look like the daughter of a rich family who owned horses and participated in equestrian sports. Instead, she just looked like every girl who loves horses, and that’s who Hall thought they should make the game for.

So Hall took the picture of the smiling girl and her horse and printed out dozens of copies and gave one to everyone on the development team to help them understand the target market. And it worked. Pony Friends was a huge hit, and it sold over a million copies worldwide.

Hall credits picking a precise audience for Pony Friends as a big reason for its success. And that led him to repeat that philosophy for his future games.

“When I make a game this way, I don’t have to get bogged down in demographics or store trends,” said Hall. “All I have to do is make a game that is everything for someone.”

Of course, this didn’t always lead to success. Hall gave two examples of games that didn’t perform well — at least at first — despite him sticking to “everything for someone” philosophy.

One is a card game that Hall is still making called Deck War and the other is a hidden-object game called Little Things. For Deck War, Hall decided to pick two people to focus on as his core audience: his daughter and Sony Computer Entertainment America indie-gaming guru Nick Suttner. For his daughter, he made a distinctive art style. For Suttner, a fan of deck-building games, Hall tried to make a deep battle system.

But Hall felt that Deck War didn’t work. The things that he put into it that Suttner would like were not things his daughter necessarily would enjoy. So Hall shelved it in favor of working on Crossy Road — although he said he’s started putting some work into Deck War once again and still plans to release it.

For Little Things, Hall decided to make a game for his mom. Hidden-objects games are extremely popular with women that are 50 or older, and this made her the perfect audience.

Only that actually wasn’t correct.

“These women that are hidden-object fans are just as hardcore about their games as 15 and 16 year olds are about Call of Duty,” said Hall. “They just want the same thing over and over.”

So, when Hall release Little Things on Big Fish Games, a web-based gaming portal, it didn’t do well. He worked on it for a year, but it only made $3,500 in the first month after it came out.

But Little Things got a second chance. When the iPad debuted in 2010, Hall decided to try to release his hidden-object game on that platform, and that worked. That audience was much more open to new takes on such an old style, and they were also hungry for games for their shiny new tablet.

All of those lessons led Hall to Crossy Road. After seeing Flappy Bird and its success, Hall tried to imagine a person who would enjoy that game and tried to make something new for them.

But this makes you wonder: After all these years making games for other people, when will Hall make a game for himself. Well, he’s thought about that, and he might finally have the freedom to do that.

“If I make a game that only appeals to me, that would take a really long time,” said Hall. “I love details. If I did that [earlier in my career], I wouldn’t have had enough money to eat. But now that Crossy Road is done, I hope to do that soon.”（source：venturebeat）